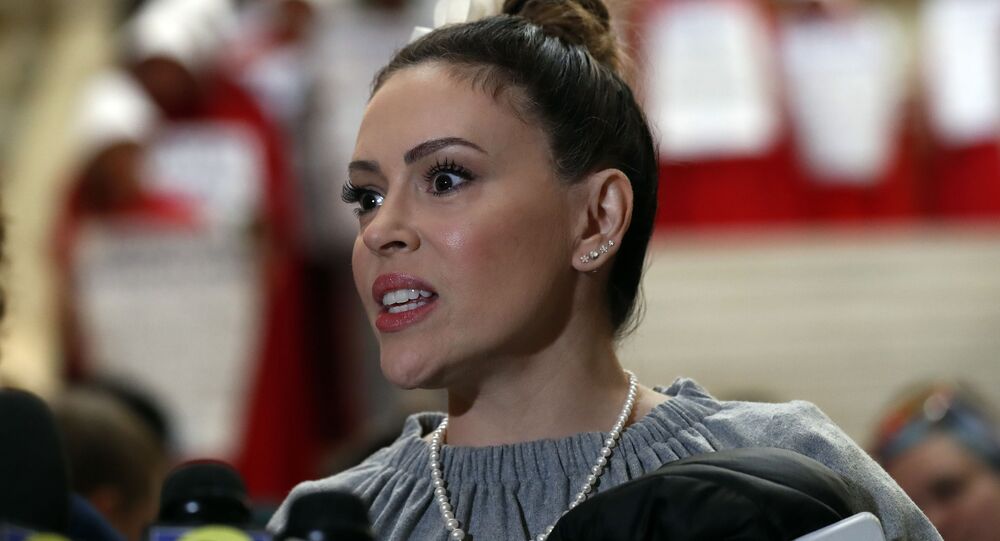 While a number of social media users argued that the pathogen can be called “Chinese”, some also jokingly described it as "Kung Flu".

While quite a few netizens have balked at US President Donald Trump repeatedly describing the COVID-19 coronavirus as a "Chinese virus" in his tweets, it seems that now Hollywood actress and activist Alyssa Milano, a vocal critic of the US head of state, has also got involved in the argument.

Stepping forth to challenge Trump on what seems to be his favorite social media platform, Alyssa openly called him a "racist piece of sh*t" and urged him to stop referring to the pathogen as "Chinese virus".

Her tweet evoked a mixed reaction among the social media crowd, as a number of people claimed that that the definition used by the president was pretty apt.

The virus came from China! You live in a Mickey Mouse world.

It started in China sorry. Sorry

​Some also jokingly discussed a possible different name for the disease - "Kung Flu".

Agree is the “Kung Flu” get it right. We are all Kung Flu fighting.

One of his staff called it The Kung-Flu today.

​A number of people argued that the “racist” bit in Alyssa's tweet was unwarranted.

China is a country. Not a race.

​And yet there were also those who seemed to side with Milano against Trump.

Trump is the incompetence virus, Moronovirus-45.

After we're done with #COVID19, we're going to get the infection removed from the White House.

This week, Trump insisted that he started calling COVID-19 the "Chinese virus" due to the fact that he "didn't appreciate the fact that China was saying that our military gave it to them."

The president appeared to be referring to the statements made by Chinese Foreign Ministry spokesman Zhao Lijian who pointed to congressional testimony by CDC director Robert Redford regarding instances of COVID-19 among the deaths in the United States that were previously attributed to influenza.

"When did patient zero begin in US? How many people are infected?...It might be US army who brought the epidemic to Wuhan. Be transparent!" said Lijian.

Meanwhile, Dr. Mike Ryan, executive director of WHO's emergencies program, argued during a press conference on 18 March that "viruses know no borders and they don’t care about your ethnicity, the color of your skin or how much money you have in the bank".

"So it’s really important we be careful in the language we use lest it lead to the profiling of individuals associated with the virus," he said as quoted by CNBC.