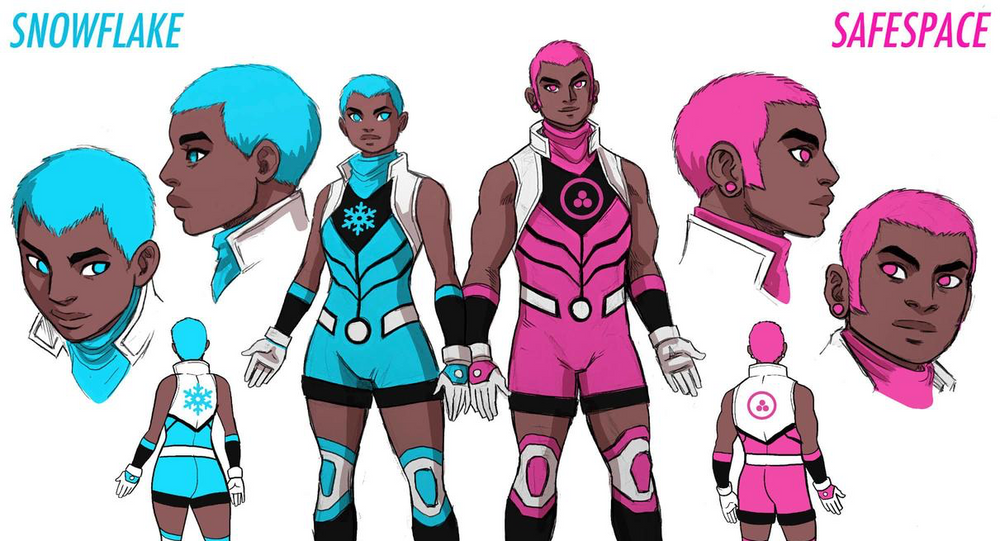 It seems that Thor and Hulk emit too much toxic masculinity for the Marvel Universe so the writers had come up with a new line-up of teenage rebel characters. One of them identifies as neither male nor female.

A bunch of new superheroes have entered the fray to save the Marvel Universe, and the internet is confused, to say the least.

Marvel’s reboot of the New Heroes series has a pretty diverse cast: Screentime, an incel boy patched permanently into the world wide web; Trailblazer, a girl with a magical backpack, and B-Negative, a music-obsessed living vampire.

And then there are two characters that have stunned comic fans – and these people have seen a lot of weird stuff.

They are Snowflake and Safespace (those are real names and not ridicule). Snowflake is apparently a genderfluid whose preferred pronouns are “they/them”. *They* wield crystallised snowlake-shaped shurikens, while *their* twin brother Safespace, described as a “stereotypical jock”, is able to create force fields – but only when he’s protecting somebody else.

The psychic twins are “hyper aware of modern culture and optics”, and use their powers as “a post-ironic meditation on using violence to combat bullying”, Marvel explained.

The new New Warriors are “teens fighting against labels that have been put on them,” said writer Daniel Kibblesmith, who created the line-up together with artist Luciano Vecchio. “It’s this idea that these are terms that get thrown around on the internet that they don’t see as derogatory to take those words and wear them as badges of honour.”

“Every New Warriors comic has always felt like a reflection of the year that it came out. And I don’t think we’re worried about being dated.”

However woke the new superheroes may be, they’ve caused some unflattering chatter on the internet, including in the LGBTQ+ community.

“I thought this was a parody at first,” mused games journalist Ian Miles Cheong.

“Marvel has officially turned into a parody of themselves,” lamented another commenter. “Marvel knows comics are circling the drain, so they figured they might as well go all in.”

LMAO THEY LITERALLY NAMED THEM SNOWFLAKE AND SAFESPACE I THOUGHT IT WAS A SHITTY BOOMER PARODY https://t.co/UuNLsgEAFh

mfs are named SNOWFLAKE and SAFESPACE this is absolutely bait for the “get woke go broke” people because they know that’s the only way this will get publicity you cannot convince me otherwise pic.twitter.com/YhC89wgHPW

As a literal nonbinary person I am cringing inside and out

Why on EARTH would you name Marvel's first non-binary characters 'Snowflake' and 'Safespace'? Not sure if purposeful but this reads like a pisstake. At a glance I genuinely thought this was a CG project. https://t.co/baGY0auKFm

The reaction to the new Marvel characters "Snowflake" and "Safespace" pic.twitter.com/AvYN2tTrSC

heres to snowflake and safespace and their long and illustrious career of appearing in like the first four issues of this event comic, then being relegated to background characters, and then reappearing in 15 years time on a "marvels top ten dumbest characters" listicle

as a black nonbinary creator this is extremely tone deaf and ugly. "Snowflake" "safespace" are you deadass

One cartoonist proposed a pair of satirical cisgender superheroes for Snowflake and Safespace: Privilege and Essentia.

heard two cis dudes at Marvel are introducing a pair of nonbinary heroes named (i shit you not) "Snowflake" and "Safespace". i figured i should do them a solid and design a pair of cisgender superheroes for them as well, since i know how hard up for representation cis folks are pic.twitter.com/q57TbU5ln8

This might not Marvel’s only contribution to much-sought diversity in comics. In January, the company announced it would feature a transgender hero in an upcoming movie.