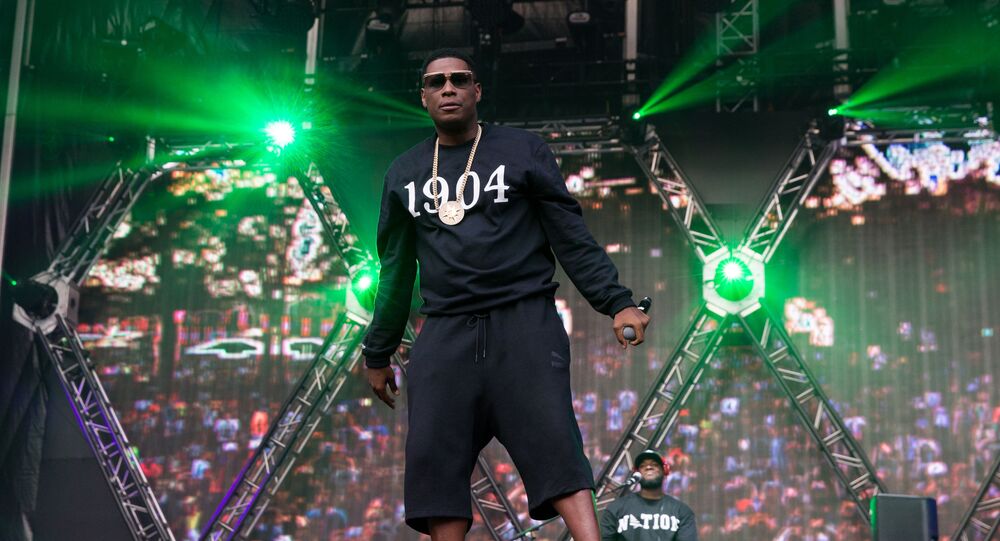 A Jewish radio host clashed with Electronica over the controversial line, which appeared to be a reference to the New Testament’s Book of Revelation.

American rapper Jay Electronica’s has found himself in a controversy following the release of his debut album.

The album, titled ‘A Written Testimony’, focuses heavily on Electronica’s Islamic faith and is filled with mystical allusions.

The track ‘Ghost of Soulja Slim’, a collaboration with Jay Z, opens with an audio snippet of a speech by Louis Farrakhan, the bombastic Nation of Islam leader who has rallied against “Satanic Jews” in the past (Electronica is a member of the Nation of Islam and a friend of Farrakhan’s).

It features the following lyrics: “I bet you a Rothschild I get a bang for my dollar/The synagogue of Satan want me to hang by my collar.”

The first line could be a reference to his past romance with banking heiress Kate Rothschild, although this family is primarily associated with conspiracy theories suggesting that it secretly rules the world.

But Peter Rosenberg, a Jewish radio host who does hip hop podcasts, has taken offence with the “Synagogue of Satan” line.

“Not feeling this bar from Jay Electronica and I know I’m not the only person who felt a way about it,” he tweeted.

“As a Jew it puts me in a bad position. I can ignore the fact that I instantly felt a pang of discomfort and offense and basically sell out my culture or I can be accused of being the ‘Jewish media’ hating on this man. But it’s how I felt. The line offended me.”

Rosenberg’s co-host Ebro tried to point to the fact that ‘Synagoue of Satan” was a Biblical reference, to which Rosenberg replied that it was from the New Testament, which Jews do not acknowledge.

Electronica noticed the tweets and took on an aggressively-defensive tone. He described Rosenberg’s critique as “clout chasing” and reiterated standing on “every single word I said on this album.”

According to Complex, he wrote in a series of since-deleted tweets: “if you have a problem w the term Synagouge of Satan, don’t take it up w me, take it up w the writers of the New Testament. Don’t play w me Peter, i ain’t the one. and you know this. i come in peace and i go in peace. let’s keep it that way.”

The rapper went on to challenge Rosenberg to a public discussion involving scholars of faith, and he apparently invited Electronica on his podcast – that’s where the beef, or at least its public manifestation, has ended so far.

I have a public forum everyday if you ever want to talk -- feel free ...

I am not the only good, supportive, hip hop loving person who was taken aback by some of these bars...happy to discuss it any time ..

​While some people supported Rosenberg in that such rhethoric demonises Jews, a number of hip hop fans flocked to the comments to accuse Rosenberg of what they described as hypocrisy on his side.

How come you never “taken aback” by all the destructive hip hop lines that’s counter-productive to the black community that y’all play on a daily basis up there , all the drug promoting black on black killing n the music never caused u to speak out like this. Hella hypocritical🙄

i listen to rappers talk about selling crack and m*rdering black people all day long bc the media forces it on society. youll be fine

Not in the slightest

Oh brother. Get over it. It's a lyric. I haven't seen you rant about crime or misogyny...