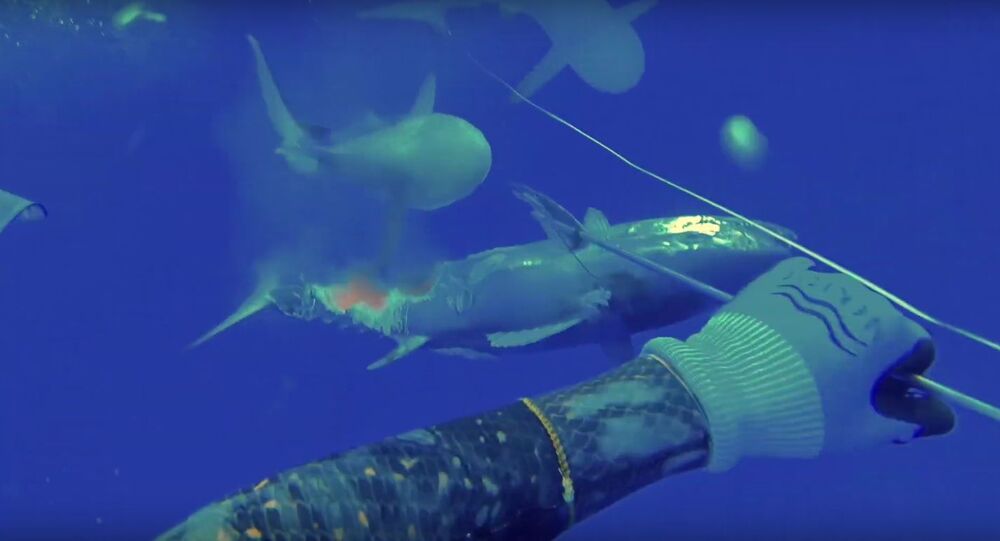 When you're trying to catch big fish you must remember two rules. First - you will have plenty of rival predators and second- make sure you don't end up being the prey.

A fisherman picked a fight with three sharks, that tried to feast on his massive catch. The incident, which sounds more like something out of Ernest Hemingway's The Old Man and the Sea, but with a happy ending occurred last October when Cole Harrison and his two friends decided to go spearfishing for dogtooth tuna near the Cook Islands.

"They're known as the pinnacle of spearfishing because they are so hard to catch. They can't be caught by using a rod. They taste incredible, and they look incredible", the man told the Daily Mirror.

After three unsuccessful attempts, which ended with sharks stealing their catch, Cole and his friends decided to sail to other areas. Just as in the past, the young man managed to pierce a giant tuna with a spear, but when Cole started pulling his catch to the surface, three reef sharks rushed for it. Cole, who works as the captain of a boat and an underwater photographer, entered a tug-of-war with the three hungry sharks.

As he pulled the tuna closer to the surface, the sharks followed. Cole then called his friends, who quickly rushed to the rescue. In the end, the young man managed to bring the fish onto the boat and escape the sharks.

WARNING: The following video contains images that some viewers may find disturbing

"I stayed calm, it's just experience. I've been diving with sharks my whole life, and I've been fishing since I was 10-years-old. I've been butted by them before and have friends who have been bitten by sharks. If I didn't get the boat there, then we would have lost the fish. For sure I was worried about getting bitten, there was a lot of adrenaline", Cole told the Daily Mirror.