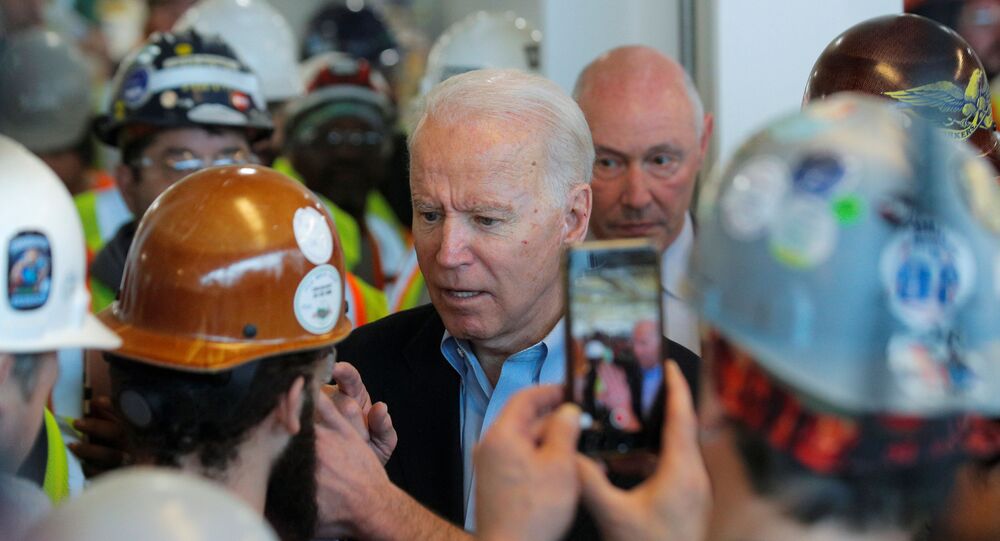 Folks on Twitter were sharply divided Tuesday over a fiery, filmed dispute between Democratic presidential candidate Joe Biden and a prospective voter over the issue of gun regulation. While some found his tough talk endearing, others fretted over the potentially alienating effects of his aggressive, macho posturing.

“You’re full of s**t.” That’s how Biden, a former US vice president and prospective Democratic candidate to challenge US President Donald Trump for his office this November, responded to a pointed question by a Michigan auto plant worker on Tuesday. Six states are holding primary votes today, including the Mitten State.

🚨 HERE is the up close video Biden’s encounter with Union man in Detroit. 🤡🚬

​The bearded, hard hat-wearing man had just asked Biden to explain why the workers in the union shop should vote for him when “a large portion of the union vote are gun enthusiasts and you are actively trying to diminish our Second Amendment right and take away our guns.”

Biden then defends his position, saying he supports the right to own shotguns and hunting rifles but not “machine guns” and “AR-14s,” but not before shushing a female aide who tries to break up the group.

The auto worker presses the question, though, noting that “a viral video … with your voice said that you’re taking the guns” and telling Biden “this is not OK” when the candidate sticks his finger in the man’s face.

“Don’t tell me that. I wanna go outside with you,” Biden tells the man as the argument becomes ever more heated.

It was hardly the first time Biden has gruffly confronted voters challenging him on the campaign trail. In December he called an Iowa voter “a damn liar” who took him to task over the business connections of his son, Hunter Biden, and last month he called a New Hampshire woman a “lying, dog-faced pony soldier” after she asked why he did so poorly in the Iowa caucuses.

Dozens of workers at the plant on Tuesday filmed the factory floor encounter, and it quickly made its way onto social media, where users interpreted the exchange as either very good or very bad for Biden’s election prospects.

Some called attention to the way he shushed a woman and his use of profanity:

Biden's completely lost it. Using profanity. Asking guys to step outside as if to brawl with them. Denying things that are on video. Telling people to SHUSH. It's pitiful.

​Some honed in on what they sensed would be a media double standard, predicting that Biden’s actions would be brushed off by sympathetic reporters, where Biden’s primary Democratic rival, democratic socialist Sen. Bernie Sanders (I-VT), would be scrutinized.

can you imagine what the media‘s response would be if Bernie Sanders threatened to slap an autoworker in the way Joe Biden does in this video? pic.twitter.com/NNIKZ5Wgs6

​Others pointed out his various gaffes, including his mention of a mysterious weapon called an “AR-14:”

AR14? That’s the model equipped with a magazine capacity of 9-1/2 rounds that shoots around corners.

​Another worried about the 77-year-old candidate’s safety, picking fights surrounded by tough union guys like he did:

This is why candidates need @SecretService This could have gotten out of control very easily but I love that Joe didn’t back down surrounded by all these hard hats. @JoeBiden #VoteBlueNoMatterWho https://t.co/913BRU7Pad

​However, some felt the exchange was actually a demonstration of presidential material and his ability to stand toe-to-toe with Trump on the debate stage.

LMFAO Joe Biden is awesome, thanks for sharing this!

I know a lot of folks, especially on the left, aren't going to wanna hear this, but a lot of voters will be more drawn to Biden because of this video. To us, it may look clumsy and combative. To them, it looks strong and assertive. Mark my words. https://t.co/OhgT37Alvs

Good - we need a fighter

​If there’s one thing the US voting population doesn’t seem to be in short supply of, it’s opinions on Biden!