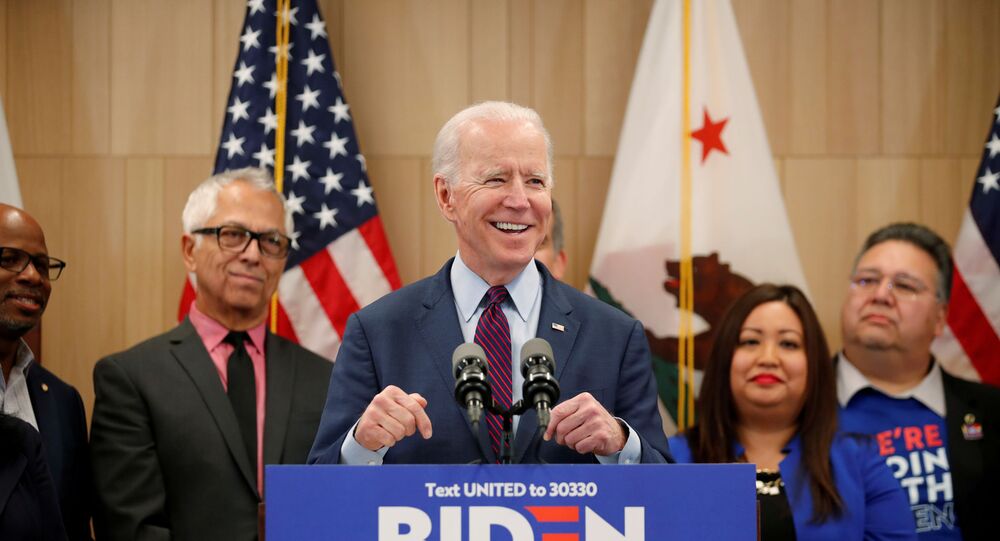 Joe Biden and Bernie Sanders are due to lock horns in the next round of primaries on 10 March, a week after the former US vice president won in 10 of 14 states during voting on Super Tuesday.

Sharing his fundraising update during a call with supporters in Bethesda, Maryland on Friday, former US Vice President and Democratic presidential candidate Joe Biden also lashed out at a hardline group of Bernie Sanders supporters.

"What we can't let happen is let this primary become a negative bloodbath. I know I'm going to get a lot of suggestions on how to respond to what I suspect will be an increasingly negative campaign that the Bernie Brothers will run. But we can’t tear this party apart and re-elect [incumbent Donald] Trump. We have to keep our eyes on the ball, in my view”, he argued.

Biden apparently referred to "Bernie Bros", a colloquial term for Sanders supporters, who have repeatedly been criticised for aggressive tactics on social media platforms, including Twitter.

Netizens have, meanwhile, remained at odds over Biden’s “Bernie Brothers” remarks, with some pointing the finger at the former US vice president.

Nobody’s mad. It’s noticeable that he said “Bernie Brothers” rather than the standard “Bernie Bros” because it indicates that he doesn’t really know anything at all about this supposed phenomenon, and has just been briefed about it by his advisors. That’s all

Joe Biden is corporate garbage who can't remember the name of the President he served with. The only people more excited about "Joementum" than his campaign are the Republicans.

I think Joe Biden just murdered his chance of beating Donald Trump. Some Sanders supporters are willing to vote for the nominee but he is attacking the voters for what? He is seriously thinking that he could beat Trump without Sanders’ supporters?

So all questions or scrutiny about policy will be seen as “Bernie Bros” bullying? How convenient.

Biden is tainted by corporate interests.
Sanders offers a real alternative to bring US into twenty-first century thinking

“I think Joe Biden just murdered his chance of beating Donald Trump”, one user wrote on their Twitter page, in what was echoed by another who pledged that “we will never like Joe Biden”.

Others, however, signalled their support for Biden, admitting that they “love” him and warning that “Sanders should really discipline his most hardline supporters and surrogates who have promoted online bullying and political violence.

What is the problem exactly?

Respect for not following in Hillary’s footsteps at least. She stays bitter and vindictive to this day

I agree with this mentality. There will always be negative people. No need to let yourself be brought down to their level https://t.co/O5OsmrOUY8

Love you Joe! Keep doin it #JoesWay! @BernieSanders IS NOT A DEMOCRAT and I rebuke the fact that he stands on the Democratic Ticket! He needs to stay in His own political lane! #WeKnowANDWantJoe

Last month, Sanders reacted angrily to his hardline supporters attacking Nevada's Culinary Union on Twitter for saying that his "Medicare for All" healthcare plan would strip union members of their existing health care coverage. The Democratic presidential hopeful condemned the Bernie Bros' actions as “unacceptable”.

On 10 March, Sanders will face Biden in the next round of primaries, which will come following the former US vice president’s win in the Super Tuesday voting earlier this week.