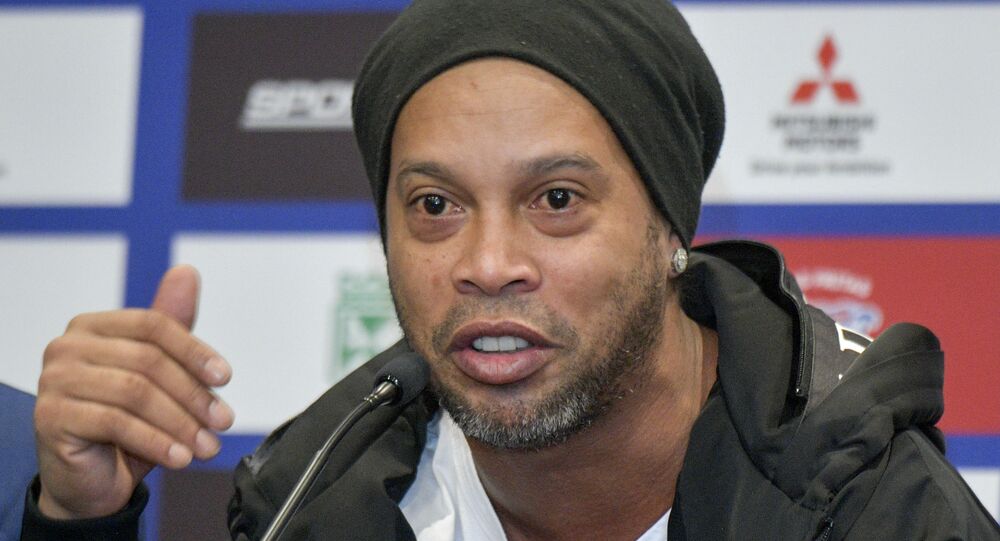 During his career the 39-year-old was twice named FIFA’s Player of the Year and led the Brazilian national team to victories at the 2002 World Cup and Confederations Cup. He also won the Ballon d'Or in 2005.

Football superstar Ronaldinho has been detained by authorities in Paraguay for allegedly using fake passports. The famous Brazilian athlete arrived in the country to promote his book and take part in a charity event. He was detained together with his brother and another man, Wilmondes Sousa Liria.

"I respect his sporting popularity but the law must also be respected. No matter who you are, the law still applies", said Paraguay’s Interior Minister. He noted that Ronaldinho and his brother were not arrested and are under investigation.

The news shocked football fans, who couldn’t fathom why the superstar, which some consider the greatest player of all time would need to purchase a fake passport.

Dude, you’re THE RONALDINHO! WTF would u carry a fake passport?

Why would he do that,he's rich enough to get 100s of them

​Others wondered how the 39-year-old planned to go unnoticed given the fact that he is famous all over the world.

"I'm a world famous footballer. One of the most recognizable people on Earth. Here's an idea, let me just use this fake passport real quick." 🤦🏻‍♂️😂

​Some netizens noted that Ronaldinho is Brazil's Tourism Ambassador and that as a Brazilian citizen Ronaldinho didn’t need a passport to enter Paraguay.

The funny thing is Brazilians don’t even need a passport to enter Paraguay they just need a Brazilian ID card.

Mind you Ronaldinho was appointed by Bolsonaro to be Brazil's tourism ambassador...

​A few social media users were disappointed at the news and said that great athletes can’t control their lives once they hang up their boots.

Don't know why so many footballers loose their head after being washed ashore, like Maradona who started doing drugs.

This guy is going down the gazza route. A legend that has turned into a complete loser. It hurts me so much to see my idols become liabilities.

​Others called on the authorities to release the football star and said they would support Ronaldinho no matter what.

Guilty or not we still love him

They should leave this legend alone

Still others suggested that Paraguayan police officers simply wanted an autograph from the Barcelona and Milan star.

​The 39-year-old and his brother claim they were tricked by Wilmondes Sousa Liria, who was arrested with them. Last year authorities seized his property and confiscated his Brazilian and Spanish passports over unpaid taxes.