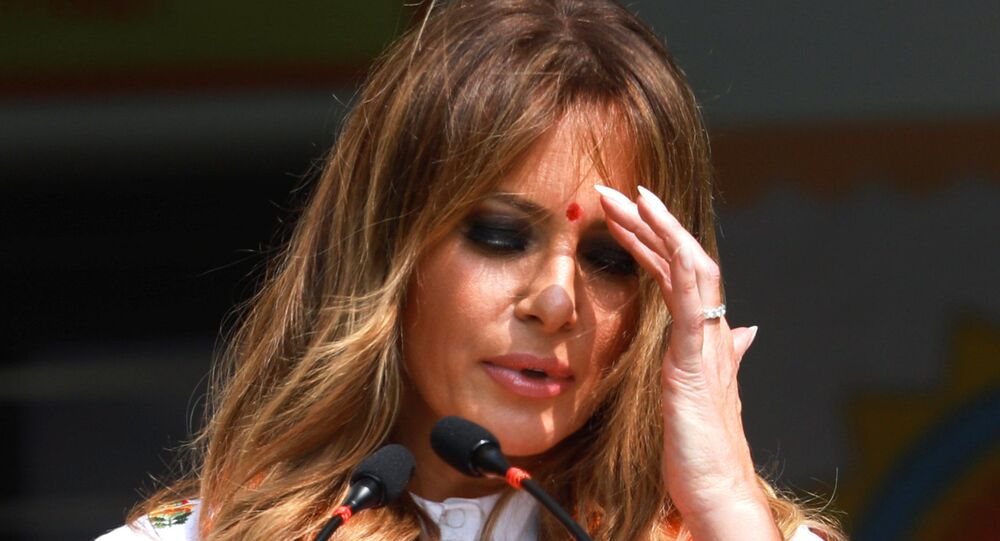 ‘FLOTUS is Not One’: Twitter Humming as Melania Trump Gives Out State Dept. Women of Courage Awards

FLOTUS attended the landmark State Department event for the fourth consecutive year, this time conferring honours upon twelve women recognised for their accomplishments in the US and beyond. The event, however, kicked up a real storm on social networks, with many dwelling on the First Lady’s own highs and lows.

In comments made at the International Women of Courage Awards hosted by the State Department in Washington, First Lady Melania stressed she is “proud of what this country continues to do for women".

“I'm honoured to represent a nation that not only recognises women around the world who are making a difference internationally, but empowers and supports them in their endeavours so they can affect positive change for others", FLOTUS remarked.

Speaking at the annual event for the fourth consecutive time, she noted that throughout history, “individuals who make the greatest impact and create the most change are all remembered for their acts of courage".

The “only all-female award” as it is formally described globally recognisees women who showcased “exceptional courage and leadership", with the total number of Wednesday’s honourees reaching 12.

"These women represent the strength of the female spirit", Trump said while distributing the awards together with Secretary of State Mike Pompeo. The honourees, FLOTUS stated, “have pushed through gender-based stereotypes to serve the greater good", while also lauding women in the US at large:

The award has spawned divisive comments online. While many touted the group of honourees, along with those that conferred the award, some added a fly into the ointment. Critics, naturally, brought up her being married to “vile bully” Donald Trump, suggesting she only “pretends to care about online bullying":

Did you feel awful being around women of courage, given that your whole platform is basically a slogan, a logo, and a few promo pieces from Kinkos?

Especially being married to a vile bully while you pretend to care about online bullying.

How does one with little or no courage attend an awards ceremony for women of courage without wearing a bag over their head!

If Melania wasn’t Melania...she would deserve a Women of Courage Award for being married to the #asshat known as Trump. But she is Melania, with chain migration parents, and a hunger for $$ and fame that surpasses any common sense.

You don’t stand for us or benefit us, and your lack of integrity and courage hurts the women and children you pretend to “care about”.
Go “BeBest” at your gold-plated palace in Florida, you grifter.

International Women of Courage Awards? What are you even doing there? You don't have one ounce of courage to stand up to the bully you're married to..... but yeah, be best.

Long-busted accusations against Trump also re-surfaced, along with critics’ recurrent rhetoric about separated families on the border:

How about those other “women of courage”...the ones who’ve accused Dirty Donald of sexually harassing and abusing them? #Trump #Melania

There are lots of great women who have taken care of their families, our country. Flotus is not one. Many mothers separated from their children at the border try to have the courage to carry on. But flotus really doesn’t care, do u?

“Donald Trump doesn't like women of courage, I think he fears them", one remarked.

A great many wholeheartedly shared the joy of the nominees, touting their accomplishments and the ceremony itself:

@FLOTUS and @SecPompeo and our @StateDept ( that we are starting to trust and❤️again! )
Thank you for the pics of the International Women of Courage Awards ceremony #IWOC2020 . Beautiful accomplished women, lovely dresses and much joy. So great!

FYI Amaya Coppens has received the International women of courage award, and was handed to her by @FLOTUS and @SecPompeo. Nicaragua is celebrating the US and its presidency right now. It pains me to see how only the right wing of the US has acknowledged the fight against the

I heartfully congratulate our brave role model @Zarifa_Ghafari for receiving the Women of Courage award by @FLOTUS & @SecPompeo. Lets not forget that Afghan women are resilient despite the suffering that come with war & conflict, they have come far and will continue to do so.🇦🇫 https://t.co/RP40EljVcd