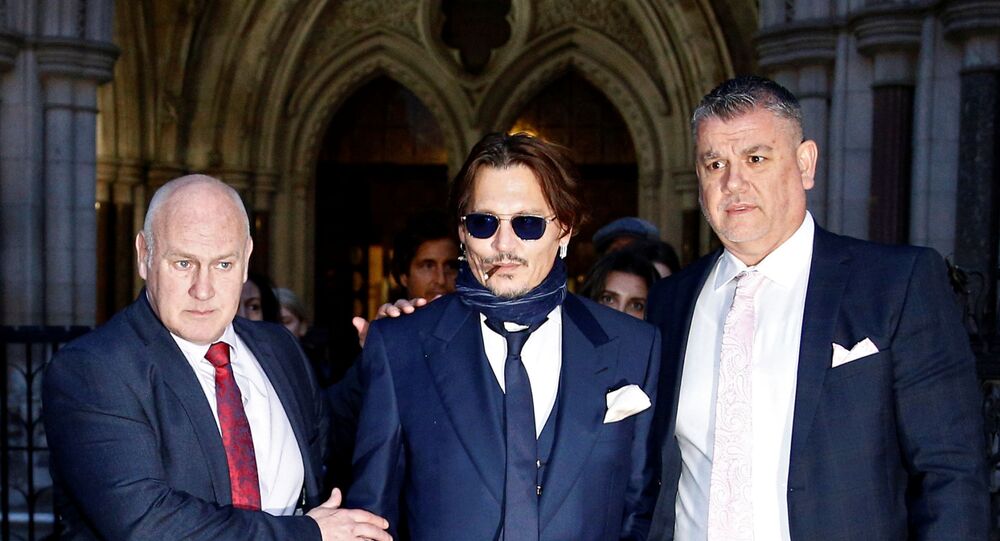 The happy couple tied the knot in February of 2015, but 15 months later Heard filed for divorce citing irreconcilable differences, accusing Depp of physical assault, a claim he denies. The 56-year-old filed a $50 million defamation lawsuit against his ex, saying she is not a victim of domestic abuse, but a perpetrator.

Hollywood actor Johnny Depp purportedly proposed to drown, burn, and f**k the corpse of his ex-wife Amber Heard in a text message to his friend, British actor Paul Bettany. "Let’s burn Amber. Let’s drown her before we burn her!!! I will f**k her burnt corpse afterwards to make sure she’s dead", the star of the Pirates of the Caribbean allegedly wrote to his pal in 2013 when Depp and Heard were dating.

The text message was read aloud during a preliminary hearing of London’s High Court on Wednesday in the actor’s libel case against The Sun. The 70,000 texts to and from the actor were accidentally shared by Depp’s previous lawyer with the newspaper's legal team.

Depp sued the publishers of The Sun and the newspaper’s executive director Dan Wooton, over an article that claimed the actor was abusive to his ex-wife Amber Heard. The actress herself accused Depp of physically assaulting her during their rocky relationship.

At a Wednesday hearing against The Sun, Depp’s barrister David Sherborne said there is no evidence that would support Amber Heard’s claims the actor assaulted her. "One person, one side, is lying, and one is not. Obviously, we say that it is Ms Heard [who is lying], Mr Depp is 100% clear about that", the star's barrister said.

In another text read during the court hearing Depp allegedly told his friend Paul Bettany about his desire to stop drinking following a night of partying:

"I’m gonna properly stop the booze thing darling. Drank all night before I picked Amber up to fly to LA this past Sunday . . . Ugly, mate . . . no food for days . . . powders . . . half a bottle of whiskey, a thousand Red Bull and vodkas, pills, two bottles of champers on plane and what do you get . . . an angry aggro Injun in a f***in blackout screaming obscenities and insulting any f*** who got near. I’m done. I am admittedly too f***ed in the head to spray my rage at the one I love . . . for little reasons, as well I’m too old to be that guy — but pills are fine.!!!"

Adam Wolanski, representing The Sun, said the text refers to an altercation with Amber Heard that reportedly occurred on a plane. During the fight Depp purportedly screamed obscenities, hit and kicked Heard, claimed Wolanski. “It is claimed that he hit her so hard that blood from her lip ended up on the wall”, he said.

Depp has categorically denied allegations he was abusive to Heard and accused his ex of fabricating evidence against him by painting bruises. The star of the Pirates of the Caribbean franchise filed a $50 million defamation suit against Heard. The actor claims Heard is herself an aggressor. Earlier this month, the Daily Mail published a leaked audio recording from an informal therapy session Depp and Heard attended, where the actress admits she did "start a physical fight" with Depp.