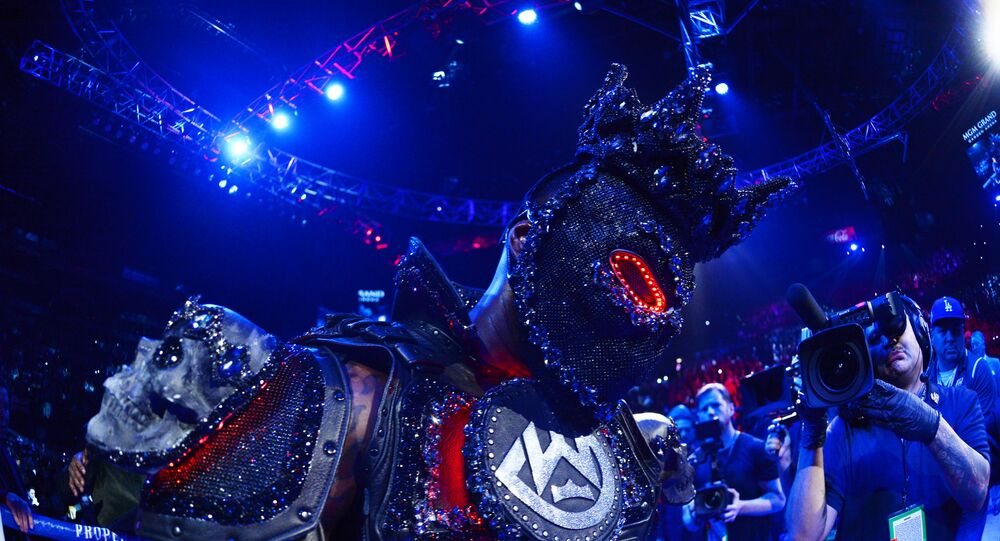 Deontay Wilder had won 42 fights - 41 by knockout - before losing his WBC title to Britain’s Tyson Fury on Saturday night. On the night said he had “no excuses” but now he has changed his mind.

American boxer Deontay Wilder is being mocked on Twitter and Instagram after he blamed his loss against Tyson Fury on the weight of his bizarre ringwalk costume.

Wilder, 34, said he ordered the costume as a tribute to Black History Month - which was February 2020 in the US - but said he did not realise how heavy it was until the night of the fight.

Step One: Tell the ringside interviews that there are no excuses, the better man won on the night.

Step Two: Make up every excuse under the sun in the days that follow. The more pathetic the better. #FuryWilder3 pic.twitter.com/F2dtDfiqEH

​Rather than let the fans and the broadcasters down he chose to wear the 40-pound armoured cape and headgear into the ring but he said he was exhausted even before he climbed into the ring.

Wilder said he simply ran out of energy before the fight was stopped in the seventh round.

​Wilder - who was knocked to the floor in the third round and was bleeding from the ear - told Yahoo: “Fury didn't hurt me at all, but the simple fact is that my uniform was way too heavy for me."

He said: “I didn't have no legs from the beginning of the fight - in the third round, my legs were just shot all the way through. I was only able to put it on (for the first time) the night before but I didn't think it was going to be that heavy. I wanted it to be good and I guess I put that before anything.”

Twitter users and boxing fans have not been slow to tell the Alabama native what they think of the excuse he has given for losing his first fight.

​Wilder said he was angry with trainer Mark Breland - himself a former world champion boxer - who threw the towel in, and with referee Kenny Bayless, who appeared to congratulate Fury on his performance.

But Wilder says he will be back and has indicated he is going to trigger the rematch clause within 30 days, setting in train a third fight in the trilogy.

I never thought I'd hear a worse excuse for losing a fight as David Hayes ridiculous 'little toe' effort. Deontay Wilder blaming his ring entrance costume for his defeat against Fury has changed that. Absolutely pathetic. Just show some humility ffs.

​The first fight ended in a controversial draw. Most boxing afficionados thought Fury won the Los Angeles bout but the judges scored it a draw after Wilder knocked the Gypsy King down in the last round.

Wilder said he would go to Africa next month for a holiday but would go back in the gym and start training for Fury-Wilder 3 when he returns.

Wilder's fiancee, model Telli Swift posted a message on Instagram in which she said: "To me and to so many that know and love you, you’re still and forever will be the champ! You’re the people’s champ and we all know what you do for our culture."

Does Deontay Wilders heavy ring walk outfit beat David Hayes big toe as the best excuse in Boxing ever? They’re both up there with “the dog ate my homework”. What’s your best excuse? #boxingexcuses

​By triggering the rematch clause Wilder will delay a unification fight with Britain’s Anthony Joshua, who is expected to sign up for a defence of his IBF belt against Bulgaria’s Kubrat Pulev in the mean time.

Deontay, you showed us what Strength, Passion, and Courage looks like. You showed the world what it takes to Be A Champion. Most people have no idea just how hard you train, the blood, sweat, and tears you put into this sport for other people’s entertainment. To me and to so many that know and love you, you’re still and forever will be the champ! You’re the people’s champ and we all know what you do for our culture. One moment in time does not define your legacy, your legacy is created throughout time and we will continue to do just that. A bump in the road doesn’t stop you from reaching your desired destination! Deontay, you are and will always be a King with the tenacious heart of a warrior who has elevated the Heavyweight division back to its glory days in the US, you’ve never backed down and never will from any opponent and I am confident you will fulfill all of your dreams! And the journey continues with the same end goal, “One face one name one champ” ! I love you, the kids love you, and you are loved by so many. Continue to give god the glory so we can get back our belt! @bronzebomber #WilderFury3 here we come!! #thesagacontinues #stillourchamp #bombzquad