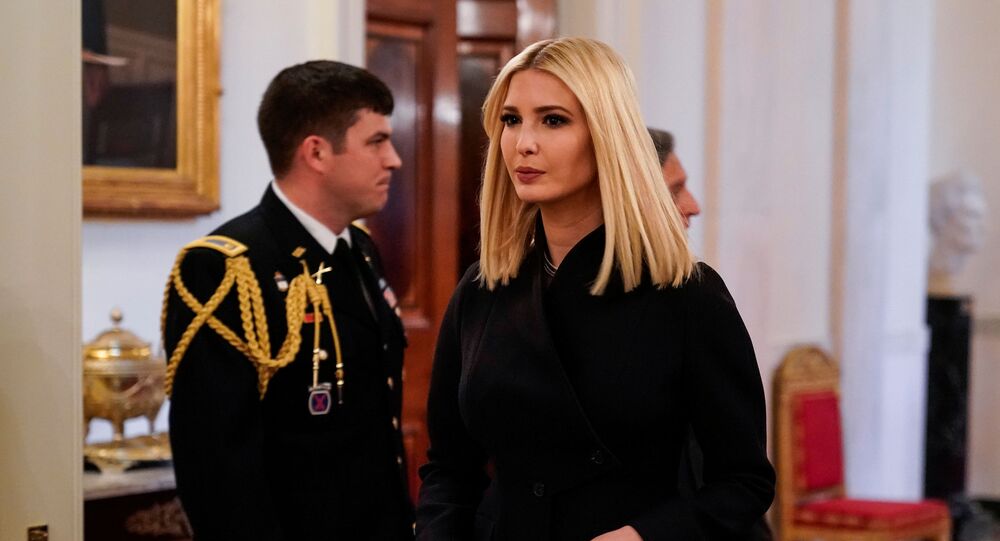 During her visit, the 38-year-old, who is a special adviser to her father President Donald Trump, met with Crown Prince, Sheikh Mohammed bin Zayed Al Nahyan.

Social media users were left enraged after Ivanka Trump posted photos of herself wearing a hijab during her visit to the United Arab Emirates. The 38-year-old participated in the Global Women’s Forum in Dubai as part of the campaign established by President Donald Trump, which aims to economically empower women across the world.

​Ivanka posted several photos on Twitter, which showed her touring the Sheikh Zayed mosque in UAE’s capital Abu Dhabi in a hijab and it seems people on the internet didn’t like her choice of clothing one bit.

​Some users believed that the president’s daughter should devote more time helping her female compatriots instead of promoting empowerment in other countries.

How sad Ivanka wears the hijab and gives up her freedom to kiss thier a$$, she is a Globalist as I see it. I don't trust her & her evil husband. They will be the fall of America as we know it Globali$t sucks, she should be concerned only American Women First. https://t.co/4l7GbWzLhP

Princess Ivanka should keep her feet on American ground to fight for the rights of American women/girls. Instead she's spending taxpayer money to traipse around the world pretending she's important. She's NOT an elected official and can't legally do anything. Vanky is a FRAUD!

​Others found it hypocritical that Ivanka, who’s been promoting gender equality and women’s rights, was dressed in a hijab.

When you travel the world promoting gender equality--but you and the other chicks cover your head and remove your shoes-- while the men... well... https://t.co/B7Tzht1srf

Shame on you Ivanka!! One day you’ll be ruled by men who’ll force you to wear the hijab!! Have empathy for those women who are flogged & jailed in the Middle East. You should lead with your head held high for womens’ rights & freedom!!

​And some users found that the president’s adviser did nothing wrong and her choice of clothing is a gesture of respect for Muslim culture.

Ivanka is just respecting the holy place which is outside her country. She is not hijab advocate. If you want to be taken seriously, you have to be little considerate about people's feeling and situation than being an extremist (about your views), it puts you in the same bucket.

I have to disagree with this one.
In a Church you take off your Hat,
in a Synagogue you have to wear kippa
and in a Mosque you have to cover your hair, not even fully.
It's just a gesture of Respect.

​During her visit to the UAE Ivanka Trump met and spoke with female ministers and entrepreneurs. In her post on Twitter, she said that the Women’s Global Development and Prosperity initiative established by President Trump in 2019 has already impacted 12 million women across the world. She stressed that major legal reforms have been made in the Middle East to promote gender equality.