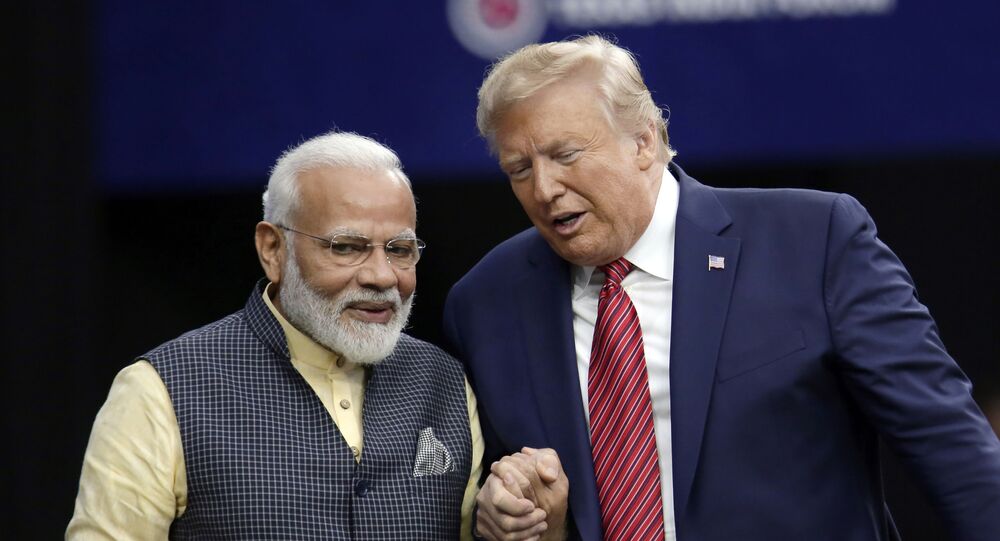 New Delhi (Sputnik): The excitement about Donald Trump's visit to India, set for 24-25 February, seems high on both ends: while India is building a wall along the route from the Ahmedabad airport to hide the slums from view in Modi’s home state Gujarat ahead of POTUS' trip, Trump is boasting about the closeness with the Indian PM on Twitter.

US President Donald Trump, known for his unfiltered tweets, expressed excitement on Saturday about his visit to India in a way that raised eyebrows online.

Expressing 'great honour', he has once again referred to an alleged conversation with Facebook CEO Mark Zuckerberg, who, according to POTUS, told Trump he was Number one on Facebook.

And now it appears that the person who has nearly caught up with him is none other than Indian Prime Minister Narendra Modi, prompting Trump to refer to the prime minister as 'Number 2'.

Great honor, I think? Mark Zuckerberg recently stated that “Donald J. Trump is Number 1 on Facebook. Number 2 is Prime Minister Modi of India.” Actually, I am going to India in two weeks. Looking forward to it!

To make matters worse, the claim doesn't seem to have any factual basis to lend it fibre, as neither Trump nor Modi have the most followers or the most likes on the platform.

Netizens were quick to swoop in and cry foul, with many pointing out a second meaning of "Number two".

No, no, you’re definitely number two.

​Many others, however, were quick to throw their support behind Trump:

Number 1 for American Patriots too!

INCREDIBLE!! You deserve to be #1 Mr. President!!

Ahead of Trump’s visit, among many preparations, a 6-7 feet high wall is reportedly being erected to cover the slum area on an estimated 600-metre stretch in Modi’s home state Gujarat.

Trump is visiting India for the first time after becoming US President in November 2016. Both countries are likely to hold discussions on a range of issues involving sectors such as trade and defence as well as regional and international security.