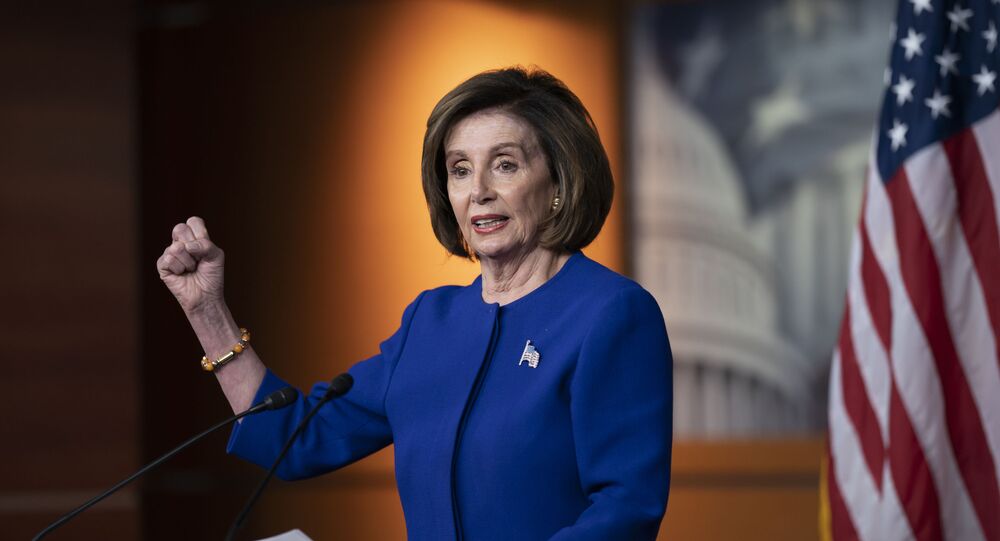 The US president also reportedly labelled Pelosi a “person that started an impeachment and lost“, adding that she “goes down as a loser, which she is“.

Having emerged from his impeachment trial acquitted of all charges brought against him, US President Trump recently delivered some rather unflattering remarks about the behavior of his accusers.

During his recent interview with Geraldo Rivera, Trump argued that Democratic House Speaker Nancy Pelosi used her "impeachment for life" phrase "sadistically", according to Fox News.

"If you watch the way she said that, with the hatred and the venom coming out of her ears, you just take a look at that," he said, adding that his wife, who was present there, described Pelosi's statement as "horrible".

Trump made this claim about Pelosi saying he's impeached for life: "If you watch the way she said that with the hatred and the venom coming out of her ears -- you just take a look at the hatred...my wife was sitting there and watched it and she said, 'Oh my. That was horrible.'"

​The president also described Pelosi as a "person that started an impeachment and lost", adding that she "goes down as a loser, which she is".

Quite a few social media users, however, did not seem to share Trump's point of view, mocking the US president instead.

Does he not know how ears work?

Donald Trump: "..my wife was sitting there and watched it and she said, 'Oh my. That was horrible.'"

I find this hard to believe.

Melania was sitting close to her husband? And they talked to each other? Can't be. pic.twitter.com/aP4kEl0j9a

Um...he is impeached for life. It's not hateful to say so. It's a matter of fact.

Trump doesn't know that he's a narcissistic psychopath, a pathological liar, a conman, and a criminal. So I'm sure it must really befuddle him that he's hated so much. He's always wondering what's up with these weird people who refuse to see and appreciate his awesome greatness.

Some also bashed Trump for the way he referred to his wife.

​The impeachment process against Donald Trump was launched in September 2019, with House Democrats accusing him of blackmailing Ukraine with the withdrawal of military aid unless the Ukrainian president started a criminal probe into one of Trump's 2020 election rivals, Joe Biden.

However, even though Trump got impeached on charges of obstruction of justice and abuse of power, the Senate acquitted him on both counts.