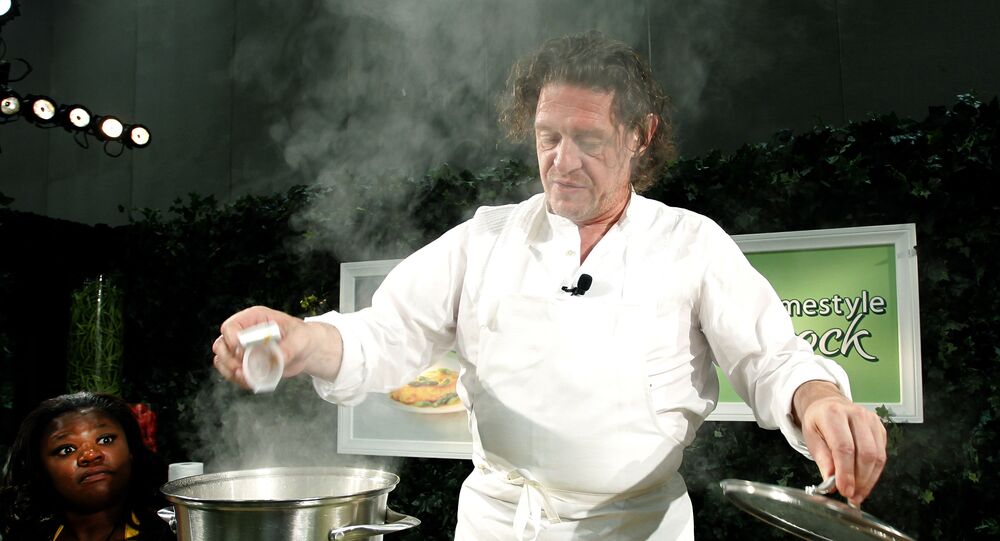 Had I Been the PM of India, I Would've Given Opportunity to People: British Chef Marco Pierre White

New Delhi (Sputnik):  Celebrated British Chef Marco Pierre White, whose life journey will be shown on big screen with Hollywood actor Russell Crowe playing his onscreen role in yet to be titled film, is currently on his third visit to India as the part of the fifth season of country’s most premium gourmet festival World On a Plate (Woap).

Organised by Gold Rush company, the gourmet festival World On a Plate (Woap) is set to host celebrated chef Marco Pierre White along with India’s most popular celebrity chef, Ranveer Singh, at a two-day event in Delhi's DLF Avenue starting 15 February. The British chef has opined that in order to eradicate hunger in India, there need to be more opportunities.

Marco Pierre White was smartly carrying a badge on his coat that reads: “I pledge to fight hunger” during his official press conference in India as a part of his third visit to the country. Asked  about how he feels the country, which has reportedly been ranked 103rd among 119 countries on the Global Hunger Index in 2018, he told Sputnik, “I think firstly you have to accept the complication of the problem and when you understand the size of it, then you can start finding the solution.”

“When I arrived today (On Friday), I saw the families living under bridges and I felt really guilty for the privileges that I have been given in my life and I think everybody in the world should expose themselves to it, because the one thing it does it immediately is that it instils in you the value and appreciation of what you have been given,” added the “Hell’s Kitchen” presenter, who was the youngest and the first British chef to be awarded three Michelin stars, at the age of 33.

Recalling the tough times he himself had lived through when he was young, he said that he “understands being poor because I was poor but there were opportunities to help me escape the world that was born into, I think it’s about creating opportunities as well as elevating themselves within that world”.

He feels that the key is to create opportunities.

“I think you have to create an opportunity for people as it will build their self-esteem. If I have a chain of restaurants here, I will find people to give opportunities and to train them. It’s like you give a man fish, you are feeding him for a day and if you teach him how to fish, you are feeding him for life. The key to eradicating hunger is an opportunity where people can earn that money, learn a skill and build their self-esteem and confidence,” he said.

“Had I been the Prime Minister of India, I would have given the opportunity first,” said Marco Pierre White, who is also known as the Godfather of modern cooking and has mentored chefs like Gordon Ramsay, Shannon Bennet, Curtis Stone and many more.

His Maiden appearance in Delhi will also be about sharing his persona, life experiences, kitchen stories and tales of his time working with other celebrity chefs as a host of WoaP.

During the event, one would experience the exceptional restaurant's pop-ups by the city’s sixteen top restaurants. The two-day festival will also witness the second edition of the DLF Food Excellence Awards on 15 February; 16 February will see Marco Pierre White participating in a live tasting session on the main stage at the Philips Taste Theatre with Brar.

Talking about his love for India, the celebrated British chef, who previously visited Mumbai and Bengaluru, said: “When I  first arrived in Mumbai, the visual and emotional impact was enormous. It really penetrated in me.  I think India is without a question the most magical country in the world and I am not saying this because I am here. I feel more conformable in India than I do in my own country. The humility in India is extraordinary and it humbles me.”

“The jewel in the Indian crown is people, because what makes the country special is people. The generosity and spirit in India, the humility and the kindness, they don’t try to impress you, they look after you and its a different mental approach, which gives great insight into their culture,” he added.

Woap is a global idea, created to bring Indian culinary to the forefront. and exchange ideas with top chefs travelling from around the world to India. Some get ideas to take home and others set about setting up their own restaurants.