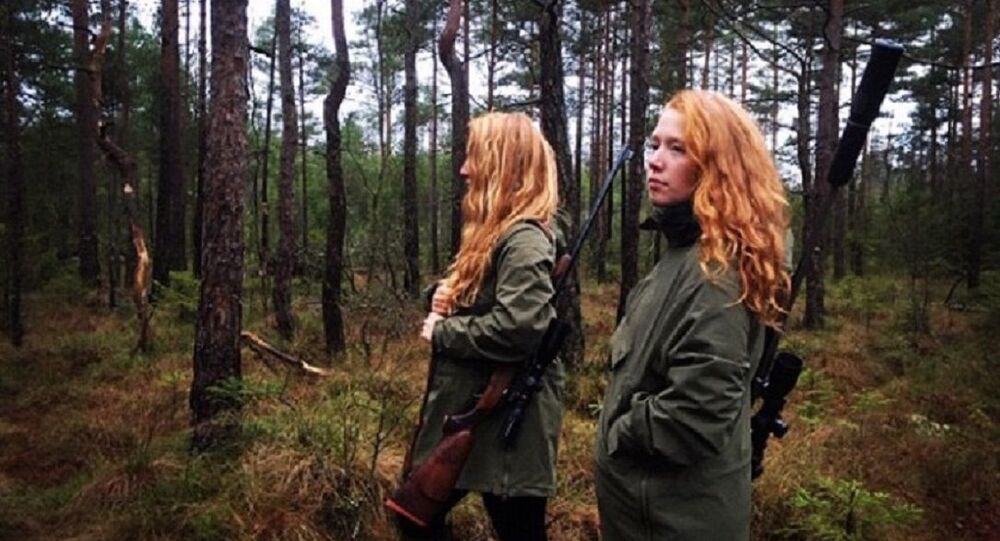 Unperturbed by the hate messages they receive, the red-haired sisters who in their early days took part in the Danish edition of X-factor and performed as a band called Paint it Red, intend to continue “filling their freezer with high-quality game meat”.

Rikke and Trine Jacobsen, 26-year-old twin sisters from Denmark, who have been hunting with their father since the age of ten, have received online abuse and even death threats from animal rights activists over the gory photographs of game posted on their Instagram.

After years of following their father, Borup natives Rikke and Trine, a vet nurse and physiotherapist, have received their own hunting licenses and started an Instagram channel called Hunt & Hike. The assortment on their page includes a plethora of trophies, ranging from ducks and pheasants to deer and even boars. Some of the pictures posted include an assortment of guns, bloodied knives after a hunt, skinned carcasses and the sisters themselves posing with their kills.

This time of year my Dad, Twinsis and I travel to the scottish highlands. 🏴󠁧󠁢󠁳󠁣󠁴󠁿Unfortunatly this year I am currently working as a veterinary nurse in Lapland, but hopefully in october we get the chance to hunt these rewarding animals in beautiful scottish surroundings again. Tonight I look back on this fantastic memorable Scottish Lad. 🤍 #højlandshjort#scotland#stag#hunting#huntingseason#hunter#huntressview#highlands#highlanders#redheadedwoman#seelandhunting#seeland_official#beautiful#huntinglife#wildlife#worldtraveler#wilderness#wildlifeonearth#intotheunknown#intothewild#huntgram#huntresslife#memorable#myscottishlad

The photographs and the hunting stories posted frequently end up in the sisters receiving online abuse.

“A guy said to me once, 'you may also suffer the same fate as the poor animals you are killing'. Another guy wrote me a message once that I was a 'killer sl*t'”, Rikke told The Sun.

Unperturbed by the hate messages, the sisters intend to continue “filling their freezer with high-quality game meat”.

“There is nothing like sitting down with a steak that you procured yourself by hunting”, Trine said, describing hunting as “the most self-sustainable you can get”. “Hunting gives you the freshest, healthiest and most ethically killed meat. That’s why we hunt”, she added.

The Jacobsens described hunting and cooking meat they have hunted as a “gratifying experience”, adding that it adds to self-sufficiency and strengthens their friendship thorough “unforgettable experiences”.

“The best thing with hunting or all kinds of adventures is to share it with the ones you love. Rikke and I are so close, and to have this together has brought us even closer”, Trine said.

“The thought that we have this passion together is what I love, and it has brought us closer together with our father”, Rikke added.

By Rikke's own admission, despite the smiling photographs, it's not uncommon for the hunters to feel remorse over their kills, because they they don't hate, but respect them.

“We respect all wildlife and animals, even though we go hunting. We do not harvest wildlife, we kill and eat them, but we respect it. Without wildlife in our world, we would have nothing. So every time we kill, we say ‘thank you’ for the opportunity”, Rikke told The Mirror.

In their teens, the Jacobsen twins rose to national fame by participating in the Danish X-Factor and forming a duo called Paint it Red.