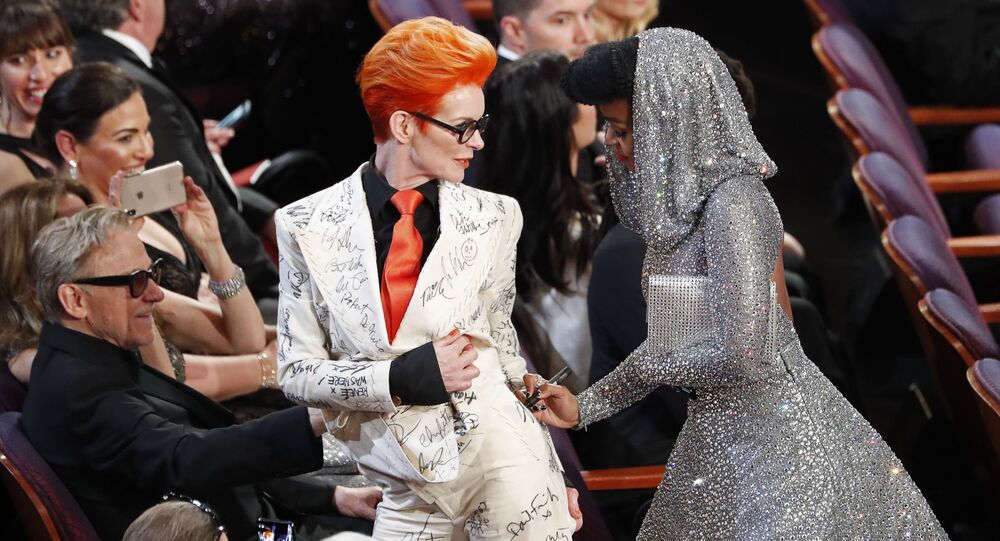 From Brothel Curtains to Darth Vader Cosplay: Most Meme-Inspiring Guests at Oscars

Many film fans followed last night’s 92nd Oscar Awards Ceremony to see both the surprises and shattered dreams of moviemakers. But it would not be an exaggeration to say that many watched the fest to see the famed Hollywood glam, bling, and striking outfits. The fashion choices of guests at the event also provided netizens with plenty to scoff at.

While some lamented that their favourite actors and actresses had lost the chance to snatch this year’s Oscars or lambasted Brad Pitt for his joke about John Bolton in his acceptance speech, others had fun roasting celebrities’ outfits on social media. Even those guests who left the ceremony with awards and praise could not avoid the Twitter fashion police.

This includes Laura Dern, whose part in Marriage Story was singled out for the Best Supporting Actress award. The bejewelled black bodice on her soft pink dress stood before the social media fashion court and was found guilty of resembling “brothel curtains”.

Laura Dern in a dress made from brothel curtains a la Gone With the Wind. #Oscars pic.twitter.com/XvSWkIXVkc

Love Laura Dern but why does her dress look like the yokes rich ppl use to separate their curtains #Oscars pic.twitter.com/JtJDY88Ycq

​Lily Aldridge’s white gown also led some to think of DIY attire, using whatever was at hand.

My mates commentary on #Oscars is 👌🏼👏🏼 ‘First up we have lily adlridge who is wearing her menstrual cup outside of her dress’ pic.twitter.com/7a5PPSJUao

​Probably more unwanted allusions than any other guest’s garments were provoked by Kristen Wiig’s red gown. It made some think of lasagne, lobsters, or car-washing brushes.

​Natalie Portman and her statement cape with embroidered female directors’ names in a year when no woman was nominated for Best Director had a different effect. It gave some a medieval feel and prompted references to Princess Padma’s unfortunate husband’s attire in The Phantom Menace.

LOVE how Natalie Portman 's dress has the names of the female directors that were NOT nominated at this year's #Oscars! WE STAN!!! pic.twitter.com/LOWuan1UW1

The first thing that came to mind with Sandra Oh’s dress was: #Oscars pic.twitter.com/EEIsEUL1mg

​The men did not fail the scoffers either, as – strangely enough – Elton John showed up in what some dubbed a Joker costume, although he won a statuette for I'm Gonna Love Me Again in Rocketman.

Weird that Elton John won an Oscar for Rocketman but is dressed like Joker pic.twitter.com/iemphfXtqG

​But, probably, Janelle Monae, who performed at the Oscars, took the award for having the most debated dress at the ceremony. It was given many names, from the heroic “Electric Lady” and Anime Space Princess to the mocking Hershey’s Kiss. It looked like dipping sparkles and prompted some to suggest: give her a sword.

​Some immediately spotted the homage to Prince at the Oscars in 1985.

Prince at the Oscars in 1985. Janelle Monáe at the 2020 Oscars. I suspect this was an intentional homage and I AM ALL ABOUT IT #Prince #JanelleMonae #Oscars pic.twitter.com/yytS7P0KVL

#Oscars
Janelle Monae’s outfit reminds of Prince’s back in 1985. pic.twitter.com/R9n3i9LJpq

​Her stage costume with a flower cape also stirred allusions, but to a more recent movie – the horror flick Midsommar.

Janelle Monáe reppin Midsommar. I didn't think I could love her any more. This is so dope. pic.twitter.com/1Qw7iSxsDK

​The 92nd Academy Awards Ceremony was held last night at the Dolby Theatre in Los Angeles, gathering the crème de la crème of the film industry. The most surprising triumph turned out to be the Korean movie Parasite, which landed four awards, including Best Director, Best Original Screenplay, and Best International Feature.

© REUTERS / LUCY NICHOLSON
Stealing Oscar for J-Lo? Backstage Fuss at Academy Awards Turns Into Meme
But the event this year did not go by without a scandal, either, as some criticised the nomination list for a lack of diversity, as there were no females nominated for Best Director and there was a perceived lack of black nominees, according to some.

For a second year in a row, the ceremony did not have a host, following a 2019 scandal when then-confirmed host Kevin Hart found himself in hot water over jokes that he made about the LGBT community in the past and was forced to step down.

What Do Ex-Obama Staffers Have to Do With Brad Pitt Going Political at Oscars?