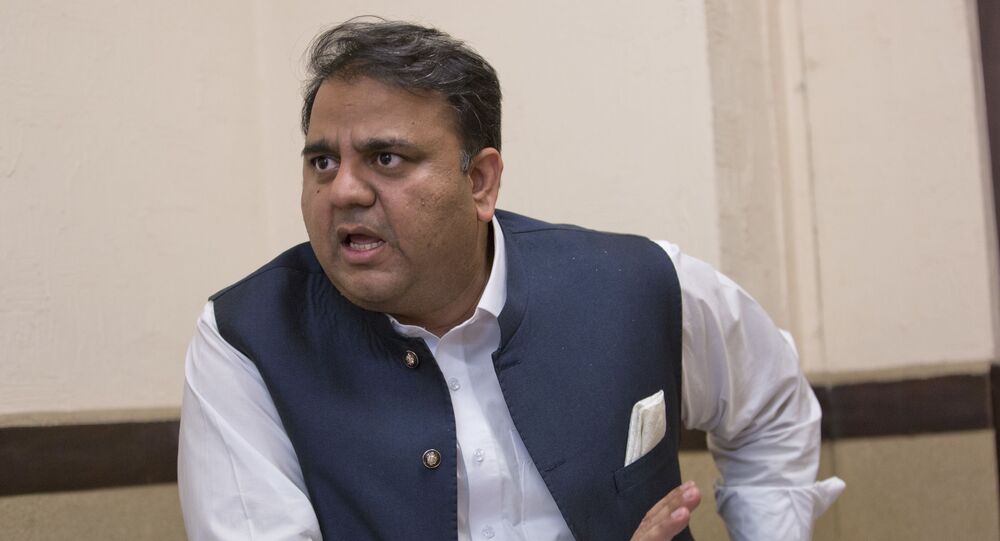 New Delhi (Sputnik): Pakistan’s Science and Technology Minister Chaudhry Fawad Hussain often becomes the target of trolls either for misspelling words or factual errors and is often lampooned by netizens.

Not stranger to spelling gaffes, Pakistani Science and Technology Minister Chaudhry Fawad Hussain has landed himself in a ‘thong’ controversy.

He has called his country a thong for India’s ruling Bharatiya Janata Party and its parental organisation Rashtriya Swayamsewak Sangh (RSS).

Hussain was replying to a tweet, wishing a healthy recovery to former Pakistan Army spokesman Asif Ghafoor, who was injured in an accident on Wednesday night.

​A Twitter user had remarked there are only three people from Pakistan including Ghafoor, Hussain and Prime Minister Imran Khan, who remain in discussions in India and they should take care of themselves.

In a failed attempt to reply to that Twitter user, the minister tried to state that it’s not just three of them but that the whole of Pakistan is a "thing" which the BJP and the RSS like attacking.  But the minister actually ended up with an awkward spelling blunder using "thong" for the word "thing".

Soon after, when the tweet went viral on social media, the minister deleted it. But the screenshot of the tweet made its way on social media and triggered an onslaught of memes, trolling him for his blooper.

Looks like Fawad got a better experience with thong would have got so many whips as well naked.

Pakistan is a Thong :) pic.twitter.com/EepqHYDbTj

​This is not the first time that Hussain has landed himself in an awkward situation: as once he misspelled “very” as “bery”.

Thank you indeed was a pleasure to meet and looking forward for a bery close cooperation between Pakistan and Denmark specially in biotechnology and precision agriculture https://t.co/9Z50ddoKCq

​The minister has also been told to brush up his general knowledge as he once claimed that the world's biggest telescope Hubble was sent into space by Pakistan's space agency, SUPARCO (Space and Upper Atmosphere Research Commission).