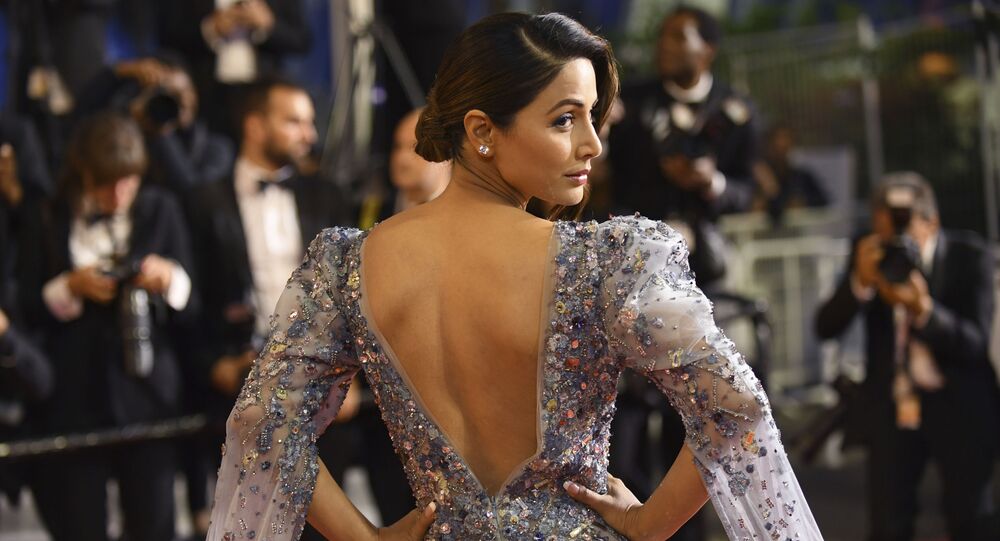 Hacking My Personal Accounts Won't Make Any Difference to Me or My Life, Says Bollywood’s Hina Khan

New Delhi (Sputnik): Hina Khan made headlines when she walked the Cannes Red Carpet to reveal the first look of her debut Bollywood film “Lines” in 2019. She also took time off to meet Indian star Priyanka Chopra, who was simply in awe at her success in the acting world, given that she lacked a 'godfather' or inside help.

During the promotion of her film in Delhi,  Sputnik asked how she would react if such a thing happened to her personally, with her endless fans and followers. She said, “well it depends how we deal with technology and how much I am dependent on it.”

“A lot of people ask me that what will happen if your Instagram is hacked, because every second or third day I get messages on my personal number that your new twitter password is this or your new Instagram password is this; that means someone is trying to hack it. So I say okay, do it, so it depends on how used to it you are - to technology. How important social media or the rest of the apps are to you,” she added.

“I can work without social media. Also, I have the option to make a new account, so hacking is not going to change my followers. That person will just take my account away,”  said the actress, who is also working on an “Indo-Hollywood” project titled “The Country of the Blind,” in which she plays the role of a blind girl named Gosha.

Directed by Vikram Bhatt, Hina plays the role of a fashion editor in “Hacked”, who leads a happy life until an obsessive young boy becomes attracted to her. She said that initially she was hesitant about taking this project, but for her, the message of how to deal with hackers and cyber crime needed to be told.

“I was very sceptical and nervous, I didn’t know whether I should take up such a project because there has never been an open talking about such an issue when it comes to films so I wasn’t sure and Vikram was very vocal about it, that he wants an immediate release after he shoots the film, so I knew technically it might be my debut film (‘Hacked’ will be released on 7 February, before her debut film ‘Lines’),” she said.

“However I must tell you guys that this film was co-written by an ethical hacker, a coder, so I got to know about a lot of real-life stories, real life incidents which happened with girls, women, and men, as anyone can get hacked. That moved me and I decided to take this up as I think it can change people’s perceptions toward hacking and cyber crime, and maybe people would learn something from watching the film, and they would speak about it openly. I feel it’s very important that we speak about it, which we usually don’t do,” added the actress, who rose to instant success with her popular role as a daughter-in-law in the television show “Yeh Rishta Kya Kehlata Hai'”.

“What attracted me towards this role is that she is very fierce and courageous; of course, she goes through a lot of pain, her life is traumatised. There comes a point when she completely breaks down but then comes the strength which is in you. I feel being vulnerable in certain situations is not a problem or disease; it can happen to anybody, as we all are humans, but what matters is how we fight back. We should have that courage,” said Hina.

After playing the role of a sari-clad character for around eight years in the TV show, Hina changed her image with a glamorous transformation in the TV reality show “Big Boss” and she felt this transformation from a simple girl to a fashionable diva helped her get this project.

“I feel I got this film because of my glamour, because she is the chief editor of a fashion magazine and Vikram depicted me like that, so I think should keep it up (when it comes to glamour). I should not let the glamour die. However I think eventually it’s your talent that helps you in surviving in this industry and we should focus on that,” she said.

Hina not only made heads turn with her acting prowess, she also grabbed headlines when people trolled her on different occasions. Whether dealing with a famous editor from an entertainment magazine mocking her Cannes look or a popular film critic questioning her skills, she has faced everything with poise and dignity.

When asked about such cases, she told Sputnik, “A film critic has every right to talk about the film, give an opinion, good or bad, and I agree that we should not get intimidated and it can happen with anyone, but let the film release. When the trailer was loved and it was trending for five days, it was a big deal for me, especially when I am not from this industry.  Then when someone out of the box is giving unwanted advise on something which is not even there. You have every right to express (what you feel) but at the right time."

“Such things don’t hurt me as he can’t take the credit away.”