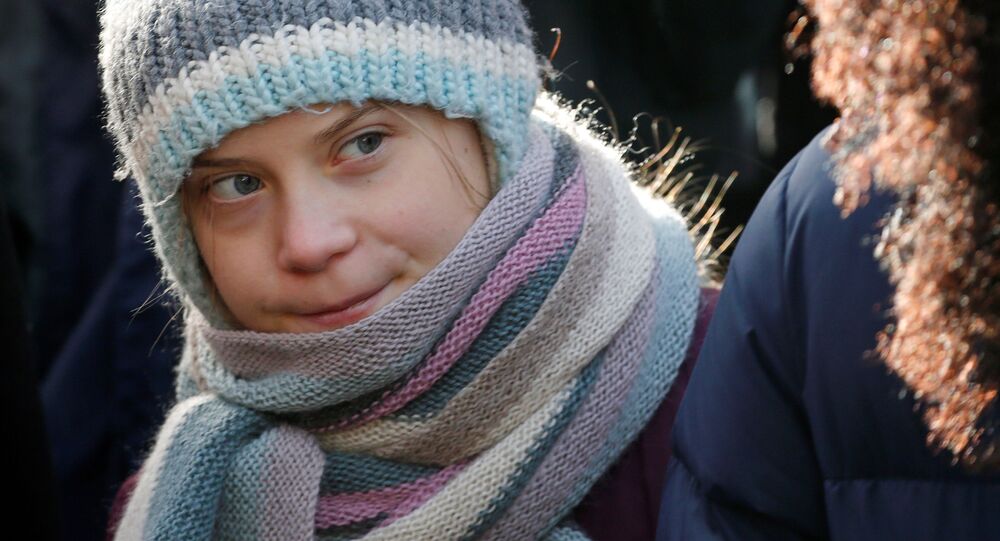 Teen climate activist Greta Thunberg, whose protests have attracted millions of people across the globe, has become an increasingly influential figurehead for youth climate activism, with many claiming to be inspired by her words and passion, while her critics perceive her as divisive and confrontational.

Teen climate activist Greta Thunberg said on Instagram on Wednesday that she has applied to trademark her name and that of the international school strike movement, 'Fridays For Future', that she inspired in 2018.

The move would allow her to sue people and companies for trying to misuse her name or that of the movement for commercial purposes.

“I assure you, I and the other school strikers have absolutely no interests in trademarks. But unfortunately it needs to be done,” she said on the social network.

Impostors, trademarks, commercial interests, royalties and foundation... First: Unfortunately there are still people who are trying to impersonate me or falsely claim that they "represent" me in order to communicate with high profile people, politicians, media, artists etc. Please be aware that this is happening and be extremely suspicious if you are contacted by ”me” or someone saying they ”represent” me. I apologize to anyone who has been contacted - and even misled - by this kind of behavior. Second: My name and the #FridaysForFuture movement are constantly being used for commercial purposes without any consent whatsoever. It happens for instance in marketing, selling of products and people collecting money in my and the movement’s name. That is why I’ve applied to register my name, Fridays For Future, Skolstrejk för klimatet etc as trademarks. This action is to protect the movement and its activities. It is also needed to enable my pro bono legal help to take necessary action against people or corporations etc who are trying to use me and the movement in purposes not in line with what the movement stands for. I assure you, I and the other school strikers have absolutely no interests in trademarks. But unfortunately it needs to be done. Fridays For Future is a global movement founded by me. It belongs to anyone taking part in it, above all the young people. It can - and must - not be used for individual or commercial purposes. And third: together with my family I’m setting up a foundation. It’s already registered and existing, but it not is not yet up and running. This is strictly nonprofit of course and there are no interests in philanthropy. It is just something that is needed for handling money (book royalties, donations, prize money etc) in a completely transparent way. For instance, taxes have to be paid before we can give them away to specified purposes and charities. This takes a lot of time and work, and when the foundation is fully up and running I will tell you more. The foundation’s aim will be to promote ecological, climatic and social sustainability as well as mental health. Love/ Greta

Thunberg added she had also applied to patent “Skolstrejk for klimatet”, school strike for the climate in Swedish - the wording on the placard she held when she began her solitary protest outside the Swedish parliament in 2018.

“My name and the #FridaysForFuture movement are constantly being used for commercial purposes without any consent whatsoever. It happens for instance in marketing, selling of products and people collecting money in my and the movement’s name,” the activist wrote on her Instagram account.

Thunberg also said she was setting up a non-profit-making foundation to deal with the financial aspects of #Fridays for Future, such as book royalties, donations and prize money, emphasising it would be "completely transparent."

"The foundation's aim will be to promote ecological, climatic and social sustainability, as well as mental health," Thunberg wrote.

Netizens reacted immediately, with many commenting it was “always about the money”.

It was only a matter of time before this happen.🙄

Kmart will soon be running with Bangladeshi made ‘how dare you’ kids and teens fashion line!

Because she is a money making commodity. Watch, her name will become some sort of stamp of approval. "Greta Approves" will start popping up on products.

Should have trademarked Greta Doomberg.

I seriously cannot believe how gullible people are!!! It was always about money & power. It has never been about the climate. It is one big scam. One hell of a lie. Who was it that said "Make the lie big, make it simple, keep saying it and eventually they will believe it".

Thunberg hoax is probably the huge media stunt cash machine and inventive way to become millionaire and/or useless politician that will never work for this $. Will just take from working people for bullshit armageddon preaching. I m not referring to kid, but to machinery behind

​Some social media fans mocked the climate activist for her doomsday predictions.

That is awesome. What will happen to her capitalist proceeds once the earth is gone?

​Others wondered who was the driving force behind her current decision to trademark her name.

Now this is something to consider ?

Are her parents using her to make a comfortable living ?

Her gold digging parents have applied for trademark.

​Others on social media took the opportunity to take pity on the child that they believed should be “back in school”.

She’s always angry! Looks as if possessed. Whoever is doing it to her will never know. I really feel sorry for her.

Can her parents take her back to school. So she can be around kids her own age and be normal ffs

​Twitter users also responded with a splurge of memes.

​Teen activist Greta Thunberg rose to international prominence in 2018 after launching a school climate strike movement, first outside the Swedish parliament and then worldwide.

On 23 September 2019 in New York, the United Nations General Assembly held the Climate Action Summit, where 16-year-old Thunberg raged at state leaders for inaction on the challenges of climate change, berating them for “having stolen her dreams and her childhood”.

The address went viral, spreading across social media platforms and sparking a heated debate that split netizens and officials.

Thunberg was named Time magazine’s person of the year for 2019 - the youngest person to have ever received the accolade.

However, the "Greta phenomenon" has attracted plenty of critics, too, as some perceive her drive to hold world leaders to account as confrontational and divisive.

'Is She the Chief Economist?': Mnuchin Tells Greta Thunberg to Go Study Economics in College