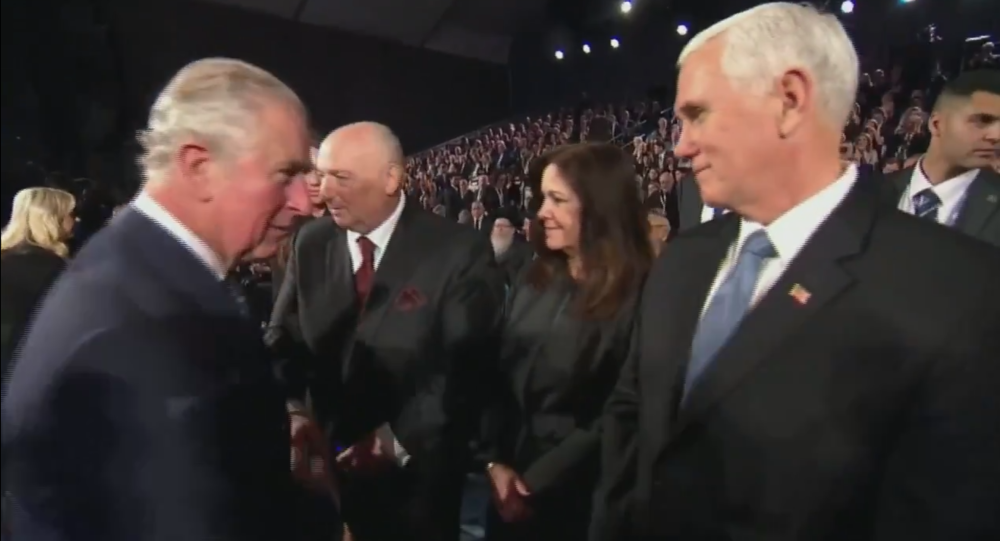 The US vice president joined the Russian president and dozens of other gathered leaders at a Holocaust commemoration event in Jerusalem, Israel on Thursday.

US Vice President Mike Pence took the initiative and approached world leaders gathered at the Fifth World Holocaust Forum to exchange pleasantries and a handshake after appearing to get snubbed by both Russian President Vladimir Putin and the UK’s Prince Charles.

After giving his speech at the event, Putin approached French President Emmanuel Macron, giving him a firm handshake, briefly sitting down alongside Israeli President Reuven Rivlin before getting back up to shake Prince Charles’s hand. Vice President Pence could be seen closely observing the exchange from a distance.

Later, after delivering his own remarks at the event, Pence approached Macron, Charles, Rivlin, and Putin and shook their hands, exchanging a few words with the Russian president.

Tweet reads: “Pence approached Putin and greeted him himself.”

Charles, for his part, appeared to demonstratively avoid shaking Pence’s hand earlier as he entered the conference hall, speaking with and shaking the hands of leaders to the left and right of the vice president but walking by him toward his seat.

It’s not immediately clear what motivated the Prince of Wales’ apparent snub. President Donald Trump once mistakenly referred to the royal as the "Prince of Whales" on Twitter last year, and the two men have clashed on climate change. The last time Pence and Charles met in 2018 they appeared to exchange a few pleasantries.

The US vice president, a strong proponent of taking a tougher line on Russia, is known for his diplomatic posturing. In late 2018, during a meeting of the East Asia Summit in Singapore, Pence greeted Putin with a handshake and the best steely glare he could muster after being approached by the Russian president.