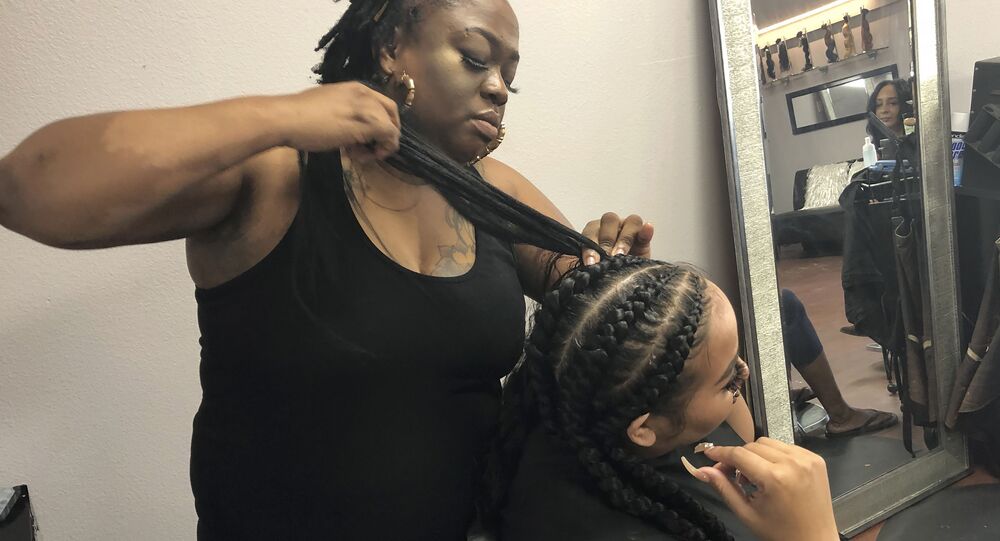 After Gucci had to apologise for their infamous black-face sweater and Dolce & Gabbana saw their shops in China boycotted over a special commercial that featured an Asian model eating a pizza with chopsticks, Comme des Garçons has joined the club of fashion labels embroiled in racial controversies.

Tokyo-based fashion house Comme des Garçons has apologised for white models wearing black-haired cornrow wigs during its men’s fall/winter 2020 show at Paris Fashion Week. The brand has been accused of cultural appropriation because this particular hairstyle resembles braids that are considered typical for black people, while some dark-skinned models sported their own hair on the catwalk.

“The inspiration for the headpieces for Comme des Garçons menswear FW’20 show was the look of an Egyptian prince. It was never ever our intention to disrespect or hurt anyone – we deeply and sincerely apologise for any offense it has caused”, the fashion house said in the statement, published by the outlet Dazed.

Earlier, stylist Julien d’Ys, who picked the wigs of discord for the show, defended it on Instagram. Although he first dismissed such allegations as “stupid” in a comment to his post from the backstage amid a wave of criticism, he then apologised to those who were offended with a special statement, arguing that the inspiration was an Egyptian prince.

“Dear all, My inspiration for the comme des garçons [sic] show was Egyptian prince A Look [sic] i found truly beautiful and inspirational. A look that was an hommage. Never was it my intention to hurt or offend anyone, ever. If I did I deeply apologize”, the post reads.

Dear all, My inspiration for the comme des garçons show was Egyptian prince A Look i found truly beautiful and inspirational. A look that was an hommage. Never was it my intention to hurt or offend anyone , ever. If I did I deeply apologize. ❤️ Julien d’Ys

Some big names of the fashion world supported the hairstylist under fire, including former French Vogue editor Carine Roitfeld, photographer Steven Klein, and even designer Marc Jacobs, who ignited an appropriation scandal with models, wearing dreadlocks at the SS17 show. However, they also faced a backlash in the comments.

On Saturday, the industry watchdog Diet Prada shamed the avant-garde Japanese label, noticing that they had already been marred by a racial scandal and “cast their first black models in over 20 years for their FW18 show, following critical comments from netizens who noticed that they hadn’t featured a black model since 1994”. The blogger added that they “seemed to have taken a step back with their men’s show, this time putting white models in cornrow wigs”, while some black models also sported the hairpieces and others wore their own hair.

Many joined in the shaming of the brand, including model and activist Adwoa Aboah, commenting: “Are we surprised?”

© Sputnik / Asatur Yesayants
‘Black Panther’ Naomi Campbell Tears German Elle Apart Over Feature on Dark-Skinned Models
This is not the first time that fashion brands have been marred in racial controversies. Just last year, Italian luxury fashion brand Gucci landed in the midst of a racism scandal due to a black balaclava jumper that featured a cut-out at a mouth outlined in red. The contentious design was dubbed by critics “Blackface Gucci”, while the company said it was "deeply apologising for the offence caused by the wool balaclava jumper".

Before that, in 2018, Swedish mass-market giant H&M landed in hot water over perceived "racist overtones" in its children's collection, which featured a photograph of a black boy wearing a hoodie with the text "coolest monkey in the jungle". Following a tweet by an outraged blogger, it went viral, drawing massive criticism on social media. The brand apologised for any perceived insult that it had caused.

From Kissing Statesmen to 'Blackface' Jumper: Top-7 Advertising Whoopsies of the Decade