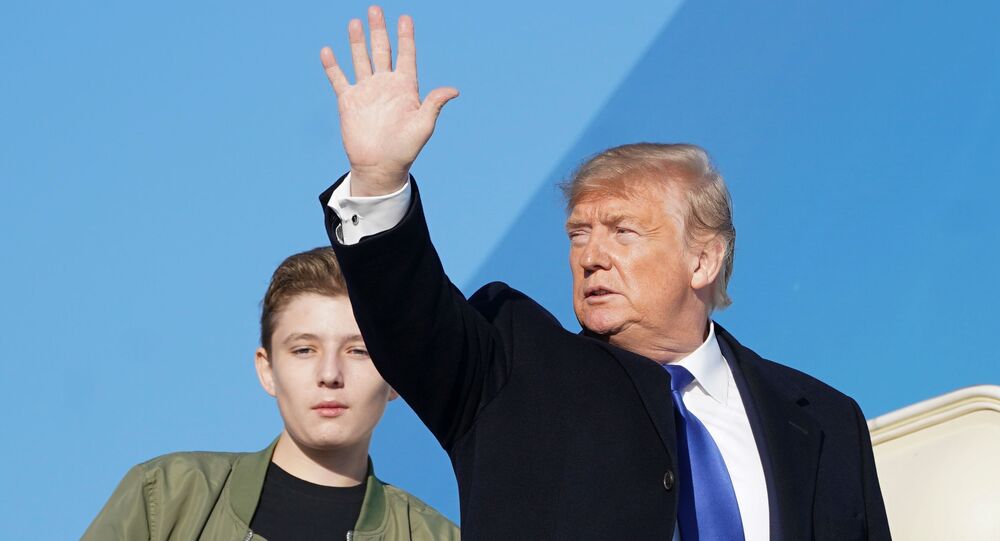 One of America’s first sons, Barron Trump, has not been a frequent guest at high-profile public events and has rarely been pictured when not accompanied in public by his parents, due to strict White House rules. However, his rapid growth over the last three years has been one among many hotly discussed topics surrounding the presidential family.

As America’s First Family was heading to Florida over the weekend, Donald Trump’s youngest son Barron was spotted looking stylish and even more grown-up since the last time he was pictured, sending shockwaves among Twitter users.

Barron, 13, wore a stunning olive green bomber jacket and New Balance sneakers, towering over both of his parents as the family was heading to Trump’s Mar-a-Lago resort in Florida.

Netizens could not help but wonder what caused such a rapid increase in the presidential son’s height, who has now grown significantly taller than his father’s 6-foot-2, while also pointing to his handsome and confident posture.

What are they feeding that kid?

That's a hell of a growth spurt

Give me some White House hamburgers!

Not only has Barron grown but he seems to be walking with much more confidence. Amazing young man & First Family 💕

Many even suggested that Barron’s assertive look would soon allow him to succeed his father in the White House, as Donald Trump is expecting the beginning of his impeachment trial in the Senate on Tuesday.

Our Barron is growing up! Love he was talking with his parents while walking and then turned and waved. Future President?

Ummm...Barron is gonna play in the NBA, be a senator at 33, marry a super model, then be a two term President.

Barron is now the president

Barron is Donald Trump’s third son as well as his fifth and youngest child, currently attending a private school in Potomac, Maryland. According to White House rules, he cannot be readily photographed, unless seen in public with his parents. Meanwhile, there has previously been some speculation among observers and social media users that Donald Trump’s son might be on the “autism spectrum” due to his allegedly “socially awkward” public behaviour.