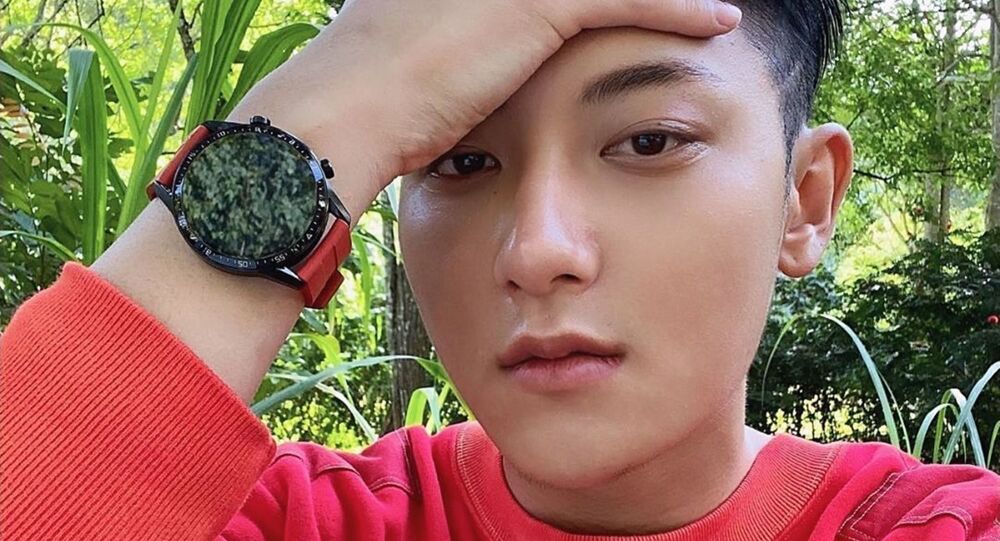 Former EXO Rapper Z.Tao in Trouble After Being Mistaken for Member of BTS

An awkward situation took place in Iceland, where the singer was filming a variety show.

Chinese rapper, singer, and songwriter Z.Tao found himself at the centre of controversy after a group of girls on the street mistook him for a member of the popular K-pop boy band BTS.

During the filming of a Chinese variety show in Iceland, the former EXO member was approached by a group of girls; he thought they might be fans of his and suggested taking a photo together. After the photo, the girls asked if Z.Tao is a BTS member, because he looks like one of them. Z.Tao thanked the girls for the compliment, but asked whether they know another popular K-pop boy band - EXO - because he was a member of that group in the past. The girls, however, did not respond, but laughed awkwardly. A video of the moment has been shared on Twitter.

HUANG ZITAO GOT MISTAKEN AS A B*S MEMBER IM DECEASED OMG 💀
See the thread below for full translation 👀 pic.twitter.com/4YmebnY4Y0

​After the singer had walked away from the scene with the filming crew, he said, jokingly while pretending to be embarrassed, that he wanted that part to be cut from the show because the girls mistook him for a member of the boy band BTS, while they weren’t even as popular as EXO when he was a member.

Such a comment created a controversy, because ARMY (official name of BTS fandom) found such a response offensive.

He already left WTF is he so stuck on the past? Fcking rude,what if a bts member had said this on tv about exo? Exols were crying arrogance over bts not name dropping anyone but we have weird ass looking Tao talkn sht 🤦🏾‍♀️🤦🏾‍♀️🤦🏾‍♀️🤦🏾‍♀️🤦🏾‍♀️.
The sooner everyone understands BTS is above their pic.twitter.com/s7x0PM6NTT

the girls really lived on "all asians are alike" prejudice which is definitely not a good thing but then tao saying bts werent as popular as they were(exo) is not funny and kind of rude, sorry pic.twitter.com/a9gWzIUiYR

EXO-L, the fan base of EXO, where divided in their reactions, as some of them took it as a joke, while others were happy that Z.Tao mentioned EXO for the first time in a long time and some got involved in the confrontation with ARMY:

hearing tao say exo again makes me :’) but also this vid makes me feel awk bc how are they gonna be like “u look like bts” ...... no homegirl he dont are u blind he literally doesn’t look like a SINGLE member lmao pic.twitter.com/Jk3dRb92jH

"PLEASE CUT THIS!" (when a girl said he looks like a member of bangtan)
"THEY SAID I LOOK LIEK SOMEONE IN BTS!"
"THEY TELL ME I LOOK A BOY IN BTS!"
“they weren’t even as popular as us last time”

armys are the first to make fun of exo losing members which happened 5 years ago but now that tao said something about bts he's suddenly an exo member and exo should be the one hated/dragged .. y'all don't care and will jump any opportunity to hate on exo

Any armys who actually know about their history know Tao was just frustratingly stating a fact that Exo was much bigger than bts in 2015. pic.twitter.com/jP9tzqYiA1

​Some of fans of K-pop didn't participate in the fanwar and just pointed attention on the girls comments about Z.Tao and found it racist.

the whole tao situation should not be about bts vs exo, it should be about clear xenophobia but ok y’all love fanwars

All these girls don't even know bts , tao or exo and it show.
Can't they clam tf down when the see Asian guy?
Anyway I hope this won't bring fanwarpic.twitter.com/Y7kuhw2g7P

can't believe Tao ignored those racist white girls and took offence at not being called exo because bts was less famous than them...and y'all are just eating it up

So Tao was rightfully offended that some white girls implied that all Asian men look alike by saying he looks like a bts member, he corrected them and said that exo was very popular too. I’m not seeing a problem except for fetishism and a sprinkle of racism so. pic.twitter.com/3Lik906Wog

​Huang Zitao, known by the nickname Z.Tao, left the K-pop boy band EXO in 2015 following a lawsuit against the group’s label, SM Entertainment. He created his own agency and has run several business projects in China while acting and making music. He has great influence in the country as an artist and was ranked among the most famous celebrities in the Forbes China Celebrity 100.