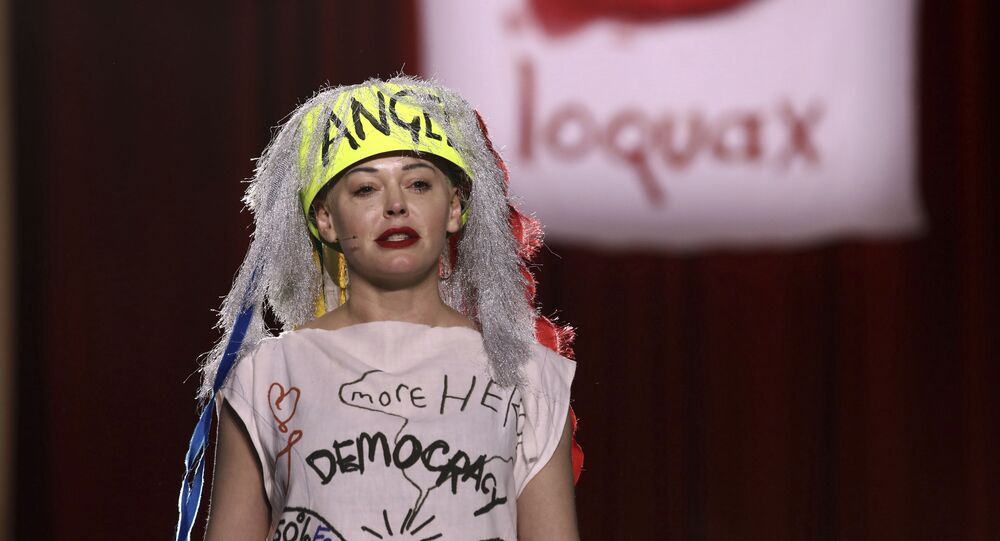 The US actress-turned activist, who became one of the most prominent voices of the MeToo movement and remains a persistent Trump critic, has taken to Twitter amid the escalation in the Middle East prompted by the killing of one of the top Iranian commanders, Qassem Soleimani, in a US strike in Iran. Her tirade has prompted widespread commenter ire.

Film celebrity Rose McGowan, who left the Hollywood spotlight after the MeToo scandal erupted, has jumped into the foreign policy debate with a message to Iran amid the escalation over the killing of the Iranian Islamic Revolutionary Guard Corps (IRGC) Quds Force chief, Qasem Soleimani. Appearing to tweet on behalf of all Americans, she pleaded with Tehran, “do not kill us”, saying that America is currently “being held hostage by a terrorist regime” - a reference to the Trump administration - as the #dearIran hashtag is trending.

Dear #Iran, The USA has disrespected your country, your flag, your people. 52% of us humbly apologize. We want peace with your nation. We are being held hostage by a terrorist regime. We do not know how to escape. Please do not kill us. #Soleimani pic.twitter.com/YE54CqGCdr

​She added her address to US President Donald Trump, as well, tweeting separately: “Thanks a lot, d**head”.

Thanks a lot, dickhead @realDonaldTrump

​Her “please-do-not-kill-us” entreaty prompted a Twitter storm, gaining some 40,000 comments, many of which gave the impression of being stunned or outraged, while many demanded that McGowan delete her comment or her entire account.

"wE aRe BeInG hElD hOsTaGe!!!"

She says from a nice big house in a good neighbourhood, with the money and resources to travel anywhere on the planet.

Hey Rose, If Iran is so great, you should go hang out there in the EXACT OUTFIT you're wearing in your profile picture and let us all know how it goes.

What are you on.

He had already killed a ton of us. That was the problem.

​She responded to a few, for instance, replying to a command to delete her account: “Eat s**t”, or debating that the key point was that the US acted illegally even though Soleimani was “an evil evil man”.

“Of course Soleimani was an evil evil [sic]man who did evil evil [sic] things. But that at this moment is not the fucking point. The United States is morally corrupt and acts illegally. It is only logical to appeal to Iran’s pride by apologizing. I’m taking one for the team,” she posted, adding a hashtag #TeamStayAlive.

In an additional tweet, she detailed to another critic that she did not side with Iran.

​Hours after her now-famous tirade, she tried to roll the debate down, explaining that, like many, she was “freaking out” because “we may have any impending war.”

Ok, so I freaked out because we may have any impending war. Sometimes it’s okay to freak out on those in power. It’s our right. That is what so many Brave soldiers have fought for. That is democracy. I do not want any more American soldiers killed. That’s it.

Soleimani was killed, along with several senior members of Iraq's Shia Popular Mobilisation Forces (PMF), in Iraq after Tuesday's storming of the US Embassy in Baghdad by pro-Iranian Shia protesters. The US Department of Defence said that its armed forces carried out the airstrikes to kill the Quds leader at the direction of US President Donald Trump. Iranian Supreme Leader Ali Khamenei stated that the death of the Quds commander will only double the motivation for resistance against the US and Israel.