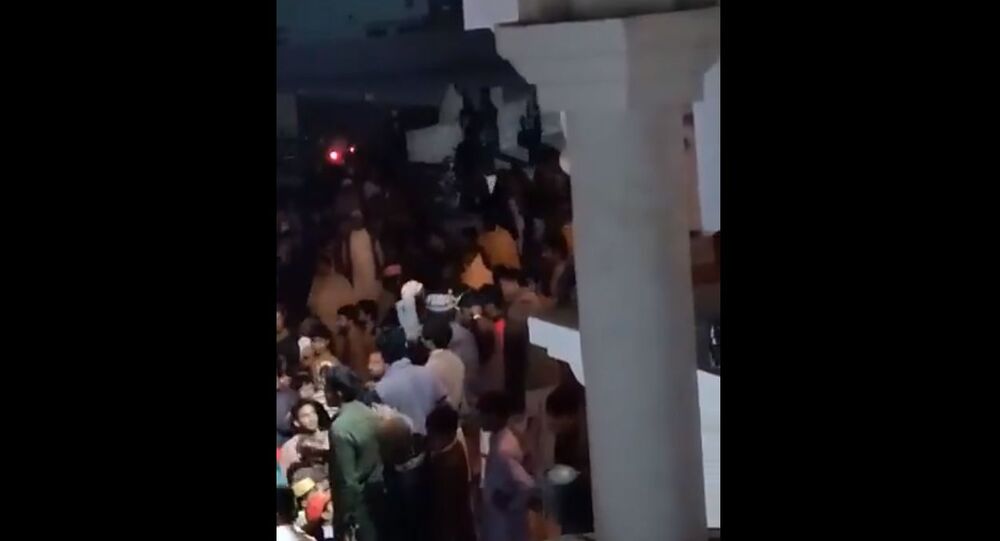 New Delhi (Sputnik): Tensions have erupted over the alleged abduction and conversion of a Sikh girl for marrying a Muslim. According to media reports, the girl is the daughter of a Sikh priest. The Indian government has expressed concern at the vandalism carried out at the revered Nankana Sahib Gurdwara.

Major tension erupted at Nankana Sahib, a historic Sikh shrine in Pakistan’s Punjab province, after hundreds of people started pelting stones and threatening to destroy it on Friday evening. An unknown number of pilgrims were already inside it as an angry mob resorted to the hurling of stones.

The mob was being led by the family of Mohammad Hassan, the young man who allegedly abducted Sikh girl Jagjit Kaur.

The local administration has deployed dozens of policemen at the site to control the mob. Nevertheless, the crowd’s size has been increasing, since Mohammed Hassan’s brother used the Facebook Live telecast to give a public call to fellow Muslims to join him at the site.

In the live video, Hassan’s furious brother narrates his family’s ordeal at the hands of the authorities, who have been pressing their family members to return the girl. He says the officers visited their house and even thrashed his mother and sisters. Surrounded by a supporting crowd, he also has also threatened to rename the place Nankana Sahib to a Muslim name - Gulam Aane Mustafa.

“Local authorities (Deputy Commissioner Raja Mansoor Ahmed and others) have been taking side with Sikhs. They are torturing our family members and asked us to return the Sikh girl to their original family. I warn the authorities not to take side with the Sikhs. We will tear apart the Sikhs from this place”, Mohammed Hassan’s brother stated while appealing people to join him.

He says, they are being harassed despite, in a video message that appeared in August 2019, the Sikh girl claiming to have willingly converted to Islam and to have taken part in Islamic recitations for her wedding.

​Meanwhile, the Indian Foreign Ministry has strongly condemned "these wanton acts of destruction and desecration of the holy place" and called upon the Imran Khan government to take immediate steps to ensure the safety, security, and welfare of the members of the Sikh community.

"Members of the minority Sikh community have been subjected to acts of violence in the holy city of Nankana Sahib, the birthplace of Shri Guru Nanak Dev ji. These reprehensible actions followed the forcible abduction and conversion of Jagjit Kaur, the Sikh girl who was kidnapped from her home in the city of Nankana Sahib in August last year", the statement issued by the ministry reads.

According to a 2010 survey conducted by an NGO, namely the Sikh Resource and Study Centre (SRSC), the population of the Sikh community in Pakistan was estimated at around 50,000.