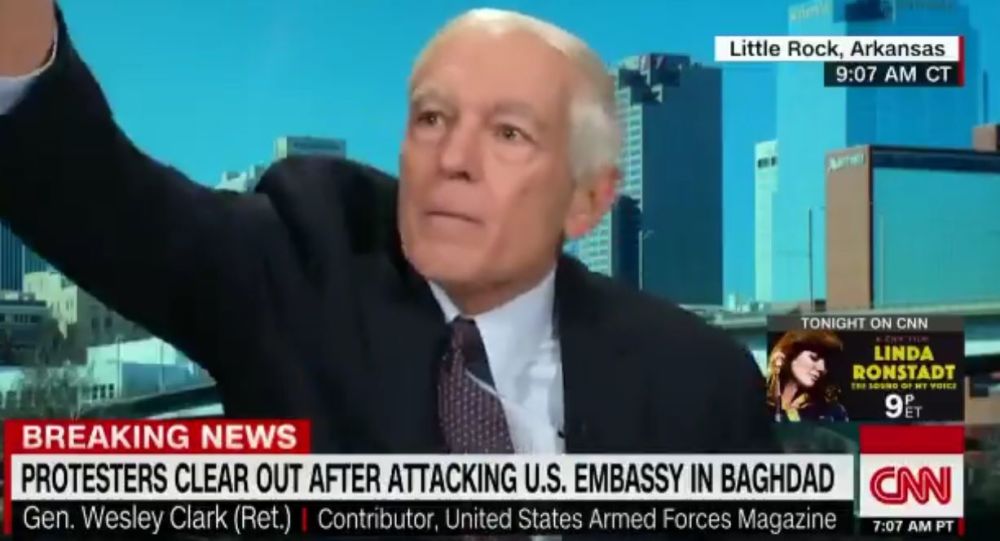 One Way to Turn Off Sound: Former NATO Commander Throws His Phone Across Room During CNN Interview

On Tuesday, the US Embassy in Baghdad was attacked by Iraqi protesters following American airstrikes that targeted Kata’ib Hezbollah bases in Syria and Iraq. The retired US Army general was then invited to CNN to discuss the incident, but something unusual happened during his on-air interview.

Retired US Army General Wesley Clark shocked CNN watchers when he flung his ringing phone across the studio while discussing Tuesday’s attack on the US Embassy in Baghdad during an on-air interview.

Speaking to CNN host Jim Sciutto, Clark commented on the Trump administration’s response to the attack in which the embassy’s reception area was vandalised by Iraqi protesters. Washington believes that the assault was orchestrated by Iran, something denied by Tehran.

“I’m glad we used diplomacy. I’m glad to see the Iraqi government being able to get its security forces engaged in this point”, NATO’s former supreme allied commander said while live on air. “But this is like by the Iranians – this is like landing a left jab in a 12-round boxing match. I mean, this is just one more punch. So they’ve taken out and attacked some Saudi oil facilities. They were put back in place”.

The retired general was then interrupted by the sound of his phone, prompting him to deal with the situation in a rather bizarre way – by launching the ringing device across the room.

“Sorry about that”, Clark said following the move, which left the CNN host laughing with a tint of shock.

“That is the best reaction to a ring I’ve seen on the air. Nicely done, General”, Sciutto replied.

The cropped version of the interview featuring the incident was then shared on social media, prompting Twitter users to question Clark’s ability to put his phone on silent mode instead of being so radical in his actions.

Someone might want to show him him how to tap "ignore".

It might have helped had he put it on silent 😆

Couldn't figure out how to turn off the ringer? OK, Boomer.

It must've been my ex wife calling. That's usually the reaction when she calls

Clark served at the Supreme Allied Commander Europe of NATO from 1997 to 2000 and commanded Operation Allied Force in the Kosovo War during his tenure. He retired from the US Army in 2000, while also joining the Democratic Party presidential nomination race in 2003 until his dropout in 2004.