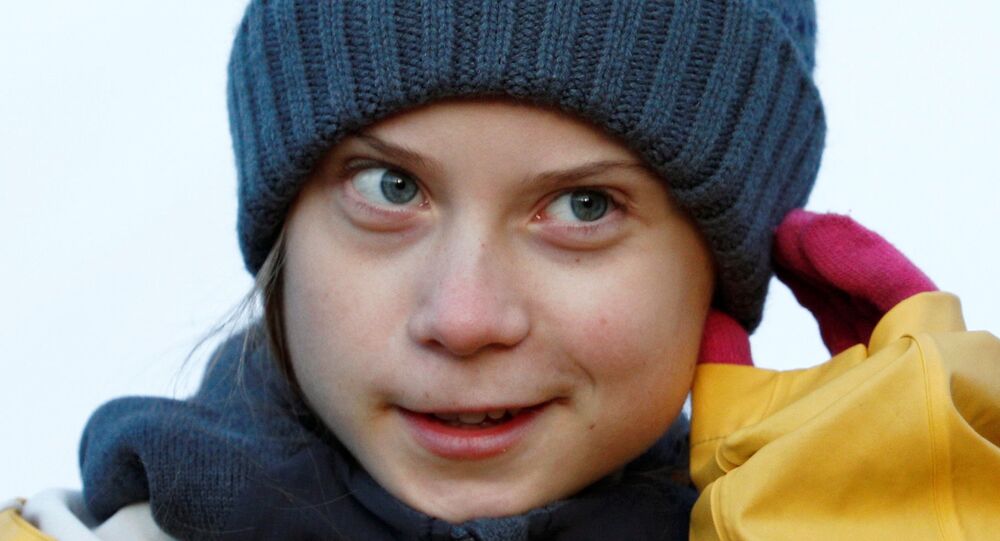 'Go Back to School Kid’: Netizens Bash 'Climate Guru' Greta Thunberg Over Her Take on #2019in5Words

In September, teen climate activist Greta Thunberg availed herself of the opportunity to stare down global leaders at the UN Climate Summit, raging at them for inaction on the challenges of climate change, since then becoming the youngest person to be named Time magazine's person of the year, and doggedly pursuing her message on social media.

Swedish climate activist Greta Thunberg, known for her impassioned plea for action at the UN General Assembly Climate Action Summit in New York in September, has jumped on the bandwagon of the currently trending end of year hashtag on Twitter #2019in5words.

Summing up the year using only five words, Greta Thunberg tweeted one of her own quotes: "Our house is on fire".

Thunberg said these words at the World Economic Forum in Davos in January of this year when delivering her climate warning to a gathering of the world's most powerful leaders.

​Netizens on social media, which the climate activist uses persistently, weighed in, with many commenting that the teen ought to “go back to school”.

I remember being 16.... I knew everything as well. Until I grew up and realized I didn't know shit about anything.

Dear Greta, climate/earth is self regulating.

A spoiled & mentally ill kid who doesn't even have primary knowledge about the world and hasn't planted a single tree is going to "save us" .. lol
Only we can save us & our environment, not some shitty noble seeker brat !!

​Others remarked that in their opinion the teen activist was poorly informed and her arguments would not hold up in a debate with those opposing her stance.

She wouldn’t stand a chance

Some openly wondered whether the teenager was being “manipulated”.

Greta, you have been told exaggerated truths. People are using you to push agendas. Relax, take a breath, smell some flowers and try being a kid - It’s fun. When you get old you can worry about stuff. I have a funny feeling the world will last long enough for you to be old!

Did you think of that all by yourself or did your handler Luisa-marie neubauer tell you to say it . .

She isn’t getting “real life experience” she is a media creation, just like the Parkland kids were a couple years ago. Time will pass, and no one will remember her in 5 years

​Greta Thunberg’s actions in 2019, most notably her emotional speech in New York, at the United Nations General Assembly Climate Action Summit, in September, have gotten her named Time magazine's youngest Person of the Year.

This comes almost a year and a half after 16-year-old Thunberg held her first climate strike. In August 2018, the school student sat alone outside the Swedish parliament flanked by a black and white sign which read: "Skolstrejk för klimatet".

Since then Thunberg, who has been diagnosed with Asperger’s syndrome, has been using social media to galvanize efforts to impact public understanding of climate change.

Her critics, meanwhile, have deplored her approach as too confrontational, divisive, and at times misinformed.

‘I’m Not Here to Impress’: Aussie PM Morrison Hits Back at Greta Thunberg Over Bushfire Remarks