It looks like Santa does exist after all and everyone knows him - one of the world's richest men, Bill Gates. The billionaire took part in Reddit's annual Secret Santa gift exchange, and in doing so brought Christmas magic to one lucky girl's life.

A Reddit user, whose name is Szor, is a longtime participant of the Secret Santa gift exchange, but she clearly did not expect that this year she would receive a gift from Bill Gates himself. The essence of the Secret Santa tradition on Reddit is that users are matched up with some other internet strangers to exchange presents.

For Szor it was her 95th Reddit gift exchange, and to her amazement when she checked the shipping page to make sure that the package was still on track, she discovered that the package weighed 81 pounds, which is almost 37 kilograms. Afterwards, Szor went to FedEx, where a giant box from Gates, which was labelled with the number 95 on each side, was waiting for her.

“I’m impressed that this is your 95th Reddit gift exchange! You seem like a very generous person, and I hope my gift makes you smile this Christmas,” Gates wrote in a personalized note, which was included in the box.

Bill, in turn, has been participating in Reddit Secret Santa since 2013.

The box itself was full of the gifts, each of which was individually wrapped. Moreover, these were not simple gifts, each of them was special for the girl as they corresponded to her interests: eight hardcover books, a manuscript copy of The Great Gatsby, sweet treats, a handmade Zelda quilt, Harry Potter and Star Wars-themed adult-level LEGO sets, even gifts for her cat and a lot of other things. 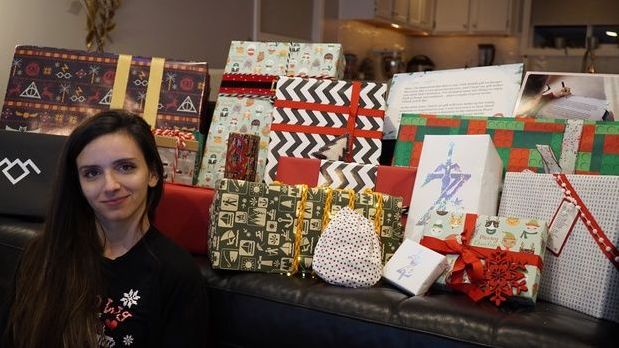 The girl showed all of the presents on her YouTube channel and posted snaps on her Reddit profile.

One of the presents was especially important for Szor, even though it wasn't something that could be wrapped.

"I know no gift will ever make up for losing someone so important to you. I was very sorry to hear about your mom, and I’ve made a donation to the American Heart Association in her memory. I hope you and your family find your ‘new normal’ this holiday season," Bill wrote in the note.