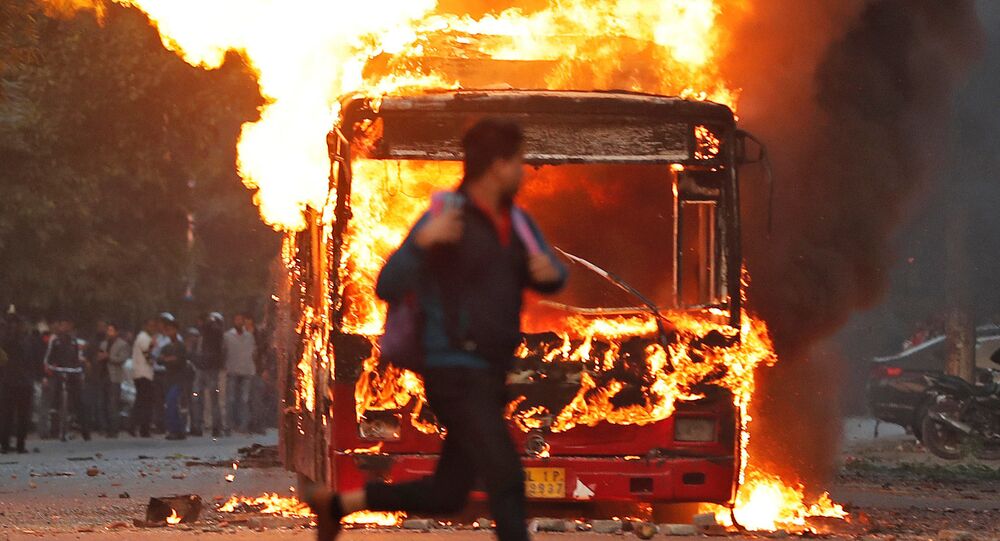 New Delhi (Sputnik): Many Bollywood stars shared their opinion on India’s newly enacted Citizenship Law and the latest addition to the list was Bollywood actress Kangana Ranaut, who stressed that when protesting it is critically important not to allow protests to become violent.

Kangana Ranaut has drawn both backlash and praise after slamming anti-citizenship law protesters for vandalising public properties, including setting buses on fire, across India.

"In our population, only three to four per cent of people pay taxes. The rest of them are actually dependent on them. So, who gives you the right to burn buses, trains, create ruckus in the country. One bus costs a lot. It's not a small amount. And the condition of this country is such that there are so many, who are dying of malnutrition," added Ranaut.

In reference to the ongoing protests against the amended law that have turned violent and left many dead or injured, she continued by saying that people should not "instigate violence".

"It's not correct for the people to instigate violence in the name of democracy. We are still stuck in the pre-Independence era. During that time, going on strikes against the people, who had captured us, not paying taxes, all of this was really cool. But today, because of democracy, your leaders have come from within you, not from Italy or Japan," said the actress during the promotion of her forthcoming film “Panga”

Some netizens asked the actress to stop "speaking scripted dialogue"...

Grow up kangana ,in real life too speaking scripted dialogue (from BJP IT cell) oh I forgot when you are getting money for dialogues so an an actor its your duty to speak it without using your brain)/knowledge#CAA_NRC_Protest https://t.co/Q394QyfjLL

​...while another user suggested that it was not smart to ask an actress about tax collection in which she was “woefully ill-informed”.

Firstly not smart to ask Kangana ji on tax collections - she is woefully ill informed. All the people pay indirect taxes and for Aam Aadmi it is a huge part of his income.
Secondly - her views have always been divisive. If only she would read Dr Ambedkar , Gandhiji https://t.co/sor78rK2Uu

A fellow Twitterian said that now people who pay indirect taxes but not direct taxes are eligible for ransacking public property, while yet another urged her to “remain silent and be thought a fool than to speak and to remove all doubt."

So , now that people who pay indirect taxes but not direct taxes are eligible for ransacking govt property .
P.s -- dactaar Saab was an IPS once & now a Aap leader , look at the transformation .

"Better to remain silent and be thought a fool than to speak and to remove all doubt."

No one told Kangana this growing up. https://t.co/87BnxmrJ3F

Delhi Deputy Chief Minister Manish Sisodia also slammed the Bollywood star over her remark on taxes, tweeting: "Even daily labourers pay indirect taxes when they buy something cheap like salt. They even pay taxes when they go to watch movies and are responsible for the income of actors".

There were several others, who endorsed the actor’s opinion “completely in agreement with what Kangana says”:

While I am completely in agreement with what Kangana says here but as a Chartered Accountant, I hate this narrative that only 3-4% pay tax- that no is more abt direct taxes; rest 100% of this country pay taxes- even a beggar pays it - via indirect taxes like GST etc! https://t.co/zi80jF1Igf

100% support to actor Kangana Ranawat on “violence” part of the tweet.
But “economics” part is wrong, & also filled with arrogance.
India collects about Rs 11 lakh crore a year in indirect tax (GST). Remember, the poor who buys, e.g. a Rs 5-biscuit, pays 90 paisa as tax (18%) https://t.co/BaXp6Y9HGY

Protests against the Citizenship Amendment Act have raged across cities and turned violent in many parts, of the country, resulting in vandalism, destruction, arson, as well as the death of at least 20 people and injuries to hundreds of people over the last few days.

The new Citizenship Amendment Act grants citizenship to Hindus, Sikhs, Buddhists, Jains, Parsis and Christians who fled religious persecution in Pakistan, Bangladesh, and Afghanistan and arrived before 31 December 2014. The legislation came under fire for what the protesters described as a violation of the Indian constitution by granting citizenship on the basis of religion and excluding Muslims.