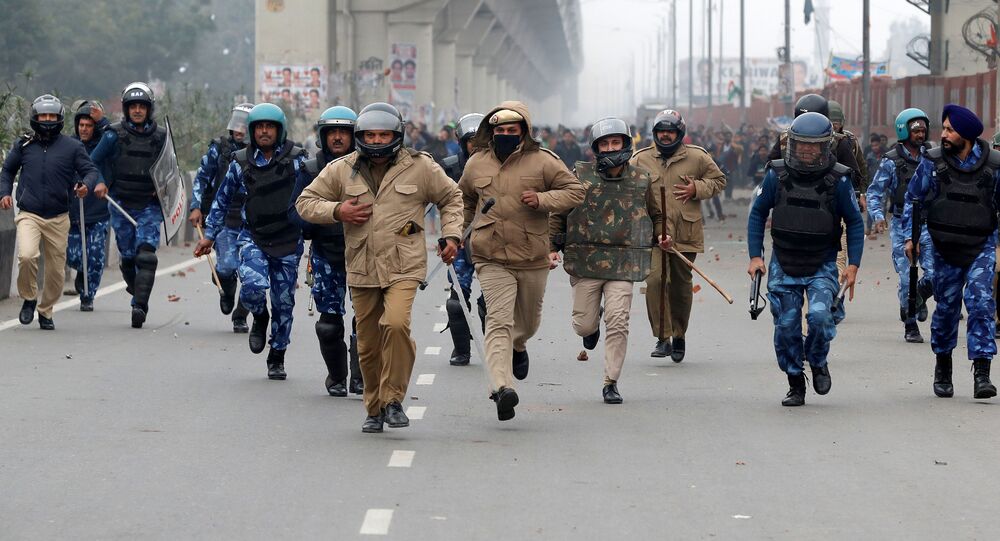 New Delhi (Sputnik): India’s capital city Delhi is witnessing violent protests similar to what’s being seen in several universities and states of the country against a new citizenship law. During clashes between police and protesters, law enforcement has resorted to baton charging and using tear gas.

As east Delhi’s sensitive area Seelampur witnessed violent protests against the Citizen Amendment Act (CAA) and National Register of Citizens (NRC) on Tuesday, a video clip of a mob chasing police on the streets of India’s national capital city has grabbed eyeballs across the Internet.

Some of the people from the mob even manhandled the officials.

Other video clips show a burnt down police post. While on one side, the mob can be seen raising slogans, the police can be seen standing on the other side of the road pelted with stones.

Protestors attacked and chased off police personnel in #Seelampur in Delhi. Police sources said the protest, called around 2pm, suddenly turned violent as the crowd was dispersing. pic.twitter.com/o82SWvF6yK

​Deputy Commissioner of Police, Northeast Delhi, R.P. Meena, said: “Initially, the protest was small but later more people joined from other areas. We urged them to go back to their houses and while dispersing they started pelting stones”.

The police official added that the force retaliated by using tear gas to control the mob. “They (mob) torched several bikes and vandalised public property. Around two rounds of bullets were fired in air to control them”.

Muslims are protesting against the new Citizenship Amendment Act (CAA) and the proposed NRC.

The CAA has allowed granting of citizenship to Hindus, Sikhs, Buddhists, Jains, Christians, and Parsis persecuted in neighbouring Bangladesh, Afghanistan, and Pakistan.

The NRC is aimed at identifying illegal immigrants and maintaining a register of all genuine Indian citizens. Protesters are terming both as anti-Muslim moves of the Indian government.