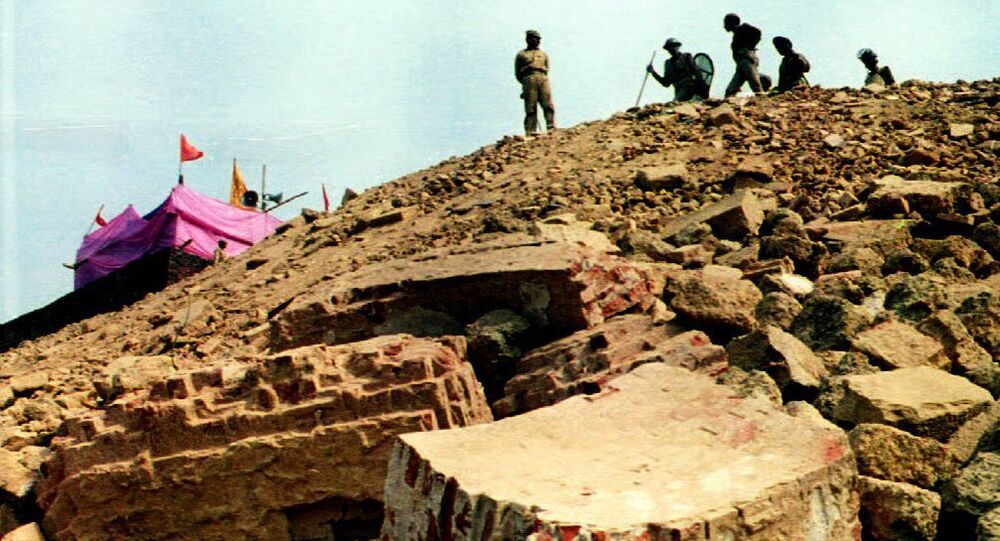 New Delhi (Sputnik): The Babri Mosque, a 16th-century Mughal structure located in Ayodhya city of India’s Uttar Pradesh state was demolished in 1992 by some Hindu groups who claimed the mosque was built by the Mughal emperor Babur after the demolition of an ancient temple dedicated to Lord Rama. Deep resentment among Muslims followed.

A video showing a sea of saffron flags held by school students taking down a humongous poster of Babri mosque, symbolically re-enacting the demolition of the 16th-century Mughal structure in Ayodhya, has been garnering wide attention on social media.

The event took place in the presence of several ministers, including federal minister Sadanand Gowda and Governor of Pudducherry Kiran Bedi, present on the occasion as chief guests.

​In the video, students can be heard chanting slogans such as “Bharat Mata Ki Jai” (praise of the land of India) and “Shri Ram Chandra in Jai” (praise of Lord Rama), hailing India as a nation and Lord Rama – whose temple was demolished by Emperor Babur. Also, cultural songs being played in the background can be heard as well.

According to the tweet, the incident occurred at a school in India’s southern state of Karnataka, run by Kalladka Prabhakar Bhat, a member of cultural and nationalistic ideology-oriented group Rashtriya Swayamsevak Sangh (RSS), the parent organisation of India’s ruling Bharatiya Janata Party (BJP).

Netizens have lashed out at the authorities blaming them for invoking hatred in children and putting the future of education in India in danger.

This is the future of education in India when the RSS-BJP takeover of our society is complete.

And this is why it's our duty to resist.pic.twitter.com/eg7IPzz3zw

Why are they instilling so much hatred in to the minds of indias new generation? This is utterly sad and horrifying I hope the saner population of india wakes up and frees up from this hinduvata mindset so india can revive its true colours accordingly to the principles of gandhi.

United by hate but divided by faith. pic.twitter.com/Uvs3S1LC0j

See how these people seeding hatred in young children.

OMG! People send kids to these hate mongering schools? How different is this from Other radical ‘schools’?

Another formation d school children made was of the proposed Shri Ram Mandir at #Ayodhya. All such performances enabled d school ensure all of its 3800+ school children participate in d annual festival of Sri Rama Vidya Kendra, Kalladka Village, near Mangalore @PTI_News @ANI pic.twitter.com/IdaoySuBY4

​A few prominent Indian personalities also re-tweeted the video of the event, criticising school authorities and targeting the RSS for propagating such an ideology.

This is how a blatantly criminal act, even according to #SupremeCourt is made into an act of heroism. #History is indeed being rewitten these days. #babrimasjiddemolition #AYODHYAVERDICT https://t.co/PqHuWL9EgZ

This is the state of the education system in our country. Will send us to the dogs.https://t.co/7j17ewQy3B

an organisation of cowards publicly celebrating its own cowardice. https://t.co/VNqgATh07R

​Since the vandalisation of Babri Mosque in 1992, the site remained a serious bone of contention between the Hindu and Muslim communities. It lasted until the Supreme Court of India recently pronounced a verdict ordering the construction of a temple at the century-old disputed site, and allotting a 5-acre (43,560 square feet) plot of land to the Muslim side for the construction of a mosque.

The RSS often labelled as a right-wing volunteer organisation, is known for taking up issues of national and religious importance in the country.

According to media reports, the number of Shakhas (one-hour meets which aim to promote nationalism and cultural awakening) has been rapidly increasing of late.

The RSS presently runs over 50,000 daily Shakhas and 10,000 weekly IT (information technology) meetings exclusively for urban professionals. These are attended by over half a million people daily, the organisation’s national publicity chief stated in August this year.