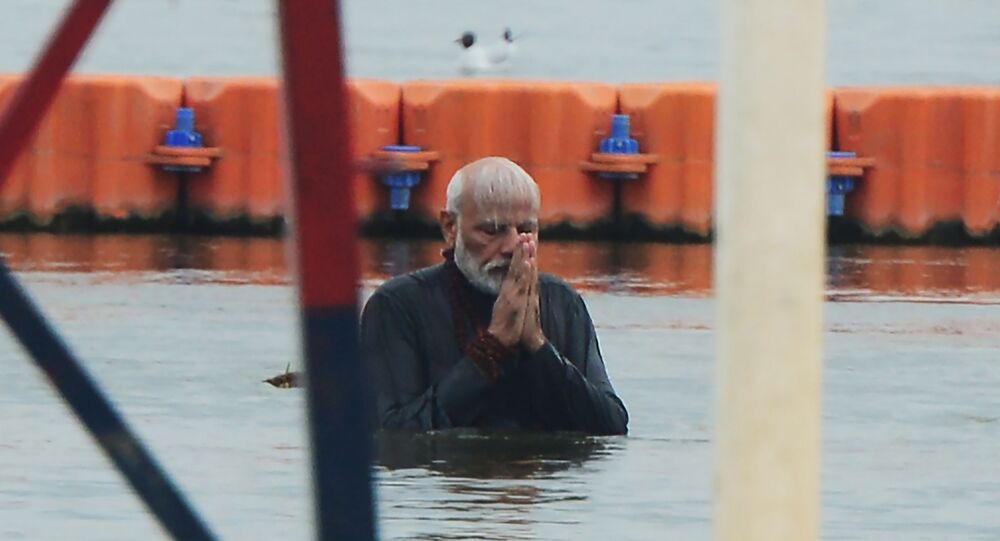 Just Like Our Economy: Netizens Mock Indian PM as He Slips on the Bank of the River Ganges - Video

New Delhi (Sputnik): The Indian economy has been facing an unprecedented slowdown for past two years despite infusing massive liquidity through various means at the government level. India’s economic growth decelerated to 4.5% in the September quarter, its slowest pace since March 2013.

A video of Indian Prime Minister Narendra Modi slipping on the staircases near the holy river Ganges (or Ganga) in Kanpur, Uttar Pradesh, has gone viral on social media.

In the clip, Modi could be seen climbing the stairs in his usual manner, when accidentally, his feet slipped from one of the stairs and he stumbled.

Netizens couldn't help but troll the prime minister and came up with a somewhat sarcastic comparison, taking a jibe at the state of Indian economy.

Narendra Modi demonstrating what he did with the economy pic.twitter.com/yuGmePOIjy

India’s Economic growth has slowed for 5 consecutive quarters. Now the growth is slower than it was in the quarter in which Modi's Government assumed office. India’s Gross Domestic Product growth has gone down from a high of 9.2% in the third quarter of the year 2016 to 5.7% in the current 4th quarter.