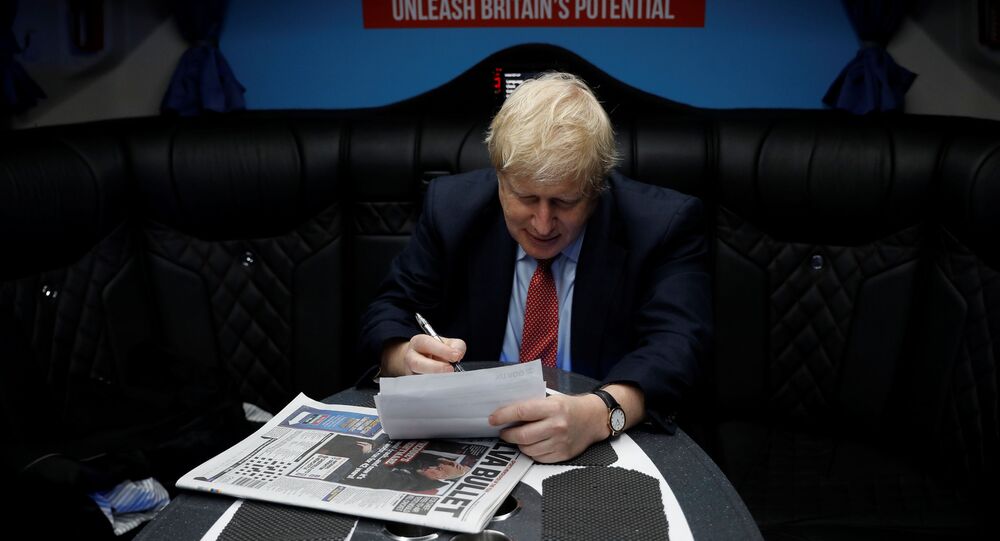 ‘Who Dun It?’ India-Style Boris Johnson ‘Election Campaign’ Video has Netizens in Splits

New Delhi (Sputnik): Ahead of a fast-approaching UK General Election set for 12 December, a traditional Indian style election campaign video is grabbing all the attention on social media.

The video, pitching Boris Johnson as UK’s next prime minister and asking voters to support him, has gone viral on social media, prompting an avalanche of hilarious reactions and memes.

However, it is yet to be confirmed if it is an actual election campaign video or just a comedy spoof.

Ok who made this Hindi video to vote for #BorisJohnson 🤣🤣🤣
Pls confess
I wanna buy you a drink pic.twitter.com/wskQed0Zpd

The video, made with precision, seems to be an election pitch for British-Indian voters in the UK.

While a Twitter user jokingly called the video “revenge for 200 years of colonisation”, a journalist with the Indian daily took it rather seriously and said the Minister of External Affairs should protest over it.

Revenge for 200 years of colonization 😏 https://t.co/ChNC8kLcko

MEA should protest this video, which depicts PM and Indian HC as supporting Conservatives, it is making the case that Britishers of Indian origin follow political dictates from India. This could be turned against the diaspora as evidence of foreign allegiance,and India could be accused of interference https://t.co/KCWUlscJl8

Now Boris is targeting the Indian community there. There is big chunk of the Hindi speaking community in the UK. Not surprised in-fact there are many TV ads those are influenced by Indian culture had seen there. This is one of them https://t.co/yRA2vM2D4C

The video surfaced on the Internet at the same time as British Prime Minister Boris Johnson visited Shri Swaminarayan Temple in London, and addressed the Indian diaspora, expressing his concerns over  “anti-Hindu” and “anti-India” sentiments in the UK. According to the United Kingdom Census 2011, more than 1,451,862 people of Indian ethnicity reside in the UK (not including those who categorised themselves as having mixed ethnicity).