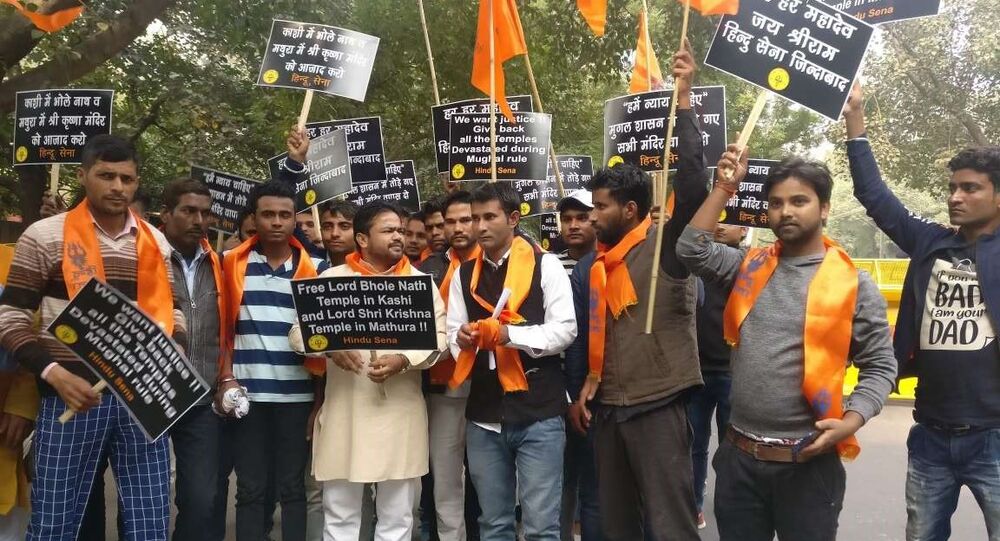 New Delhi (Sputnik): The Supreme Court of India delivered its judgment in one of the most contentious and long-drawn litigations in the country’s history, the Ayodhya land dispute case, on 9 November.

Almost a month after India’s apex court gave a verdict in the century-long Ayodhya Land Dispute case involving Hindus and Muslims, a Hindu group is now demanding that issues related to the Mathura and Kashi Temples are also settled.

Hindu Sena, a political group known for its hardcore views on Hindu issues, staged a protest in Delhi on Friday in an attempt to force the government to act.

The group said they wanted to liberate all Hindu shrines devastated by foreign Jihadi Muslims who had demolished temples and built mosques.

The protest was carried out in Delhi’s Jantar Mantar on the anniversary of the demolition of the Babri mosque in Ayodhya, the birthplace of Lord Rama, in Uttar Pradesh.

Addressing the gathering, Vishnu Gupta National President of Hindu Sena said that they welcomed the court's decision on Ram Mandir at Ayodhya and Ram Mandir will be constructed soon but their mission does not end with the decision on Ayodhya.

“We believe that temples of Mathura and Kashi Vishwanath in Uttar Pradesh are revered and holiest places of worship for Hindus. Both places are holiest by the beliefs, mythology, faith and religion. The temples have been referred to in Hindu scriptures for a very long time as a central part of worship,”  Gupta claimed.

“We call upon all Hindus across the country to make Mathura Kashi Mukti Abhiyan a national movement so that the government can fulfil our demands,” said Gupta adding that they intensify nationwide protest.

The Ayodhya land dispute, a decades-old religious conflict between the Hindu and Muslim communities in India, flared up following the 1992 demolition of a Muslim mosque, Babri Masjid, by Hindus, who claimed that the Mughal emperor Babar had demolished a Hindu temple in Ayodhya, a city in the eastern state of Uttar Pradesh.

India’s top court delivered its judgment in one of the most contentious and long-drawn litigations in the country’s history, the Ayodhya land dispute case, on 9 November.

A five-judge bench ruled that a temple should be built through a trust set up by the government on the disputed site for the Hindu community while an alternative plot of land be allocated to the Muslim community.