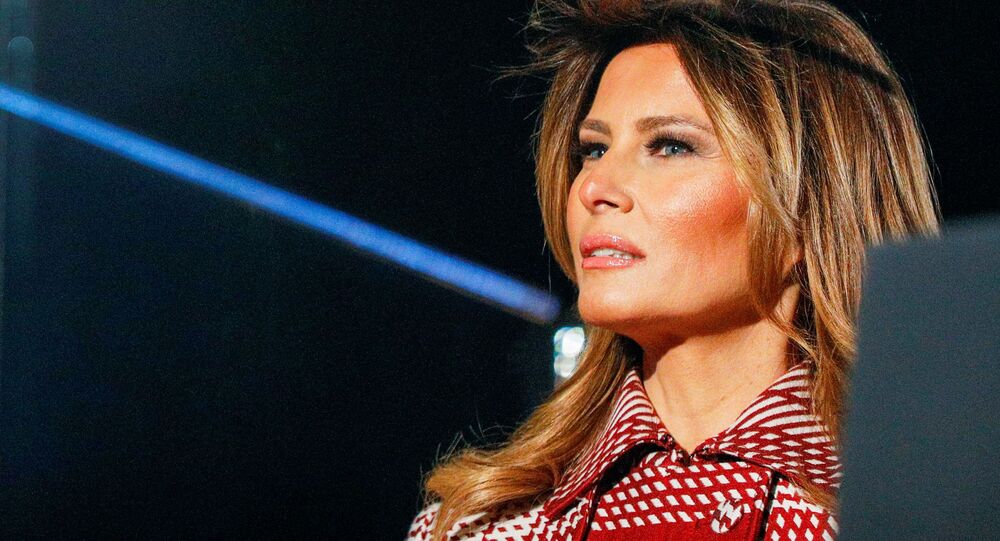 The 2019 National Christmas Tree Lighting marked the 96th year a president participated in a tradition that was launched on the Ellipse by President Calvin Coolidge over 90 years ago, when he lit a 48 foot Balsam Fir from Vermont decorated with 2,500 electric bulbs in red, white, and green on Christmas Eve 1923.

US President Donald Trump and First Lady Melania have lit up the National Christmas Tree beside the White House in a traditional ceremony in Washington Thursday night.

Another fun holiday tradition in our nation’s capital! Tonight, @POTUS and I attended @TheNationalTree lighting in @PresParkNPS. Loved seeing everyone in the holiday spirit! pic.twitter.com/taMY3hNYT1

The President had Melania Trump do the honors and push the button that lit up the tree on the Ellipse to the south of the White House.

“So we'll count down to five to that very special number,” the president said, as he briefly turned the show over to his wife.

The First Lady, dressed in a festive burgundy and cream plaid outfit, turned on the lights as the countdown got to one, and the large tree was illuminated with white bursts of light.

Responding to the Twitter post from the First Lady that featured some images from the colorful event, many netizens didn’t seem to appreciate the Christmas spirit of the event and took an opportunity to aim a few jabs at the First Lady.

Just lining those pockets as fast as you can lol

HOPEFULLY THAT WAS YOUR LAST CHRISTMAS THERE😡😡😡

no...they will have at least 5 more! and then Nicki Haley steps in...good luck with Biden or Bloomberg!

​Some seemed to wonder at the absence of Barron Trump, the youngest son of the US president and his only child with Melania.

They never seem to include him

​Many netizens, though, waxed lyrical and expressed their support for Melania Trump, posting their Christmas wishes to FLOTUS.

That coat is everything!!! Love it !!! Merry Christmas to you and your family and everyone working hard for our country! God Bless!

What a treat for everyone in attendance. Thanks for making it such a fun and festive occasion. Merry Christmas! 🎄

Invited guests to the tree lighting event included three defenders of Donald Trump in the House of Representatives, Republican Reps. Jim Jordan of Ohio, Mark Meadows of North Carolina and John Ratcliffe of Texas, as Thursday witnessed an announcement from Speaker Nancy Pelosi that the House of Representatives would begin drafting impeachment articles against President Trump, pushing ahead with a rapid timetable to set the stage for an impeachment vote before Christmas.

The entire show will be broadcast on television on Monday, 9 December, according to a release from the National Park Service.

Thursday's Tree Lighting marked the 96th year a president participated in the tradition that was started in 1923 when President Calvin Coolidge lit a Christmas tree on Christmas Eve on the Ellipse, the site where the National Christmas Tree grows today.

© AP Photo / J. Scott Applewhite
The Capitol Christmas tree is illuminated as lawmakers in the Senate work late into the evening on the Republican tax bill, in Washington, Tuesday, Dec. 19, 2017.

Who's Unstable? Netizens Mock Trump, Melania Over Video of Their Landing in London