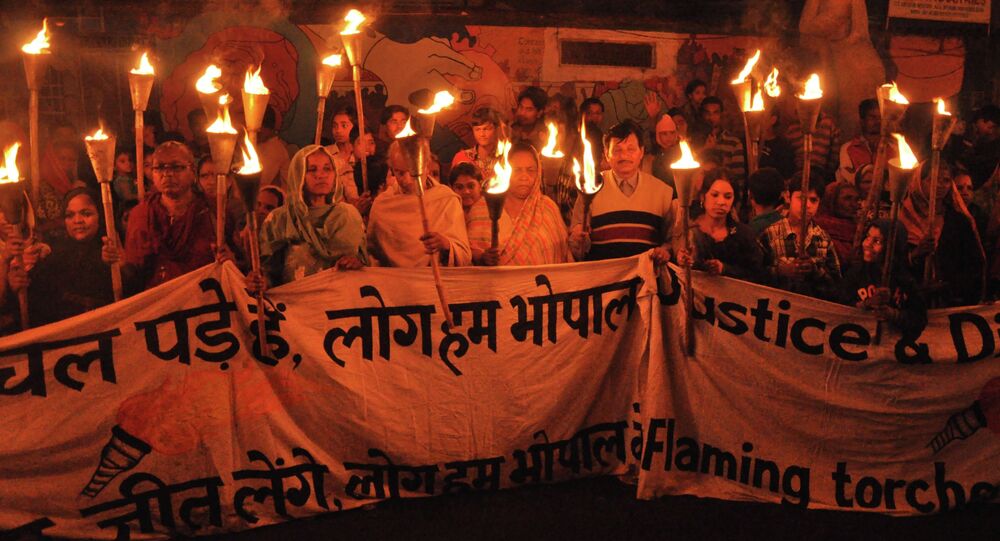 New Delhi (Sputnik): Residents of Bhopal, India were subject to a disaster of apocalyptic proportions when 30 tonnes of Methy-Iso-Cyanate leaked from a nearby chemical factory, filling the city with deadly fumes. Around 10,000 people lost their lives and about 500,000 suffered injuries due to the catastrophe known as the Bhopal Gas tragedy.

It’s been over three decades since the world's worst-ever industrial disaster, the Bhopal Gas tragedy, occurred at night between 2-3 December 1984. However, its memory still lingers in the minds of people. On its 35th anniversary, several took to Twitter to remember those who lost their lives and the hundreds of thousands who continue to suffer the long-term consequences of the disaster.

Many others have demanded justice for those who died in the tragedy due to negligence and their survivors.

Warren Anderson, the then-chairman of the Union Carbide plant where the deadly gas leak took pace, was charged for the homicide but fled to the US soon after the tragedy occurred. He died on 29 September 2014.

He was declared a fugitive by a Bhopal court in 1992 and a request for extradition was issued in 2003.

35 years ago on this day, thousands of Innocents lost lives in the #BhopalGasTragedy and lakhs were affected.

Warren Anderson, Chairman of Union Carbide, responsible for this man-made disaster, was allowed to escape by then-India PM Rajiv Gandhi.

After gas from his Union Carbide had poisoned over half a million this day in 1984, Warren Anderson landed in Bhopal and fussed why CM Arjun Singh wasn’t there to receive him.
Later, CM’s car and plane took him to Delhi, and with PM Rajiv Gandhi’s blessing, he flew out, forever. pic.twitter.com/5BQbY0ZxrZ

The most dangerous incident of
Indian History
RIP for all peoples #BhopalGasTragedy pic.twitter.com/V1NQzk1U4m

Warren Anderson has died in 2014. Many still suffering. pic.twitter.com/4Fvp1Ash4T

the number of affected communities increased to 42 from the 12 initially. The groundwater contains toxic levels of chlorinated solvents. Still the peoples are facing a serious threat from the activity which had happened on 2 December 1984#BhopalGasTragedy pic.twitter.com/kqTk1w83GV

In the wee hours of 3 December, 1984, the dead bodies of humans and animals filled the streets after the Union Carbide plant accidentally released toxic gases into the air which drifted into nearby slums, media reports said.

Even decades after the accident, people living near the abandoned plant in the Indian state of Madhya Pradesh continue to suffer from the hazardous waste and contamination of ground water. The entry to the plant, where the toxic waste remains dumped, is restricted, covered with black plastic sheets.