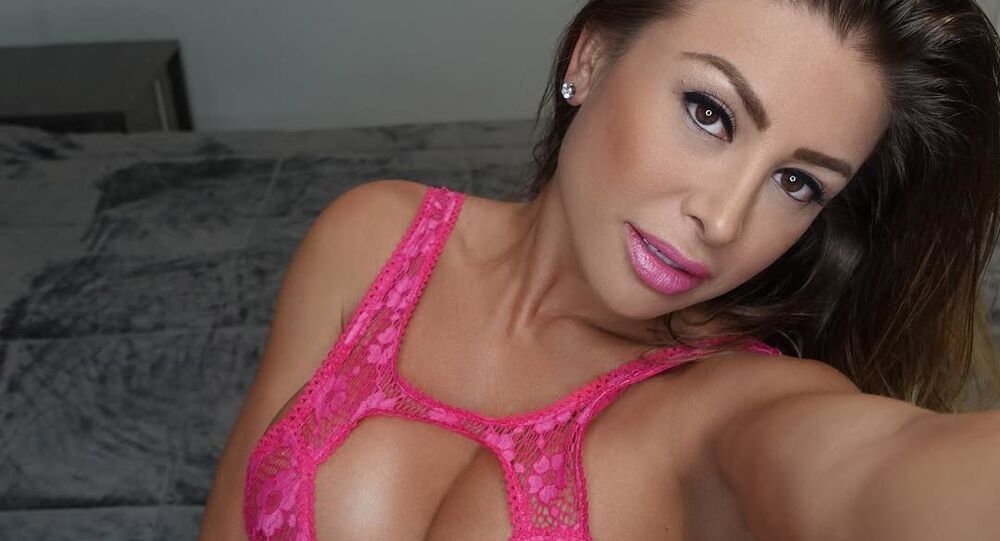 ‘Donuts Anyone?’: Playboy Model Slathers Herself With Icing, Sparks Outrage by Dancing on Shop Roof

Francia James, a viral prankster, danced around the large donut sign on the roof of Randy's Donuts in California, horrifying the shop owners as she hollered at customers.

For her latest stunt, the brazen Playboy model stripped down to her underwear and crop top, revealing her voluptuous cleavage, screaming at customers:

Customers reaction to the model's stunt varied from shock to amusement, as many laughed at her boldness, while others ogled her hot body.

Francia then climbed down the ladder and dashed away quickly from the store.

Before her rooftop stunt, the model was filmed spooning batter on herself, saying:

"I'm getting ready to go for my new job, I'm so freaking nervous right now. But you know, craziest girl so let's do this."

She then gave her body a sexy shake and shouted: "Do you like my donuts?

"I need some extra money for the holidays and I saw this donut shop and the ladder was waiting there for me so I'm going to climb up there and see if I get hired. I'm going to sell a lot of donuts! Let's go!” exclaimed Francia.

First, she planned to parade around the store for the video but once she saw a ladder leaning conveniently against the wall the prankster’s plan changed in an instant.

Her assistant, filming the stunt, said:

"So we were basically going to film on the ground and there was workers fixing the air conditioning. There was a ladder there so she just ran up, it was kind of like fate."

While many onlookers were amused by the stunt, Randy's Donuts didn’t seem to appreciate the extra publicity. It was the safety hazard that worried them. They insisted they hadn’t been informed of the incident.

In a letter, the owner of Randy's Donuts stated they were not aware filming was taking place and issued an urgent alert to everyone that it is unsafe to climb on to the store's roof.

Francia has since posted the video on to her Instagram page, with the caption: "Do you think I'll get the job?"

While many fans appreciated the saucy prankster’s humour and left comments like:

“Well, that's what I'm talking about, If I was the owner of this shop I would definitely hire you!”

“I swear this chick is crazy as hell but in a good way lol. It must be a lot of fun to date you!”

"I think a resume would work fine as well but do what you do to get the bag."

Other netizens took a dim view, thinking the stunt was ridiculous, writing:

“Just to make money or some views, you are trying to make yourself a joker. Search for some job instead of being crazy.”

Randy's Donut shop is an iconic landmark and has been featured in several films, including Iron Man 2, and Justin Timberlake's music video for "Can't Stop The Feeling".

Instagram Model Brags About $78,000 She Made Selling Underwear Photos