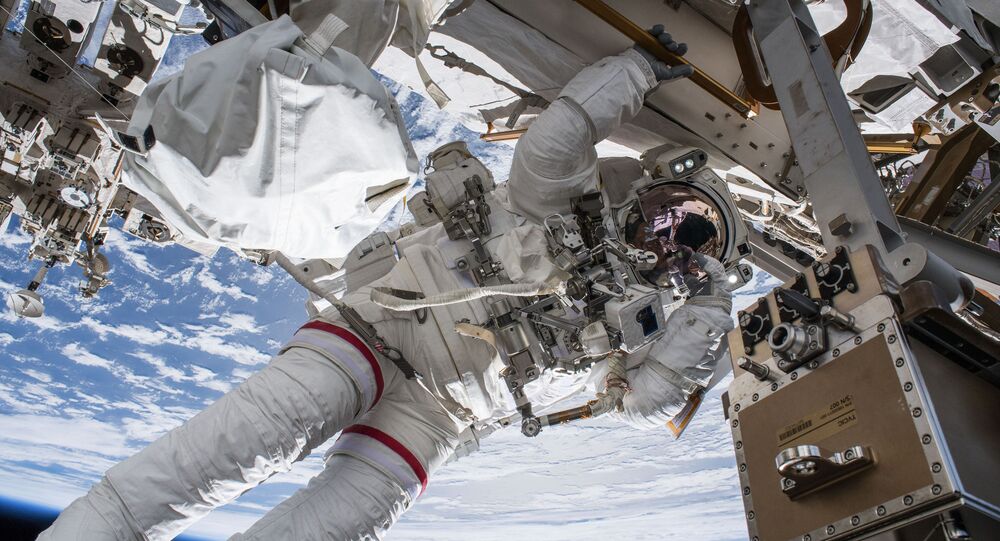 The debate was sparked by a conspiracy channel that posted two clips of a crescent-shaped object floating around NASA astronauts during a spacewalk at the International Space Station. Some immediately linked it to a proposed branch of the US Armed Forces announced by US President Donald Trump.

The footage, claimed to be taken during a spacewalk by NASA astronauts at the ISS, was posted on YouTube by a conspiracy channel, prompting some commenters to allege that the proposed Space Force is already on duty. The clips feature a long object drifting near the spacewalkers that resembles a cloud. However, a closer look raises doubts about this, as the channel implies.

According to MrMBB333, who titled one of his videos “RARE Video Footage of ‘Alien Space Craft’ WATCHING ISS Astronaut! WHO are they?”, the thing has windows as well as obscure contours.

"You're going to see the object come into view multiple times from multiple different angles. I've put it in slow motion, look at it right there, unbelievable", the conspiracy theorist claimed in the video, zooming in on the object.

In comments, suspicion fell on a proposed special branch of the US Armed Forces, the Space Force, as one of the commenters suggested that it might already be operational.

"Rather odd that the astronaut does nor seem to look over...they must be aware and know it's secret Space Force", one of them posted.

Others were more down-to-earth, suggesting that it seemed “to roll like possible junk”.

“Looks like a small part of equipment for the ISS to me”, a user under the handle Hadley CapeBreton posted.

US Government
US 2020 Defense Budget May Lack Funds to Cover Trump's Space Force
Some, however, were sceptical about the video, suspecting that either CGI was at play or overly active imagination.

“Looks like something poked thru their green screen of CGI earth”, one of the users jokingly posted, while another noted: “It's time in the plan to make us believe aliens arrived on earth”.

Star Wars allusions could not be avoided as one of the commenters suggested: “The Millennium Falcon is real!!!! Well half!”