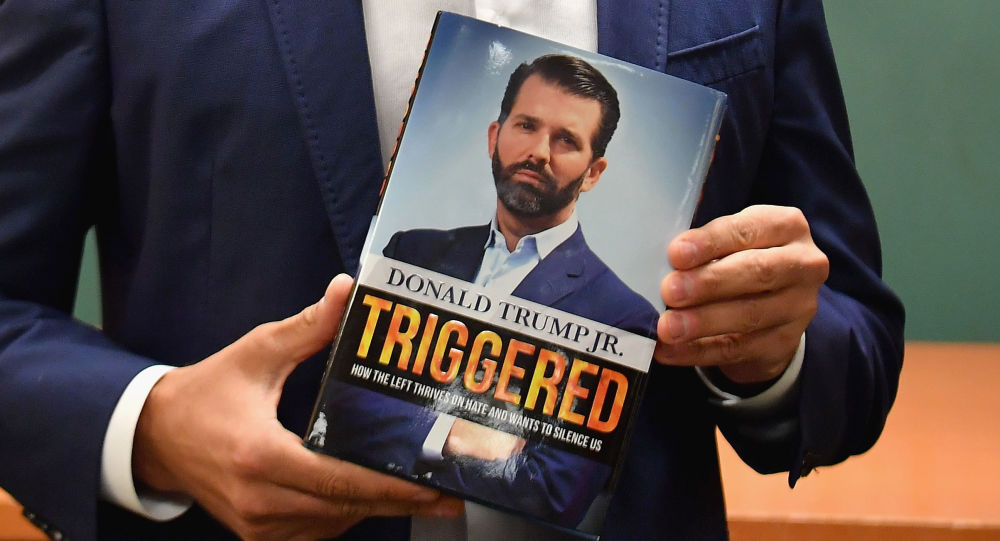 In his “Triggered” book, Donald Trump Jr explains, in particular, how he has been a victim of “shadow banning”, namely, how he faced having his content blocked by other users on social media.

Donald Trump Jr’s own supporters have not thought twice before heckling the US President’s son after being informed that he did not have time to take their questions during a promotion event for his book “Triggered: How the Left Thrives on Hate and Wants to Silence Us,” according to The Guardian.

Make America Great Again conservatives’ shouts of “USA! USA!” reportedly turned into louder chants of “Q and A! Q and A!,” shortly after Donald Trump J and his girlfriend Kimberly Guilfoyle appeared at the University of California’s overwhelmingly liberal Los Angeles campus on Sunday.

Did they ask him if he read the book

The pair at first tried to turn a blind eye to a row which showed no sign of abating after the 450-strong audience were told that they would not be allowed to ask questions “due to time constraints.”

© AP Photo / Matt York
‘There’s Nothing Harsh’: Trump Jr Bashes Instagram For ‘Biasly Deleting Photos’
Trump Jr then unsuccessfully attempted to assert that questions from the floor risked resulting in soundbites that can be abused and distorted by left-wing media.

When his reasoning with the crowd did not work, Guilfoyle tried to lend a hand by saying,”You’re not making your parents proud by being rude and disruptive.” Moments later, the couple walked off the stage.

Almost all Twitter users were ruthless toward Trump Jr, posting sarcastic tweets about what they described as a “hilarious” event.

This is hilarious. Maybe the crazies will wipe each other out.

You can’t answer questions if you didn’t write the book 📖 pic.twitter.com/3f6KGl3lJ9

This is only the beginning! pic.twitter.com/j5SGTfHvef

Donnie Junior triggered at his own “Triggered” book signing by HIS supporters? Hate to see it. #MAGA

I guess he was "triggered."

He's really proving that putting his face next to the word Triggered is a self tell, isn't he? #SAD #SnowflakeAsTheyCome

“He's really proving that putting his face next to the word Triggered is a self tell, isn't  he?” one user tweeted.

In his book, Trump Jr. claims that he receives the highest number of death threats in the country after his father, the president, and that social media have been “shadow banning” him.