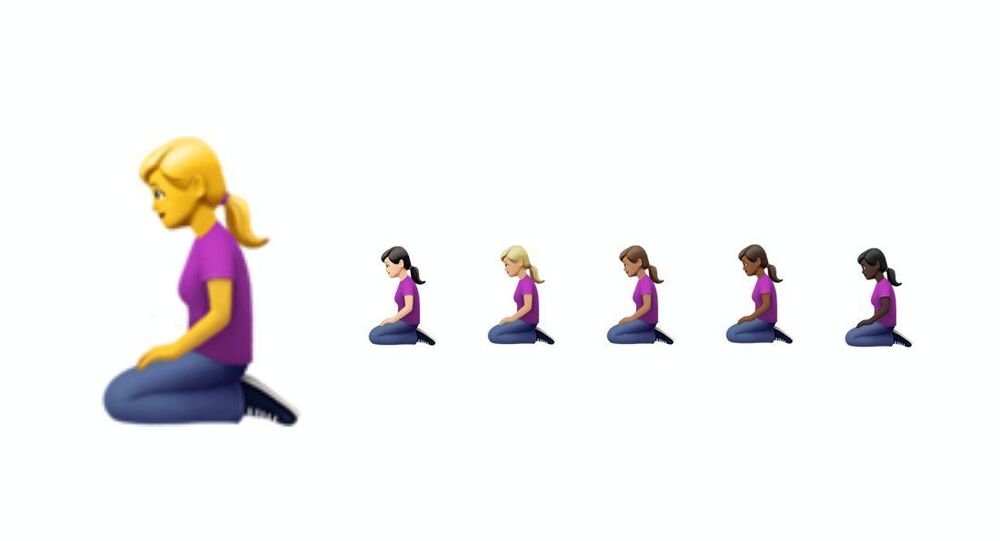 Earlier, Facebook imposed a ban on certain emojis with double meanings, such as the "eggplant" and "peach", that are popularly exchanged to symbolise male genitalia and buttocks in a bid to curb "sexual solicitation" on social media platforms.

Amongst the growing number of emoji options there is one that users are getting extremely excited over.

The new emoji is a cartoonised version of “a person kneeling on both knees”, according to Emojipedia.

​They “may be used to represent someone in prayer, or a person resting on the floor”.

The emoji has already set social media afire, with users letting their imaginations run wild as they offer lewd suggestions for what it can represent.

The options are far from innocent, with many social media users hailing it as the world’s first explicit oral sex icon.

Until now, anyone discussing oral sex via emojis had to use suggestive images.

The arrival of the new icon set folks into a tweeting frenzy.

What other scenario is there for w kneeling emoji lol

yeah nahhh this emoji gonna get abused with the eggplant😂😂😂

They also have man kneeling, but we know the dirty texts that will be utilizing these emoji. https://t.co/BO3MmbzCfn

We gon be sending this with the eggplant emoji 🍆

The hilarious comparisons come as Instagram and Facebook have banned the peach and aubergine emojis over reportedly “dirty misuse”.

The voluptuous fruits were removed from the platforms as part of an update to Facebook’s Sexual Solicitation Community Standards, which are aimed at sex workers who use the platforms to sell their services.

“People use Facebook to discuss and draw attention to sexual violence and exploitation. We recognise the importance of and want to allow for this discussion. We draw the line, however, when content facilitates, encourages or coordinates sexual encounters between adults.”

The new designs are part of more than 350 emoji approved earlier this year which have now been released to iPhone users as part of the iOS 13.2 update.

​Website Emojipedia, which is part of the Unicode Consortium, posted images online of the new gender-neutral emoji choices, as many character-based emoji now also include a gender-neutral option alongside a male or female version.

Last year, Apple said it wanted to improve the representation of those with disabilities, submitting a number of designs to Unicode.