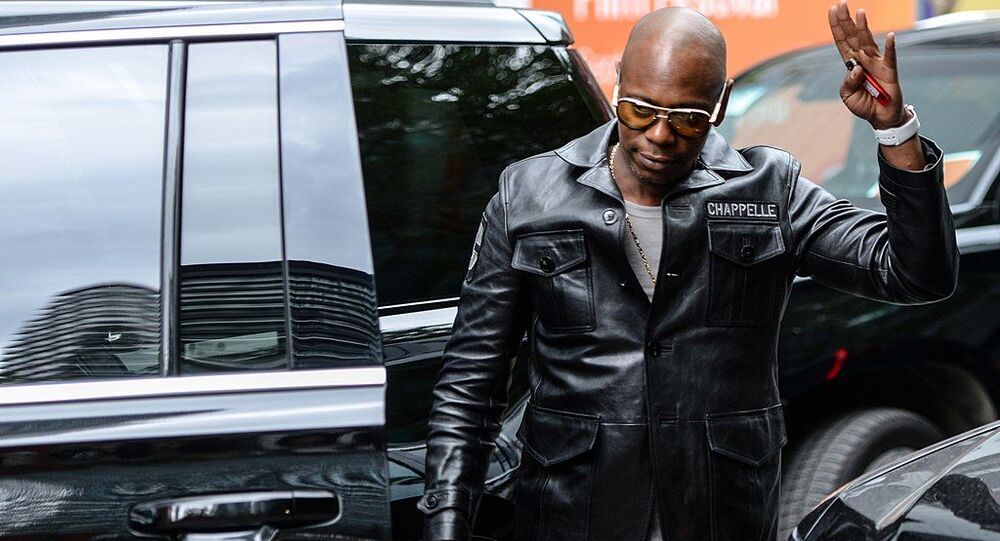 After his new show Sticks & Stones was lambasted in the media over jokes about moral policing, the veteran comedian was awarded the Mark Twain Prize for American Humor in Washington DC. Accepting the award, he chose to defend the freedom of expression.

Dave Chappelle has inflamed social media with his speech at the Mark Twain Prize for American Humor, noting that the “country’s getting a little tight”. Although the acceptance speech is to be aired in January on PBS, USA Today has reported the highlights.

The stand-up veteran who was honoured with the prestigious award, marking achievements in humour, entertained the crowd, which included comedians Sarah Silverman, Aziz Ansari, Jon Stewart, and Tiffany Haddish as well as House Speaker Nancy Pelosi and Rep. Adam Schiff, with a provoking monologue.

“The First Amendment is first for a reason. The Second Amendment is just in case the first one doesn’t work out. The country’s getting a little tight. It doesn’t feel like it’s ever felt in my lifetime”, he said.

He also branded stand-up comedy “an incredibly American genre”, with Chappelle reportedly adding: “I don’t think any other country could produce this many comedians”.

His First Amendment joke has left the Twitter audience in awe.

Can't wait to watch his acceptance speech in January https://t.co/jNlk0s8cHW

​Some were more concerned about his take on the Second Amendment and praised him for it.

I can’t confirm if Dave said that or not, but I do know for sure that he’s #2A advocate. He’s for guns.https://t.co/JdyLAZYSdr

Dave Chappelle out here voicing the importance of the Second Amendment...again! Legend @DaveChappelle #2A

“(I) don’t get mad at ’em, don’t hate on ’em,” he said. “Man, it’s not that serious. The First Amendment is first for a reason. Second Amendment is just in case the first one doesn’t work out.” - Dave Chappelle

​Others predicted that such jokes could get him banned.

Imagine. Most "Millennials" would try to ban @DaveChappelle from College Campuses. https://t.co/4nf1njNzJH

​Chappelle received the prize hot on the heels of the uproar around his new Netflix special Sticks and Stones, in which he took aim at the so-called cancel culture and joked about LGBTQ people, or "the alphabet people" as he defined them, and the “celebrity hunting season”, meaning accusers stepping forward to blame famous people for misdeeds in the past.

“Uh, Duh… Hey, der, if you do anything wrong in your life, and I find out about it, I’m going to try take everything away from. I don’t care what I find out. It could be today, tomorrow, fifteen, twenty years from now — If I find out, you’re f*cking….duh…finished”, he said, addressing the crowd before revealing “That’s you”.

Since the show has provoked such a string of negative comments in the media, he decided to comment on the reaction while on the red carpet at the Mark Twain Prize for American Humor, The Hill reports.

“We all want to live in a polite society; we just kind of have to work on the levels of coming to an agreement of what that actually looks like. I, personally, am not afraid of other people’s freedom of expression. I don’t use it as a weapon. It just makes me feel better. And I’m sorry if I hurt anybody”, Chappelle explained before concluding in his own manner “Yada, yada, everything I’m supposed to say”.