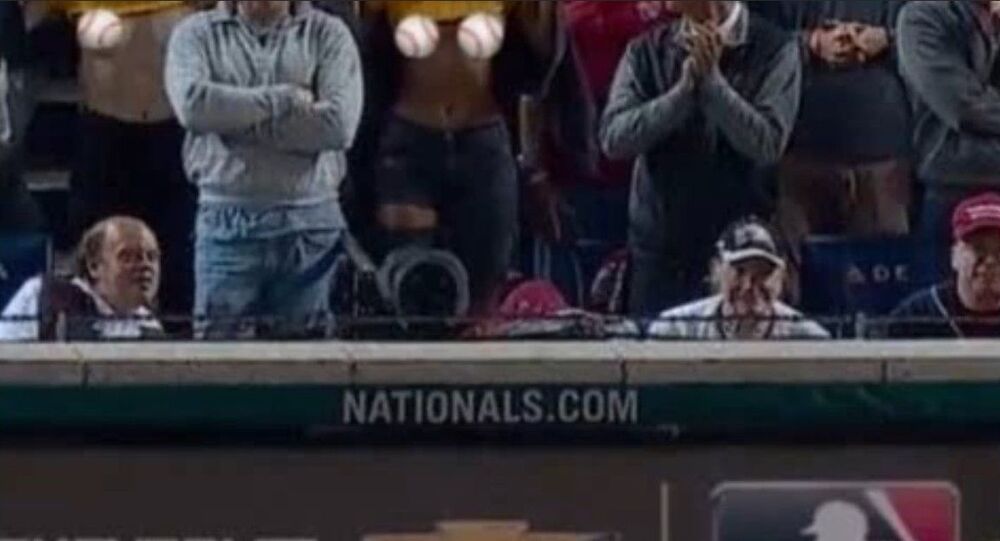 In an unexpected turn of events, the standout stars from Game 5 of the 2019 World Series ended up being three women in the stands who chose to use their chests to express breast cancer awareness.

While US President Donald Trump was receiving boos from the crowd during Sunday night’s game in Nationals Park between the Washington Nationals and Houston Astros, three women caught the nation’s attention by flashing their boobs in the name of breast cancer awareness.

The trio of flashers, later identified as Julia Rose, Lauren Summer and Kayla Lauren, provided Houston Astros pitcher Gerrit Cole and live Major League Baseball (MLB) viewers with quite an eyeful once they lifted their shirts up at the bottom of the seventh inning.

According to a Twitter post from Summer and several interviews following the flash, the women chose to free their nipples in conjunction with the US’ National Breast Cancer Awareness Month.

However, it appeared the women’s stunt received a swift response from the MLB. Rose, who is the founder of adult digital magazine SHAGMAG, revealed that she, along with her friends, were not only banned from all future MLB games, but also “all Major League Baseball stadiums and facilities, indefinitely.”

“On October 27, 2019, you attended World Series Game 5 at Nationals Park in Washington, D.C.,” David Thomas, MLB vice president of security and ballpark operation, allegedly wrote. “During the game, you violated the fan code of conduct by exposing yourself during the seventh inning in order to promote a business. You were also part of a scheme in which you induced others to expose themselves to promote the business. You are hereby banned from all Major League Baseball stadiums and facilities, indefinitely.”

The “business” referenced in the letter apparently relates to SHAGMAG, despite the business’ name being hidden once the women’s matching shirts went up Sunday night.

While Rose’s Twitter posting of the letter has amassed well over 100,000 likes and nearly 14,000 retweets, it would appear not everyone is buying the expedited delivery of the ban.

Stadiums ban specific people, the @mlb does not. In addition, violators are required to sign a paper acknowledging the ban and that attendance at that park will result in trespassing.

This is a poor job of attention seeking.

I'm wondering how they sent/handed her a typed and signed paper on official letterhead within 2 hours of the incident.

This is fake. The mlb doesn't ban people from all events, that's up to individual stadiums. Also, there's no way they already sent you a signed letter with their letterhead in the two hours since the game.

This is fake but still pic.twitter.com/tTpEHDrn0c

Whether the MLB letter is real or fake, the women appeared to pique the interest of several fans.

Thank you for your sacrifice

Thank you for your sacrifice. pic.twitter.com/hhyYrnDh8J

Worth it. I would like to extend an invitation for you to show your tits at my local Dodge dealer before TRUCKTOBER ends as well. It may convince them to let you go home with a Dodge Ram for 0 down & 0% APR financing... 😏

That’s OK. Here’s something instead that will cheer you up: you can get a VIP pass to the next Nails signing. PS I’ll sign whatever you want me to ; ) #WorldSeriesBoobs

You are an American hero