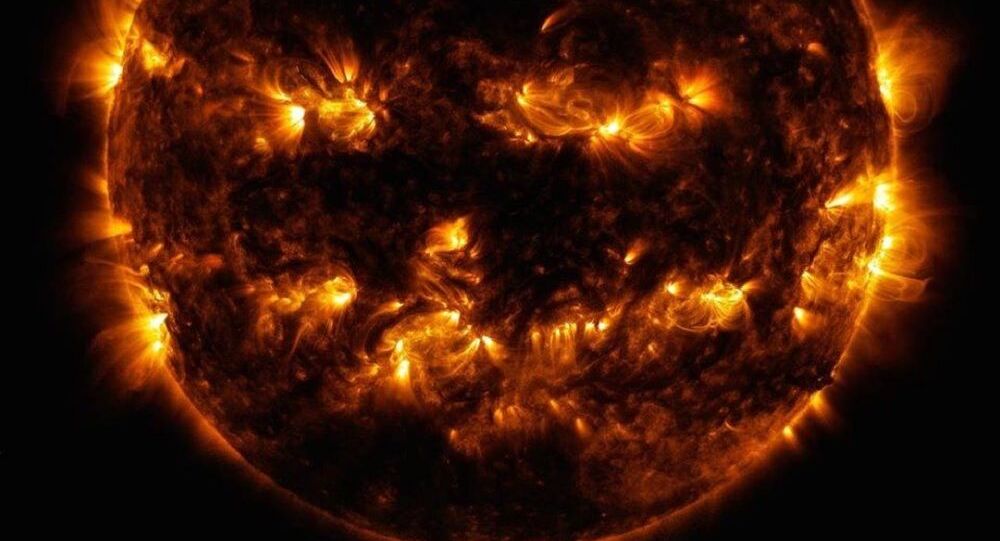 Trick or Treat’ From the Sun? NASA Posts Creepy Photo of Flaming Star in Halloween Mode

While preparations for the Halloween holiday are unfolding around the world, the US National Aeronautics and Space Administration (NASA) decided to contribute their take on the holiday, by posting a spooky picture of the Sun that looks just like a jack-o’-lantern.

US central space agency NASA turned to Facebook on Sunday to post a scary- looking picture of the Sun that vividly resembled the symbol of the Halloween season, a jack-o’-lantern.

“Even our star celebrates the spooky season,” the agency wrote in the post.

The flaming giant was pictured on 8 October 2014 by NASA’s Solar Dynamics Observatory that tends to continually observe the Solar System’s central star and monitor its activity from orbit in space.

Although many Facebook users doubted the authenticity of the picture, suggesting that it was probably photoshopped to resemble an episode of the popular science series “Doctor Who”, many netizens confirmed that the image was already circulating on the Internet back in 2014, suggesting that the Sun was inviting earthlings to engage in the “Trick or Treat” ritual.

“See scientists do have a sense of humour. Though it actually is a photograph of the Sun,” one Facebook user reacted to the photo.

NASA said that a spooky combination of colours resembling the face was the result of active regions of the Sun emitting more light than others while indicating a complex combination of magnetic fields fluctuating in the star’s atmosphere.

“They are markers of an intense and complex set of magnetic fields hovering in the sun’s atmosphere, the corona,” the agency said on their website back in 2014. “This image blends together two sets of extreme ultraviolet wavelengths at 171 and 193 Ångströms, typically colourized in gold and yellow, to create a particularly Halloween-like appearance”.