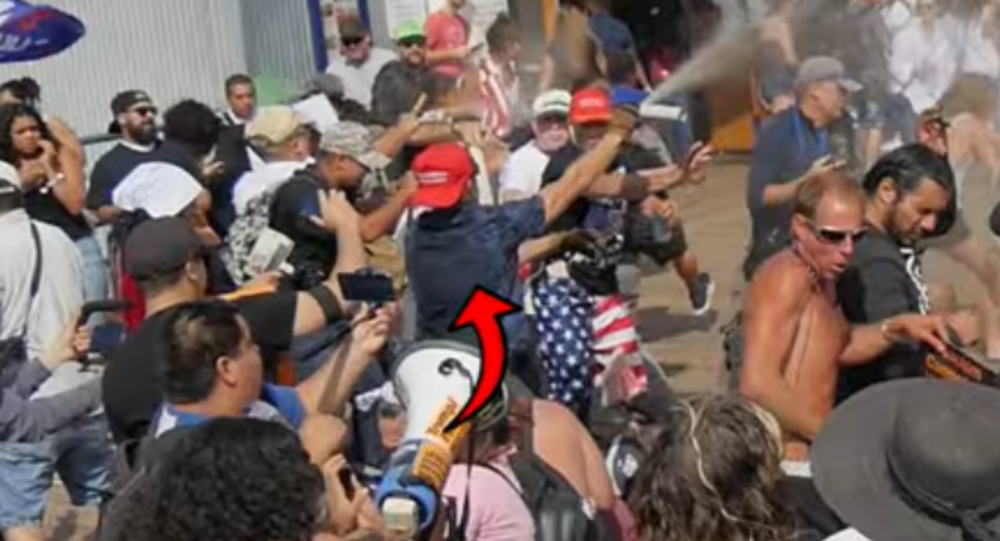 David Dempsey, 32, was arrested on Saturday at the Santa Monica Pier in California after spraying bear repellent into a crowd of anti-US President Donald Trump protesters.

Video footage of the incident shows Dempsey wearing a “Make America Great Again” (MAGA) hat and spraying the repellent into a crowd at the popular tourist destination.

At one point, he is seen spraying a man on the ground directly in the face as bystanders try to stop him. The video also shows people running away from Dempsey, shouting and coughing. One witness told local outlet KRON4 that a woman started vomiting because of the pepper spray.

In another video, Dempsey can be seen telling police at the site of the incident that he was “attacked” by the anti-Trump demonstrators.

“It’s these “f**king libtards over here, these commies,” he is heard saying to a police officer. “I didn’t do anything.”

According to some outlets, another man also sprayed anti-Trump protesters with pepper spray. However, police are currently working to determine the identity of that individual, who is believed to be an older man.

​Dempsey was booked on suspicion of illegal use of tear gas, assault with a caustic chemical and parole violations on Saturday, according to the Huffington Post. Jail records at the Los Angeles County Sheriff’s Department reveal that Dempsey, who is being held without bail, is due to appear in court Tuesday.

According to NBC Los Angeles, no one was seriously injured as a result of the incident, although five people were treated by paramedics on-site.

Court records obtained by the Santa Monica Daily Press reveal that Dempsey was convicted of burglary in 2006 and 2009. He was also convicted of larceny and conspiracy in 2012.