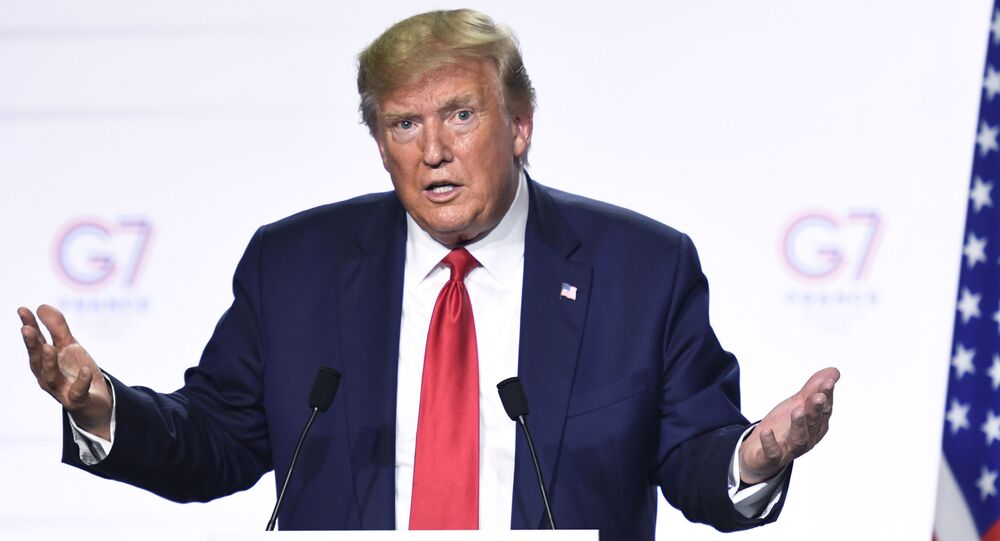 ‘We’ll Find Someplace Else!’ Trump Explodes Amid Cancellation of G7 Summit at His Miami Resort

The US president cancelled his earlier decision to hold the next G7 summit at the Trump National Doral in Florida following criticism from both Democratic and Republican politicians.

Donald Trump lashed out at his Democratic critics following backlash over his proposal to hold the next G7 summit at a Miami resort owned by his family. While the decision was eventually cancelled on Sunday after several Democrats and ethics watchdog groups raised their concerns over Trump potentially benefitting from hosting the event at his property, the US president responded furiously, saying that the Florida resort would have been “the best” place to hold the conference.

“Doral in Miami would have been the best place to hold the G-7, and free, but too much heat from the Do Nothing Radical Left Democrats & their Partner, the Fake News Media!” Trump wrote in a tweet.

Doral in Miami would have been the best place to hold the G-7, and free, but too much heat from the Do Nothing Radical Left Democrats & their Partner, the Fake News Media! I’m surprised that they allow me to give up my $400,000 Plus Presidential Salary! We’ll find someplace else!

​Some netizens understood Trump's frustration, while some netizens came up with a bunch of memes, following reports that bed bugs had previously been detected at the resort.

Heard the entertainment is fire! 🔥 pic.twitter.com/L1URxeqEXK

The US president earlier said that he was trying to do “something very good” by hosting the international summit at his family’s resort, which would have come at “zero cost to the USA”, arguing that the area had all the necessary facilities for the gathering, while also being located close to Miami International Airport. It was thus “crazed and irrational hostility” from the media and Democratic Party, according to Trump, that forced him to drop the preferred option to host the G7 at his property.

.....its own 50 to 70 unit building. Would set up better than other alternatives. I announced that I would be willing to do it at NO PROFIT or, if legally permissible, at ZERO COST to the USA. But, as usual, the Hostile Media & their Democrat Partners went CRAZY!

The White House's announcement that it was planning to hold the 2020 G7 summit at the Trump National Doral met with strong criticism from Democratic Senators Gary Peters, Ron Wyden and Sherrod Brown, as well as Republicans Gov. Bill Weld and former Rep. Mark Sanford, who found the decision to be in breach of the Emoluments Clause of the US Constitution, which prohibits the president from accepting payments from foreign countries, US states, or the federal government.

The Rules Committee was set to meet on Tuesday with the aim of "opposing President Trump’s decision to hold the 2020 G7 at the Trump National Doral golf resort”, but Trump’s decision to do away the option was made earlier. The White House will now look for another venue to host the G7 summit, which is set to take place on 10-12 June 2020.