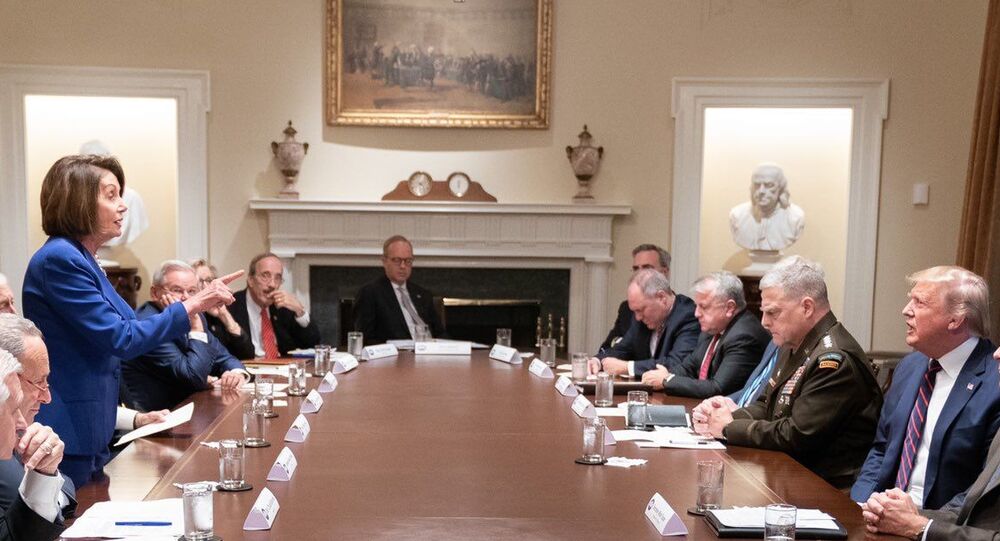 From Capitol Hill to the Twitterverse, US President Donald Trump and House Speaker Nancy Pelosi wasted no time letting the American people know how they really felt about each other’s alleged conduct during their first face-to-face meeting since House Democrats launched an impeachment inquiry.

Moments after their early exit from a White House meeting on Syria, Pelosi and Senate Majority Leader Charles Schumer held a press conference to inform the public that Trump had an outburst in which he called the speaker a “third-rate politician” and made a number of other comments they deemed unacceptable.

Schumer: "He was insulting, particularly to the Speaker."

Hoyer: "We were offended, deeply, never have I seen a president treat so disrespectfully a coequal branch of the government."

“Now, we have to pray for his health - because this was a very serious meltdown on the part of the president," Pelosi told reporters Wednesday afternoon.

Trump, who, according to NBC News recently spent his 237th day on a golf course since taking office 999 days ago, took the “Do Nothing Democrats” to task by tweeting multiple images from the meeting.

The Do Nothing Democrats, Pelosi and Schumer stormed out of the Cabinet Room! pic.twitter.com/hmP4FNhemv

In one image, Trump flipped the script on Pelosi and accused her of having a meltdown and being “unhinged,” which is ironically the title of former Director of Communications for the Office of Public Liaison staffer Omarosa Manigault Newman’s book, in which she detailed her tenure in the Trump administration. Like Pelosi, Omarosa has accused Trump of being mentally unwell, but took it a step further in her book by claiming he may be suffering from dementia or Alzheimer’s, which runs in his family.

Pelosi nonverbally responded to the president’s Twitter barrage by switching her cover photo to the image of her allegedly “unhinged” outburst.

Thanks for the new cover photo @realDonaldTrump! pic.twitter.com/bUatLr5S7D

Despite her silence, Trump appeared to have heard her loud and clear, as in a subsequent tweet Wednesday evening he slammed the speaker as “a very sick person” who may have something wrong “upstairs” and is in need of prayer - perhaps mocking Pelosi’s earlier comments on his own mental health.

Nancy Pelosi needs help fast! There is either something wrong with her “upstairs,” or she just plain doesn’t like our great Country. She had a total meltdown in the White House today. It was very sad to watch. Pray for her, she is a very sick person!

Netizens, naturally, also joined in on the Twitter tennis match of insults.

About as much as she does: pic.twitter.com/TFcdviVYmk

I'll let your previous words speak for themselves. :) pic.twitter.com/J7r5r5b2h7

Cardi B, Chance the Rapper Believe Trump Will Get Re-Elected Because He Has ‘the Biggest Base’

Republican Lindsey Graham: Erdogan Made "Phone" Commitment to Trump Not to Enter Kobani