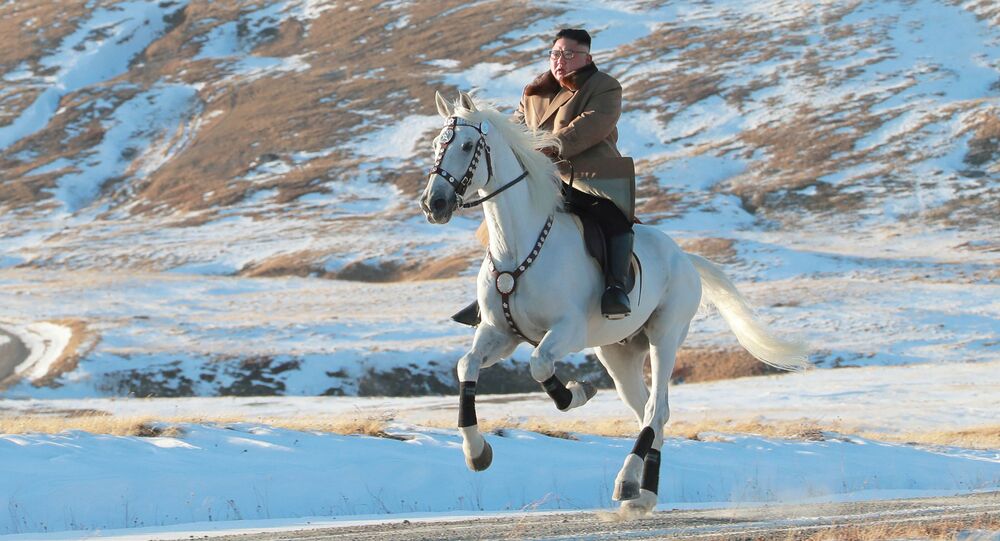 It is claimed that the North Korean leader Kim Jong-un has often scaled the sacred mountain Paektu at times of major policy endeavours, with analysts mulling over the symbolic portent of the trips.

In a series of photos released by state news agency KCNA, North Korean leader Kim Jong-un is pictured riding a large white horse through snowy fields and woods on Mount Paektu, the spiritual homeland of the Kim dynasty.

“His march on horseback in Mt Paektu is a great event of weighty importance in the history of the Korean revolution. Having witnessed the great moments of his thinking atop Mt Paektu, all the officials accompanying him were convinced with overflowing emotion and joy that there will be a great operation to strike the world with wonder again and make a step forward in the Korean revolution,” KCNA added.

The trek was reported to mark the first snowfall of the season at the mountain that's revered in North Korean culture, yet analysts tend to claim there is a larger emblematic meaning behind this.

Kim Jong-un has been known to make trips to the sacred mountain ahead of important policy shifts or undertakings, and the current one may contain inherent symbolism regarding the country’s course of policy for 2020, as the country faces international sanctions and pressure over its nuclear weapons and ballistic missile programmes.

In 2018, Kim took South Korean President Moon Jae-in to the mountain as part of a historic summit.

In April this year, Kim Jong Un has said he will wait only until the end of 2019 for the US to soften its stance in denuclearisation negotiations before North Korea pursues an unspecified new path forward.

Kim Jong Un and US President Donald Trump met twice, in Hanoi in February and Singapore in June, failing to agree on a deal to lift sanctions in exchange for North Korea abandoning its nuclear and missile programs.

In the Twitterverse, Kim’s latest horseback hike fired users’ imaginations, as they compared the images with those of Russian President Vladimir Putin riding bare-chested:

First Putin on a hours, now Kim, please Donny, don’t do it

First we had Putin on horseback, now we have Kim Jong-un ... let’s not go there shall we, Boris?? https://t.co/gL1LzPHpMJ

​Some netizens drew parallels with western books, and movies, including Game of Thrones, Lord of the Rings and The Chronicles of Narnia.

Winter Is Coming. And there is a King In The North pic.twitter.com/gYjgBZMO8H

Not sure why but this one has much more of a "Narnia" vibe. I think I can see a lamppost behind him pic.twitter.com/BKyQokKUcX

We're going beyond the Wall. But this Wall is Decadent Western Culture.

Alternative headline: ‘Horse forced to climb highest mountain with significant weight on its back’ 🙄 https://t.co/5mUHYBxGVn

you've got to feel for the poor horse!

I’m sure the horse thought it was a weighty experience alright. How important? You’d have to ask him.

As an avid horseback rider, I’m *dying* over the photos of Kim Jong-un riding the white horse.

This is NOT the look of a man who knows what he is doing. I would give anything to see the video. #NorthKorea #KimJongUn #WhiteHorse pic.twitter.com/MLJTCuIG56

​The fact that netizens were quick to see the similarity between the North Korean leader’s photo series and high-profile macho photos of Russian President Vladimir Putin is no surprise.

Such images have been an inalienable part of the Russian president’s public image for the past several years, showing him performing a butterfly stroke through a river, bare-chested on horseback and diving down to a seabed.

Analysts have interpreted them as a move to present the president as a healthy, energetic, clean-living leader.