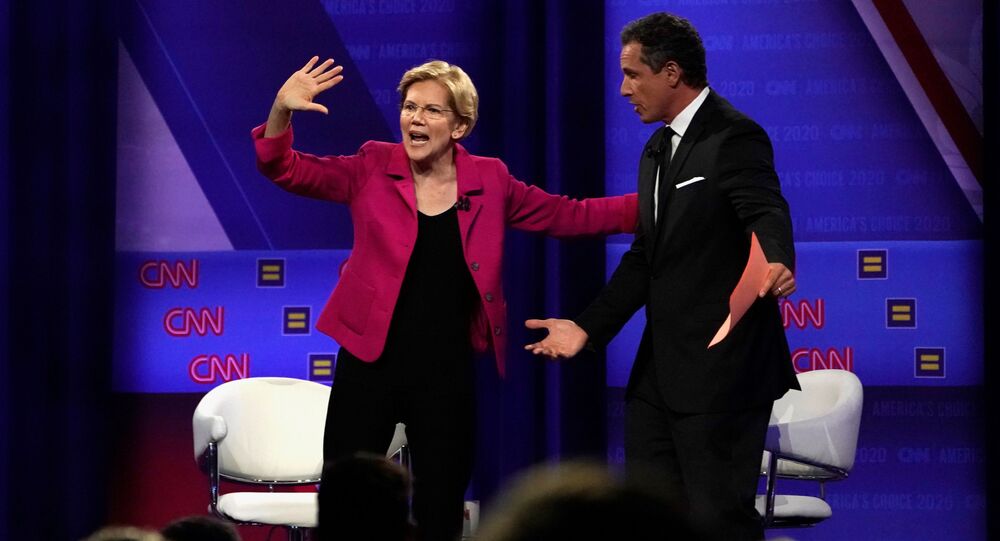 The One: Elizabeth Warren's Joke About 'One Man, One Woman' Marriage Sets Twitter Alight

The social media crowd’s response to Warren’s tongue-in-cheek remark was a somewhat mixed one, as netizens seemed either amused with her wit or displeased by the fact that she essentially did not answer the question she was asked in the first place.

US senator and presidential candidate Elizabeth Warren was thrust into the spotlight both offline and online while attending CNN's LGBTQ Town Hall in Los Angeles on 10 October.

During the event, Morgan Cox, chair of the Human Rights Campaign Board of Directors, brought up what the media outlet described as a "potential faith-based argument against same-sex marriages", asking Warren how she would reply if an "old-fashioned" supporter told her that they believe marriage is between one man and one woman.

"I'm going to assume it is a guy who said that. And I'm going to say, 'Well, then just marry one woman. I'm cool with that'," she said, pausing slightly before delivering the punchline: "Assuming you can find one."

Warren’s response elicited a somewhat mixed reaction online, as while some social media users praised her for her quick wit, others argued that the senator did actually answer the question she was asked in the first place.

Perfect response. :) I mean, there are Jewish people who won't mix meat and dairy because their faith says so but they aren't worrying about people ordering pepperoni pizza... why does anyone care so much what other people do? Marry a woman and be straight and leave people alone.

What I found even more disturbing than the joke answer ~ was the fact that Liz couldn’t “ remember” if she ever opposed same sex marriage.

I mean seriously?
Why couldn’t she just be truthful ~ she was a Republican ~ of course she did.
Why can’t she be honest?

No. Once AGAIN she does not answer the question that was asked. She does that a lot. Being folksy and funny without answering the question is a problem.

The answer Liz Warren delivers in this moment tells me so much - Liz has a quick mind, thinks on her feet, has a great sense of humor, she's pragmatic, she's not intimidated and she's coming into her own right before our eyes. If nothing else, Warren's campaign is winning fans.

Again, the woman with zero history of fighting for LGBTQ rights in her past dodges a legit question.

Elizabeth Warren, a US senator from Massachusetts, recently managed to take a narrow lead over former Vice President Joe Biden for the first time in a major national opinion poll.