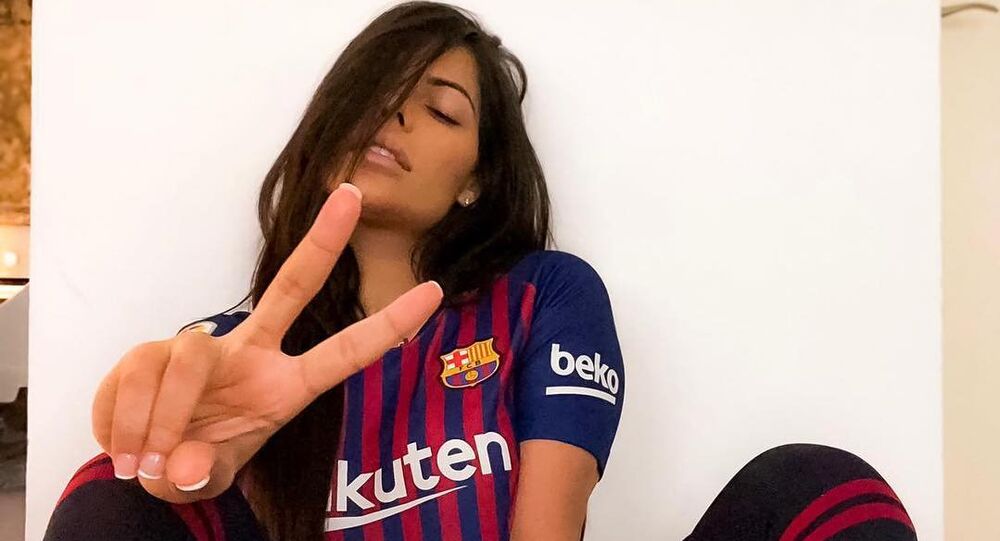 Barcelona FC’s superstar striker Lionel Messi might have missed the start of the Spanish La Liga season due to a calf injury, but he is back and ready to win, as the Catalans’ smashing 4-0 victory over Seville has shown. Suzy Cortez, who is the GOAT in her domain of outstanding curves and a vocal Messi fan, cherished him in her own signature way.

Brazilian-born Suzy Cortez, who made history this year by becoming the first model to be crowned Miss BumBum World for the second time, has paid a tribute to one of her passions, star footballer Lionel Messi and his club Barcelona, with a daring snap. The diva with the prize-winning derriere posted a picture of herself wearing a Barcelona Number 10 jersey and showing the V-sign in front of a TV showing the Catalan club’s game against Sevilla.

However, it was not the events on the pitch that the composition was centred around. Instead, Cortez put her derriere in a thong at the forefront, probably making it hard for some of her followers to concentrate on the field.

"Let's go Barça! Today started the goal season of the best in the world", the beauty wrote in the caption, tagging the Argentinian striker.

While some netizens seemed to remember that it is football that the picture was about, posting ball emojis, others apparently were more excited about what nature and physical training had gifted Miss BumBum, leaving comments like “Nice Buns” and “I love you”.

Whether Cortez’s famous rear end turned out to be a lucky charm for Barcelona FC or not, they eventually won 4-0, with Lionel Messi scoring the fourth goal.

Although Cortez comes from Brazil, it is the Argentinian forward who has stolen her heart, as she has repeatedly demonstrated. In one of her posts, featuring Cortez in Messi’s jersey, she hinted that there is a link between him and her, as she won the Miss BumBum World titles in 2015 and 2019, when the 32-year-old was singled out as the best men's player, according to FIFA.

When he got his Best FIFA Men's Player title this year, she posted: "If football had another name it would be MESSI. He is the best player in sporting history". She did not stop at one post, however, as she shared several snaps of herself with nothing but golden G-strings and golden body paint on while holding a gilded ball – a tribute to Messi’s four Ballon d'Or awards.

The model, who has a two-million-strong following on Instagram, even risked disappointing her Brazilian fans, voicing support for her homeland’s bitter rivals Argentina and its talisman in the Copa-America semi-finals.

"Fan number one! I love football and for the sake of the sport today I'm cheering for the victory of the best player in history Lionel Messi and Argentina in Belo Horizonte," she posted.