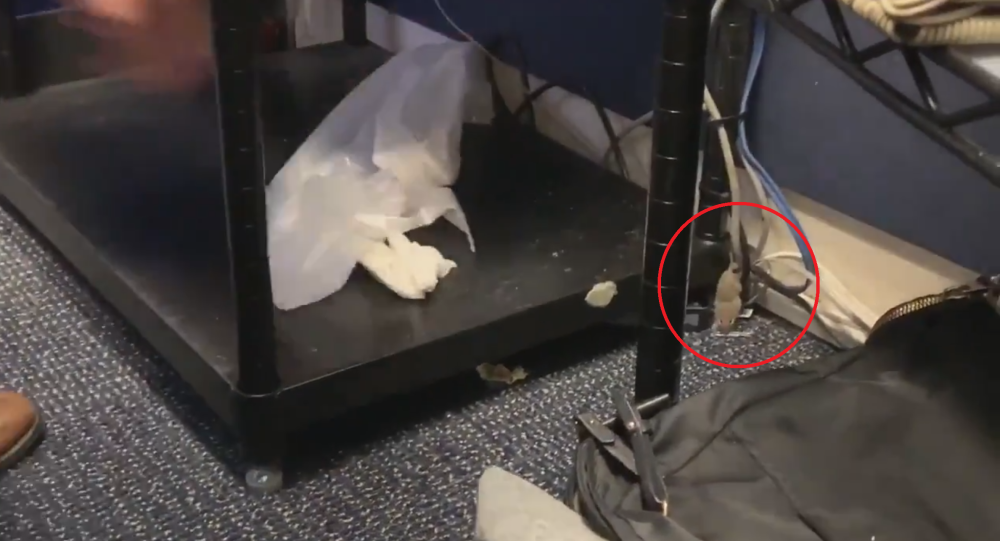 An uninvited guest literally dropped into the White House press briefing room, sending reporters into a tizzy and social media users into a rodent-related roast of US President Donald Trump’s impeachment inquiry.

NBC News White House Correspondent Peter Alexander acted as a cushion after a helpless mouse plopped down from the ceiling and became the hottest topic in the White House briefing room Tuesday morning.

And here’s the video to prove it: pic.twitter.com/v6uSrh7KPH

While some reporters cowered in fear of coming into contact with the unofficial White House resident, others attempted to capture the mouse. Senior White House Reporter for NBC News Digital Shannon Pettypiece dubbed the hunt “the most excitement in the White House briefing room in months.”

The most excitement in the White House briefing room in months. Reporters attempt to capture a baby mouse that fell on ⁦@PeterAlexander⁩ lap moments ago pic.twitter.com/6zWRZfTAaq

The young rodent’s presence came about just a few months after the White House’s senior occupant dubbed the city of Baltimore a “disgusting, rat and rodent infested mess.”

As a result, netizens had a number of takes on the mouse’s drop-in and instructed the president to not hurl rodent-related insults if those same animals scurry within his home’s walls.

@realDonaldTrump Says Baltimore is rodent infested. However, why did a mouse fall from the ceiling onto a reporters leg today in the White House briefing room? This is not the first time. Years ago @edhenry swatted one that fell from the ceiling and hit his keyboard.

Mice in the White House! How ironic after Trump tweeted this about Elijah Cumming's Baltimore district in July:

But Baltimore, right?!!! This Potus & his admin are the ones bringing the roaches & rats wherever they go. https://t.co/fubOA0FnMw

I thought rats only infested Baltimore.

In July, Trump tweeted that Rep. @RepCummings ‘s district in #Baltimore was a “disgusting, rat and rodent infested mess.”

This morning, in the White House that Trump currently occupies, a mouse fell out of the ceiling and into the lap of reporter @PeterAlexander .

In addition to references related to the Democrats’ impeachment inquiry into Trump, many also drew comparisons between the rodent and the current administration and its loyalists.

Has Ghouliani moved in yet?

Are they dropping from the ceilings now?

You think they would be used to rats in the white house by now.

“Which nicely bookends the unrelated rat hunt in the White House itself.” https://t.co/CtU07ECgy0

The White House is clearly a rat infested mess. No human beings would want to live there. Luckily, at present, none do... https://t.co/rDAhpYZdYu

According to the Washington Post, the mouse evaded capture and scurried to another part of the White House.